If we are already talking about the Los Angeles Rams journey to the Super Bowl, let's plunge a little into the story. No need to dig far - the current era of the club began with moving to California from St. Louis.

Stan Kronke was about to invest in this project. Guarantor of his serious intentions was the stadium, which is now under construction in Los Angeles and which Rams will move to in 2020. Hollywood Park will cost him more than a billion dollars.

It’s quite clear that Kronke is going to create a successful franchise in California.

Then the quarterback Jared Goff appeared in the team - a guy who at first seemed to almost everyone as a bast, especially against the background of Carson Wentz who was chosen next.

Now, perhaps, everyone will call this decision the right one. Like so many more management decisions. Unlike some of its neighbors in the city and state (and it's not just about the NFL), Rams management is distinguished by fairly balanced decisions. 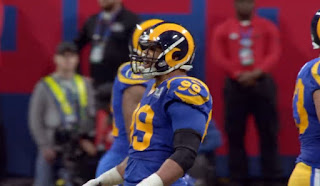 For a year and a half, the team traveled from 4-12 to the Super Bowl participant.

Over the years, the Rams leadership:

* Preserved in the team of Donald, Hecker, Zuerlayn, Brokers;

* Traded Kuks, Talib, Peters, Fowler (and during the season - and it was he, by the way, who provoked a decisive interception in the match with Saints);

* Signed from the market, Su, Shields and Anderson (which generally became a brilliant move)

And all this is within the salary ceiling. This is how the champion team is built.

Perhaps, for the first time about Rams as about the contractor they started talking en masse after Thursday's football against Minnesota. Jared Goff's incredible passes (5 touchdowns), Cooper Kapp's moves (two touchdowns and 162 yards), and the LA won 38 - 31.

Quarterback Wikings Kirk Cousins ​​spoke most clearly and capaciously after the match.

After that match, Rams themselves seemed to believe in themselves.

Match of the year

The Mexican Aztec, of course, works fabulous dol ... well, you understand. Could see the most productive Mandej Knight, and indeed the third most total game in history. 54-51, 105 for two, extravaganza!

The aircraft showed character, but also showed something else - then the most clearly reflected problems in the defense, or rather, in one of the components - the cover. Actually, more on that later.

Failure of the year

In that match, Rams did not have Akib Talib - he was injured in the third week against the Chargers, and returned only to the 13th.

It seemed that you can manage without him too - here you are both Peters, and Joyner, and Shields.

But no, without the Talib, LA cover became a sieve. Here are the eloquent statistics.

We will not go deep into the numbers, but we will give the most eloquent indicators.

With Akib in the composition, the touchdown ratio - interceptions from the opponent was 8-12.

Without Akib, Rams missed the most bigplay (pass for 20+ yards) in the league.

It seemed that Wade Phillips, an insanely experienced defense coordinator, could solve the problem of the Taliban dependency.

As it turned out, no - and it was lucky that he returned to the postsison.

Person of the Year

Sean McVay is one of the icons of the current NFL coaching workshop. Anticonservatism, courage are combined with decent tactical training. Look at how Rams play in the attack: play-action, reverse, even use of all hosts, moderate distribution between the pass and the removal.

When Cooper Kapp got injured, Josh Reynolds began to take his place. But he made his debut a little earlier, and the first two combinations after his appearance - a short pass on Reynolds. Everyone immediately noted - McVey is handsome, because he throws the gray guy into the game, and does not give it to the main receivers, but then he lets him touch the ball and gain self-confidence.

Sean is basically a cool chess player. He knows how to adapt to the most diverse and most difficult situations. He works out the plan to the smallest detail, and always has a spare. Last year, he lost to Washington 20-27, which did not stop him from getting up at three in the morning the next day to begin preparing for Thursday's football against San Francisco. Then, after losing to his former team, Redskins, he promised himself never to panic again - and he does not panic. And how else to explain that he ordered a fake pant at 0:13 in his half of the field away against the Saints ?!

Unit of the Year

Here the front-7 and special teams will fight among themselves.

The first went to the postsison, and in addition to constant pressure (Donald, by the way, again the leader of the league in secs), they also learned to defend themselves against the removal. One touchdown and about a hundred yards in two playoff matches, especially with Dallas and New Orleans, is a very solid result.

You could just see the quintessence of the work of special teams in the match with the Saints. Perhaps, now Rams has the best kicker - panther combination in the league.

But not Hecker and Zuerlayn united! In any component, the special timber is the top.

For example, over the past two seasons, LA has three blocked antlers - the same as all the other 31 league teams combined.

Hecker and Zuerlain joined the team in 2012, and then John Fassel appeared on the team - the coordinator of the special teams, who set up this car. He is a genius!

Instability of the year

Old age is not joy, passion is not lavash.

O-Line Rams is a company of experienced old people, which has the ability to sprinkle sand on the lawn at the end of matches. To the right there are still relatively young Havenstein and Blythe, but the center and the left guard and tackle are real grandfathers. Andrew Whitworth, scary to think, 37!

Therefore, these guys do not pull the load throughout the season. Yes, this is really an elite on-line when it is in shape, but sometimes they will give out 3-4 games in a row in which Goff is crushed from all sides.

After the rest, they gave out their best match against Dallas in the divisional round - 250+ yards on takeaway, ONLY one pressure on the quarterback for all the snaps. This is, in principle, the best performance from any line of attack of the season.

But often it’s obviously difficult for them to keep pressure all 60 minutes. And that can be a problem.

What can the Pats beat?

The Patriots are the Patriots. Belichik can beat anyone and always, but Rams has a cool coach (the youngest Super Bowl player in history), a talented quarterback, one of the best defenses in the league, the best front-7 player, the most dangerous combination of early backs. New England are favorites, but far from unconditional. Rams are stubborn guys.
Not the best but still good.