Mahomes injury does not prevent the Chiefs from a comfortable victory

After two complicated weeks for the Kansas City Chiefs , where they came from consecutive losses, they were able to meet again with the victory. However, it was not at all as they wanted. An imposing 30-6 for the visit may seem misleading, as they got the win in exchange for a Patrick Mahomes retiring from the field for a knee injury. At the moment, the magnitude is unknown, but both spectators and analysts expect to see it soon back on the courts. 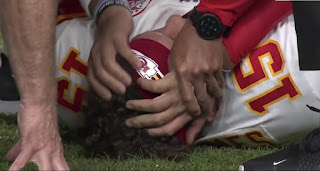 The match began with some Broncos on, since in the first offensive possession they scored a touchdown through the Running Back Royce Freeman . The locals attempted a two-point conversion, but failed in the attempt at Pro Bowler Phillip Lindsay .

From this moment, the Chiefs dominated the game on both sides of the court. The play following the Denver score, Mahomes connected with Mecole Hardman for the response of the visit. The Missouri controlled the offensive, and converted a pair of field goals to get away on the scoreboard. However, the last one would come at the expense of a one-yard run by the MVP , which caused the aforementioned knee injury.

From here, it was the defense of the Chiefs that led the game. With nine sacks in total, they destroyed an offensive line that did not live up to expectations. Despite his little outstanding performance, Matt Moore sealed the game, when with just over four minutes of the third period, he went to an open Tyreek Hill , which with his already known speed, had no problem scoring the six points.

Already defined the game, it was only a matter of waiting for the clock to reach zero to conclude in a dominant victory for the Chiefs in Empower Field . With this victory, Kansas City reaches a 5-2 record, maintaining its 1st place in the AFC West . Denver is last, with a 2-5 to his credit.

Why did the Chiefs win?

The fall of Mahomes seemed the end of the team, but the defense raised its level to the point where Denver did not score in the remainder of the game, and these did, with a fumble won by Reggie Garland , with its corresponding touchdown.

They kept the Broncos in 205 yards in total, with nine sacks that had a huge weight in the outcome of the game. Matt Moore did not face a great challenge, which made things very easy for him.

Why did the Broncos lose?

A disastrous offensive. More was expected from this team after their first advance, when they advanced 75 yards systematically to get ahead on the scoreboard. Joe Flacco had a game to forget, being the victim of nine sacks and averaging 3.1 yards per pass. The ground game also did not collaborate, with a bad game on the part of the runners. The result reflected the poor attempts of the locals.

Mahomes' injury is the greatest story of all this. It took several minutes to get up, and it showed the great pain he was carrying. However, the Chiefs proved to be at the height of the absence of their reigning MVP, with great victory by his side. Deputy Moore has a great task ahead, which is to keep the powerful Chiefs in the fight for the locality in the Playoffs .

The Green Bay Packers and the Minnesota Vikings are next on the calendar. We will have to wait for the young QB to adapt to his new role.

Despite his mediocre game, Matt Moore managed to intertwine his pass with Tyreek Hill perfectly. 57 yards, a 27-6 lead and a touchdown that sentenced the game for the Chiefs.