Impressed by 2019. Week 7
Overreaction is too hasty and emotional response to any event. Quite often not objective. Sometimes not true. 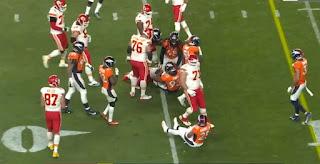 Surely, if you check the number of calls in 911 in Kansas City during the match, it increased. Chiefs fans almost hid "in the house", but soon exhaled. It is unclear how Matt Moore will deal with the Packers and the Vikings, but suddenly the defense of the Chiefs resurrects ...

This team is so hopeless that even words can not be picked up. Joe Flacco + this on-line is as incompatible as Jack Sparrow commenting on the Super Bowl with the participation of the Patriots.

Nick Bosa Monster. Front 7 is great. The rest, in such mud, was difficult to consider, and not really necessary. 6-0, we go further.

Such weather was a real chance for the Redskins, but even it did not help. Opponent risked more on the pass, and “Washington” chose a more conservative tactic, and did not overdo it.

The detachment did not notice the loss of a fighter. This is exactly what can be said about Chase Edmonds' performance. With such a runnback game and the defenses against him, Kyler Murray did not even have to bother, which he did. And Chandler Jones had a lot of fun, and won for Kyler this battle of the first-mates.

And this is your worthy line of attack before the season? Solder again makes us recall the “effect of leaving NI,” and Remmers evokes a sense of deja vu according to Flowers. Daniel Jones must thank fate that he left alive from this hell. But it was just Arizona ...


And it seemed that the Auckland would be able to fight. But the fumble touchback from Derek Carr seemed to break the team, and there the opponent started firing from all the trunks. Darren Waller is impressive. Anyway, you catch yourself thinking that behind this team, just a little more, it will become interesting to watch. Probably next year.

Vintage, MVPshny Rogers. 5 touchdowns with guys who have a total of fewer yards at a reception in total than Aaron takes away yards. Is it time for the Packers to turn their attention to the exchange market? And then against the "Chiefs" without a quarterback, they will come out without receivers.

This is called "change rails." The main thing on time. Such “Vikings”, which have both a pass and a take-out, are to the liking of almost all football fans. In situations where Cousins ​​plays a play action, he is in no way inferior to Russell Wilson. Chic game.

Surely, being a fan of Detroit is very difficult. The team is constantly ready for something more, but as if walking on its knees, while everything is normal, with its feet. The attack is trying to create, Marvin Jones - the damn son of a bitch. But the Lyons defense, which we were ready to praise at the start, stopped playing.


It is not surprising that Texans exchanged a cornerback for themselves. Against the Colts, their defense against the takeaway dragged the team, while the second hand buried it. Well, Deshons Watson began to throw stupid interceptions, and this can hardly please fans. But I would still call this defeat “coaching” ...

... because Frank Reich, at the moment, is one of the best major leagues. The way he gets out of all problem situations (and this is not only the departure of Luck) is simply amazing. After the Pagan Era, it's just like a breath of fresh air. And in this match, we saw one of the two best touchdowns of the year. Thank you Eric Ibron.

“Crooked legs and rare teeth?” Well, she’s at least smart. ” Will the epithet fit the current Jaguars? 11 violations, 45% of accurate passes, but 216 yards away and two crucial turnovers at crucial moments. All of us, all the same, are waiting for the return of Nick Fowles.

The main question is under what peak will the Bengals choose a quarterback? I asked all other questions to this team for 6 weeks already.

I have not seen such a high-quality, well-thought-out and talentedly executed game to defeat. Onside kick, returned to the touchdown - it's just a cherry on the cake. Miami is my bow. Fitz - waiting for you at the cinema.

I want to praise Josh Allen, but as he was just an average quarterback, he still remains. I would think about the future of Brian Dabol as a team - in an improper attack, Allen's not-so-bright talent may never flare up, as many young guys had.

It was easy, even for the Rams attack line. Perhaps they even saw themselves in the reflection of the Atlanta line of attack that evening. A crooked mirror is sometimes useful. The Rams had no chance of losing here.


Instead of all the words

I did not find a picture of the dead battery. Although, it does not seem to be any different from working. So the “Chargers” seemingly do not differ from those who reached the playoffs a year ago, but internally ... Yes, injuries are in defense. But why is this team so hard to score?


This week, Ryan has a Tampa with an almost empty downfield, and he has a chance to build confidence. I would very much like the "titans" to be resurrected.


It's funny, but not perfectly epic, that the first interception of Wilson of the season was made by Marcus Peters, immediately after his exchange. The Ravens defense did a great job. In conjunction with Lamar, who cares about running away, Jackson, this team is moving step by step towards the playoffs.

It is unlikely that the Metcalf fumble decided the result. “Seahawks” this evening really looked worse than the opponent. They knew exactly what they had to prepare for, but they did their homework poorly, but Wilson did not drag it. Imagine it happens.

And again - impressive! Without Breeze and Camara Saints make out a good defense. Teddy is ideally doing what he should - not wrong. Murray is beautiful, Thomas is beautiful, the gameplay is beautiful. Five points!

Did Matt Nagy run out of ideas? Or are the “tools” loose? Trubiski before the "garbage time" when the Bears made two touchdowns in a row, the statistics were - 20/34 and 119 yards. And 17 yards from the entire Chicago takeaway. How to win with this?

The Eagles simply declassified and showed them their current location. Second, maximum. What exactly is wrong in “Philadelphia” and how it is connected with Wentz - we will find out during this season. However, the problem of the wretched second-hand is still visible.

Duck will earn every million on his contract. Moreover, if he plays exactly under the ideas of Moore, and not Garrett. The Cowboys said they were not going to change anything during the season, but a rearrangement on its outcome would be natural. Especially if Jerry Jones uncovers his multi-million dollar wallet.

Is there anything worth writing here again? The Pats, from week to week, win all their games like a carbon copy. Param-pam-pam and blah blah blah - with such protection - see you in the finale.

Belichik's smile on the brow during the match earned a higher consumer rating than Sam Darnold. It was just awful. All fears have returned. And the Jets are the same.
Not the best but still good.