This Browns team looks like they'd lose to the Dolphins


Lets face the facts, the browns aren’t a good team, everybody hyped them up because they beat up bad teams down the stretch last year and baker beat up bottom tier defense and the whole NFL went nuts over them, in reality this team got overhyped and were never that good. 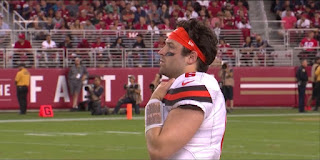 For weeks it's been the same issues. Play-calling/Coaching, the O-Line, and Baker Mayfield. I will give Baker the benefit of the doubt because the O-Line and Kitchens are failing him. Kitchens needs to go and this line needs reconstructed.
Freddie kitchens not adjusting the offense to neutralize the Niners pass rush was beyond dumb can’t get nothing going if you keep putting your qb in 5 step drop aces and leaving Bosa one on one. Freddie Kitchens is in way over his head. 5 games and he already has that look Ty Lue always had. Overwhelmed, incapable, and unhappy.

So wait. This is the Browns team that all of the NFL, ESPN & NFL analysts said were going to the Superbowl? A Superpower team. A 14-2/12-4 team. Very talented team. Browns will be Browns. Almost everyone on ESPN just say hot takes. It’s why CFB championship with the coaches broadcast is way better. Broadcast team hated Witten though. During their CFB broadcast Booger and Tessitore would eye each other any time Witten said something. The tension cracked me up.

Honestly this game has left me shell shocked... wasnt expecting a total shitshow like this. Failure in literally every aspect of the game except our kicker and punter. Yet another game where OBJ either cant get open or Baker cant find him (2 catches 27yds).If you look back to when baker was successful last year it was when he had elite level line play, some of that was offensive scheme, which they are lacking this year, some was playing to bakers strength. They have to find that balance again.

Mayfield and the Browns about to be 2-3, same as the Giants. He need to stop worrying about making fun of Eli, Daniel Jones, and talking trash to Rex Ryan. Worry about your own game?  You have tons of weapons and ant do anything with them, As Rex Ryan contemplates all of the naysayers regarding his, “Baker Mayfield is overrated” comment, this is how he feels inside...

The 49ers win 31-3 in their 49th MNF game, the most successful team in MNF history.
4-0 and for real.Bills are 21st in the league in pass yards per game. Pats won that game by only 6. 49ers are 19th in passing and are 2nd in rushing compared to 6th for Buffalo.One undefeated team nobody is surprised about in the Patriots, and another that's generating a ton of buzz out west in the 49ers

49ers are undefeated after Week 5. Last remaining team in the NFC and 1 of 2 in the NFL along with the Patriots. Are the Niners the real deal?. As long as the 49ers continue to do the fundamentals well (protect the QB, pressure the QB, and run the ball) they'll be a legitimate contender. This 4-0 team is not a mirage. They're a very good football team. And a team that the RotoBros said would double 2018's win total. The 49ers are legit... right? But seriously great job to go 4-0. Don’t know if they’ve necessarily faced a “good” team but they’ve taken care of business. First true test comes this weekend against the Rams. They win that and they should be favorites with the Pack and Saints. 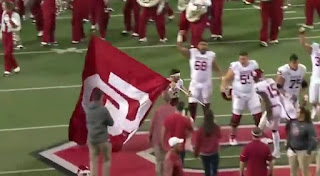 Nick Bosa is so good that it officially makes up for last year's dumpster fire.  Fans loved him predraft, GM loved him, coach loved him.  I think there was some sportswriter that didn't.  Nick Bosa went full flag after is big game for the 49ers against Baker Mayfield tonight.  many people have been talking about Dee Ford but he has been very impressive so far this years lot of Twitter Reacts to Nick Bosa Mocking Baker Mayfield Planting the Flag at tOSU; 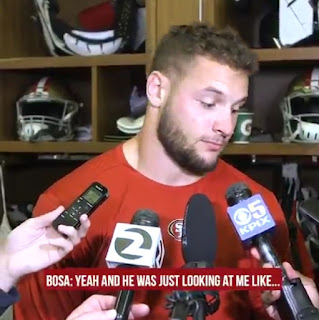