US League : who is more popular?

we decided to collect information about the major leagues in the United States to once again make sure of their popularity.

Last year, we argued about the popularity of the American leagues. It seems to everyone it is clear that the most popular league in the USA is the NFL, well, in any case, someone, somewhere, once read about it or even just heard about it. But baseball fans defended the popularity of their sport. Basketball fans talk about the continued and impressive growth in the popularity and capitalization of the NBA. Hockey fans are sure that nothing better than their favorite sport exists, and all these fat American rugby players and Latinos with bats are simply a misunderstanding.

It was decided - enough guesses from us, it was time to study this issue (at least based on the results of the last several seasons) and put an end to it, or ellipsis: after all, everything could change in the near future. In general, we decided to consider the four largest sports leagues in North America in terms of several categories that directly affect the popularity of sports. Here we will talk about four pillars on which professional American sports stand: the NFL, NBA, NHL and Major League Baseball. One could, of course, add MLS here, but in most indicators this league is inferior to the first four quite seriously. So, if European football is somewhere nearby in one of the categories, then we will give its numbers.

Here we will appeal with data from five reputable sources, which, it seems, can be very trusted. ESPN, Forbes, The Ranker, The Daily News and Wikipedia have long earned a high level of citation, trust and the highest degree of reliability of published information. Well, I already hear the discontented hum of Wikipedia critics, where, as is believed, anything can be published. Firstly, this is only partly true, and secondly, in this case, a well-known resource becomes only an aggregator of most of the information that is published on other resources, including those that we announced in this article. In addition, in this article we will cite data from News Gallup, one of the most respected sites that provide data from public opinion polls, and base their figures on the figures of the well-known Harris Poll agency.

To clarify, we will only talk about the United States of America. The popularity of hockey in Canada relative to other leagues will not be considered here.

Sports are very popular in the USA. It is impossible to compare the capitalization of the American leagues with anything else that is in sports. If you evaluate the value of teams of American leagues with European or Asian sports - the difference will be impressive. Based on the value of the teams and their property, the capitalization of American teams is more than $ 70 billion. The list of 10 most expensive sports teams in the world immediately 7 clubs from the United States. According to Forbes, the first place in 2018 is occupied by the NFL team Dallas Cowboys, whose cost is estimated at almost 5 billion dollars. 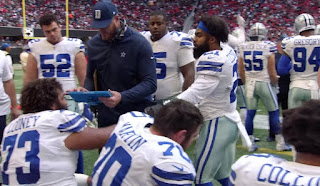 The overall sports market of the four major leagues in the United States exceeds 50 percent of the markets in Europe, the Middle East and Africa combined!

All 4 major leagues receive huge financial injections from the home market, which is the basis of their success. It is worth noting that the National Football League almost does not rely on the sale of products or television rights abroad. There, the NFL is less popular among all four whales. Nevertheless, the league almost does not feel the absence of large sales outside the United States, the country's domestic market is so huge.

It is worth noting that in the USA, student sports are incredibly developed, which often appears in surveys of both the most popular sports and the highest television ratings.

In addition to the four main leagues and MLS, which we have already written about and will definitely say, polls of the most popular sport or league annually feature tennis, golf, boxing, and, of course, NASCAR (North American circuit racing). The ratings and popularity of mixed martial arts are growing every year. Some UFC events are already competing with the top boxing fights, and sometimes have a higher rating. In this regard, the absolutely outstanding result was shown by the UFC 229 event, where Khabib Nurmagomedov and Conor McGregor met in the decisive match. The UFC sold approximately 2.4 million paid broadcasts (the cost of one broadcast is more than $ 60).

According to a survey conducted by Harris Pole at the end of last year, American football was named the favorite sport by 37 percent of Americans. This is the best result among all team sports with a big margin. To make it more convenient for you to navigate the survey figures, we will give it below in the column. Here, interestingly, an unexpected and rather interesting participant appears. However, this is still the same participant that we had previously in relation to the MLS league. It just so happened that European football in the United States is called no other than Sokker. Let us use this term in this article.

It is interesting that in addition to surveys of sociological agencies in the USA, there are official statistics of people who are constantly involved in sports - they are engaged in it. In this category, the winner of the popularity survey - American Football - is seriously inferior to the leaders. Probable reasons: less accessibility, high cost of ammunition, complexity - officially 8.9 million people are involved in American football. The undoubted leaders here are basketball and baseball.

It is also interesting that high-school sports are represented in almost all states (regarding the five sports listed). A minor exception is baseball, which is not played in two states (even interesting in which). But hockey is a serious exception. At the high school level, it is developed only in 15 US states.

Television rules the world of sports. Ask the English Premier League about it. Or you can ask the same questions to advertisers during the Super Bowl. According to official statistics, in 2016, only in the USA, the match for the Super Bowl gathered 112 million people at the screens. Given the interest of the audience, the cost of a second of advertising time is constantly growing. According to rumors, a 30-second commercial this year cost advertisers $ 5 million, that is, every second of it costs $ 166.6 thousand (in 2012 this figure was at $ 117 thousand).

Everyone begins to prepare for the Super Bowl in advance: companies are shooting unusual commercials, and Hollywood movie studios are installing premiere trailers for the expected blockbusters. Moreover, given the tendency to increase the cost of airtime, most advertisers are now not trying to conquer viewers with long videos that last more than 1.5 minutes: short and dynamic 30-second “spots” are now in fashion. The budgets allocated for the purchase of advertising during breaks of the game for the Super Bowl are comparable to the budgets of some films. For example, if one of the Hollywood messengers would decide to show two two-minute trailers, then this year it would cost him $ 40 million, while the budget for the Green Book film, which won many awards and an Oscar for the best film of the year, is only $ 23 million.

And all this thanks to a huge audience and crazy TV ratings.

The Super Bowl generally flies into space regarding ratings, not only sporting events, but also any television shows. Among the 10 most popular TV shows in history, Super Bowl broadcasts take 9 places. And only the final episode of the 1983 MES television series squeezed into a tight series of major NFL matches. He takes ninth place.

And here is a list of the most popular sports TV broadcasts since 2010 by sports.

True, it is worth canceling a few points. The NBA finals are higher than the Stanley Cup finals, and yet hockey wins the competition when it comes to the Vancouver Olympics finals, which took place in prime time. World Series ratings were incredibly high precisely in 2016, when the Chicago Cubs became Major League Baseball champions for the first time in a hundred years. Since then, the World Series rating has not even been close to the numbers given on this list.

Finally, television contracts are critical to the success of the North American leagues. Here again there are no equal NFL. In the following list, we present the total cost of the contract and the numbers that Broadcasters pay leagues annually.

NHL - 2 billion (200 million annually)
We note that the NHL loses in the component of the cost of rights under a television contract to the regular championships of the three largest student football divisions, each of which has a separate contract with Broadcast.

We have reached the point that allows baseball fans to still talk about the greater popularity of their sport. Ticket sales and attendance have a huge impact on the popularity of the sport, rather, even are its litmus test. Next will be a summary of the statistics of attendance of the North American leagues for the full season. And there is no equal to Major League Baseball.

But for the sake of justice, it is worth saying that the NFL season is much shorter. One NFL team holds 16 games in the regular season, and the Major League Baseball team - 162. The average cost of prices for NFL matches is much higher than prices for games of any other league. Therefore, it is worth bringing one more statistic - average attendance.

One could still cite many figures - from the cost of teams to the growth or decline in the popularity of leagues. But, it seems, and this is quite enough to draw certain conclusions regarding the popularity of the North American leagues.

Historically, the two most popular sports in the United States were American football and baseball. The average American will visit a lot more baseball games in his life, but the cost of tickets, the limited season, television ratings and polls are in favor of football. In any case, the American team sports market continues to grow. This applies to all leagues. This means that each sport has its own advantages and its own lawyers. This material was created only with the aim of demonstrating a cut of American interest in sports and, possibly, encouraging some fans of traditional sports in our country to respect the sports business that other leagues do. If we at least partially succeeded, our task is completed.