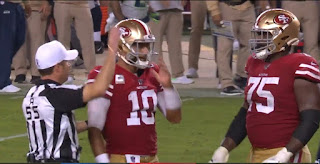 And who will be after Raiders? The line of attack and the game of Philip himself left the team no chance. An opponent’s defense and playcalling, as well as an external game, were what kept the “Chargers ” afloat and ensured such a small gap in the long run. It was bad and, based on the schedule, it is clear how the “Chargers” do not get into the playoffs and they will have a difficult decision in the offseason.

And who chose whom? Clelin Ferrell - 4th peak, Max Crosby - 106th peak. I don’t even know how to judge Mayok or Gruden now? Which of them to criticize for the first choice, or to extol for the fifth? Crosby almost lived in the Chargers backfield and, more importantly, ended up there at the right and important times. Derek Carr suffered from overly conservative playcalling, but at least he didn't lose the ball. And Josh Jacobs, already familiar, came to the rescue.

And who would know about the injury? Lions may suffer not only from Stafford's absence on the field, but also because of the strange silence about the state of his quarterback all week. His switch was given 46 passes - in Detroit, they again remembered the nightmare of the game without removal.

And who believed Mitch? Well they say - “I'm back, mazafaka! Detroit beat! Already 20 points! ... What? Did someone play with them? ”I hope the team’s front office didn’t.

And who will pass? No, well, seriously - when will there be a normal passing quarterback in Buffalo? Indeed, if you judge so - even the great Joe Kelly often threw more intercepts than tadchunov. What can we say about Allen, let there be progress in his game in comparison with last season. Sad is the attack. This is not Baltimore.

And who didn’t make any losses here? Is it possible that Baker is “tucked away” by Mayfield? I must say that the Browns looked much better than we expected and their duo rannbekov can still surprise us.

And who will fire Spagnuolo? And who decided to invite him at all? A failed game plan in defense. Plus, Andy Reid picked up and ruined the ending. Plus special teams screwed up. Well, yes, here’s direct “the main contender for the Security Council” ...

And who would have thought? Ryan Tennehil, himself, won the third match of four! Where did Vrebel and the coaches look at the beginning of the season? Really Mariota looked better in training than the former "dolphin"? Two future matches with Texans will be a sight for sore eyes, but the decision at the beginning of the season may affect the prospects.

And who said about Wilson's profit center? Lamar thought, and realized the coolest remote touchdown from the quarterback of recent years. And for the second time this season, the ideal quarterback rating was earned. Reed opshn died, they said.

And who could make a worthy debut here? Obviously not against this defense and clearly not with such a selection of players. Whatever conclusions the Bengals chefs have made about Finley, they are unlikely to be complete even at the end of the season.

Does anyone even train this line of attack? It seemed impossible to achieve such degradation in one season, but the Giants did. Have you ever thought that Barkley could score 1 yard in 13 attempts ?! This season, their attack is one bright spot - a guy from the 5th round, Darius Slayton.

And who are you, Sam? Consumer or pizza delivery man? And how many years, and new head coaches, should we wait for an answer to this question? I hope not so much how many millions they “donated” to Leveon Bell. I can’t call it a salary.

And who replaced you all? 6 sacks per match from a team that previously had 7? !! 143 yards away from those who had just run 100 before this ?! What the hell is going on? Is it really that Dan Quinn stopped appointing rallies in defense?

And who is responsible for this? We talked about excellent defense, the line of attack, and all this is at home against team 1-7 and one of the worst defenses ... How? Why? Only questions remained in the void.

And who invented this? This fake pant can be watched forever! It’s a pity that only Kyler, who played the whole match like a pro, in the end threw this rookie horror. Well, but Christian Kirk oh how pleased.

And who knows Jamis Winston's student chants? And she’s like this - “Who didn’t throw the interception, consider that you didn’t play in the match!” Jamies, didn’t Jimmy Garoppolo study with you there? “Tampa” won rather in spite of, although against the removal they are still incredible.

And who doesn’t want the first peak here? So this is Miami! Dolphins has so many young people in defense that, in fact, they do not care what choice the team will have. So they played.

And who is this crap here once again as a starting quarterback? So this is Brian Hoyer! Well that's the truth - it would be better if Chad Kelly came out. The guy still has not a single pass in the NFL.

And who else remembers Cam? And although Kyle Allen is still not the leader, but not the faceless quarterback, as there are many. This time it didn’t work, but hardly anyone was waiting for the whole season without errors and recession.

And who broke the Packers? Moreover, they "broke" correctly. "Green Bay" plays from defense and removal. And Rogers perfectly complements this. Straight democracy after tyranny.

And who can win without the implementation of third downs? Yes, and constantly losing the ball. Obviously not the current "Rams" and Goff. For the team, not everything is lost, but, unfortunately for them, there are too many strong defenses in the opponents.

And who said that the defense can not get to the playoffs? The Bills recently succeeded. Well, the Stillers, if they continue like this, may well be there. Minka Fitzpatrick, from the time of the Pittsburgh exchange, has done as much as the entire Dolphins defense

And who scolded the vikings line? Probably their best game of the season. Against a really serious defense. In this perspective, Cousins ​​and Cook look like a couple that can make some noise in the playoffs.

And who is Jerry Jones after all these years? How does he continue to endure this mediocrity on the edge? Duck throws 6 out of 7 on the final drive, the takeaway is closed the whole game, but Garrett chooses Elliot twice as an option for a set of 2 yards. It seems to me asses have undermined not only in Dallas. 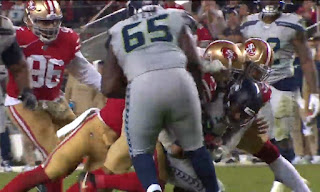 And who, if not him? Russell Wilson does not miss twice. And let him not beat the decisive blow, and did not even pass at the decisive moment - his mind does not miss. He shouts “run” - so you have to run! And you know what’s funny - Texans paid Clowny 7 million this year to be top at Seahawks. P - planning!

Did anybody survive there? Not to say that the injuries were worth the “49ers” match, but the absence of Kittle, and then Sanders (not to mention the other 5 players who went into the locker room during the match) bled SF and especially their attack. Well, returning Staley and McGlinchey played so that it would be better not to return. Protection can not drag so much, but this one almost succeeded.
Not the best but still good.