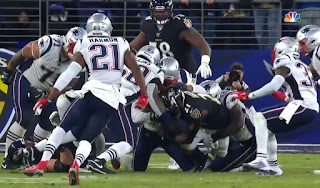 For many, the past Ravens vs. Patriots game has become a sensation. The outcome of this match was decided not by the confrontation of Tom Brady and Lamar Jackson, but the confrontation of Bill Belichik and John Harbaugh. These guys know each other well, have met more than once, including in the playoffs. In Sunday's game, John Harbaugh and his headquarters showed that the Patriots defenses are not so strong. New England has an excellent line of second hand and that is why they must be hit on the ground. The Baltimore attack is the best fit for this.

John Harbaugh had to solve two problems - how to successfully pass the ball and, since you still have to pass, how to beat the maine-to-toe men defending the Patriots.

Let's start with the removal. Ravens was carried 41 (!!!) times per game, with 23 pass attempts, 16 of which were caught. Ravens scored 210 yards on the ground and brought three touchdowns. This is a lot.

To begin with, the Patriots defense was really preparing to stop the power take-off centered on Ravens. One of the internal linebackers constantly attacked passage A before snap. This technique made it possible to avoid a double block on the knockback and leave it face to face with the center, since the guard must respond to such a threat and block the linebacker. Everything happens a second before the snap and this technique leaves no chance for the quarterback or linear attacks to adjust their blocks.

Patriots attacked the passage In the meantime, it worked. And generally successful.

For comparison, let’s see how the central takeaway works if the linebacker does not attack passage A, and the know-tackle receives a double block and the guard goes to the second level. Good lead block from the title end of Nick Boyle (No. 86) and we get big play on the ground. 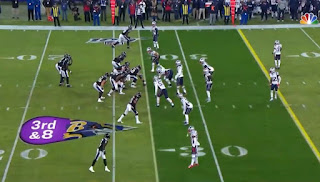 There are three things worth noting in this draw.

The first is the work of the tight end Hayden Hurst (No. 81). You might think that he doesn’t block anyone by mistake, but in fact this is a read-op, where Lamar Jackson read linebacker Jamie Collins (No. 58). If he aggressively goes to the center to play against ranninbek, then the quarterback leaves the ball in his possession, ahead of him an open field and a blocker in the person of Hirst.

The second is the staff of both teams. Ravens has three tight ends and a runninback in boxing, the Patriots have five (!!!) linebackers on the field, nine defenders in boxing. And this is in the era of the development of pass football. It seems to me that I have not seen such an accumulation of mass around the ball before the snap for about ten years. Unique situation.

The third is Nick Boyle's tight end work (No. 86). At some point, it may seem that the takeaway will be stopped on the scrimmage line, as the line defense and linebacker are ready to do the tackle.

But the tight end makes an excellent block of internal linebacker Dont'a Hightower (No. 54), and the line defense simply did not manage to orientate. All this is underlined by the fact that there are no trifles in football, even in such simple remote rallies.

When linear attacks do not reach the second level, this allows linebackers to remain free and calmly read the takeaway and make tackle.

Football is a micro-tuning game for an opponent. The winner is the coach who makes the right adjustments on time. And Ravens knew very well what to do and when to do.

The weak side of the aggressive game of internal linebackers is the protection of flat zones from both pass and removal. In such a situation, playing an edge player with an ordinary read-action game is nowhere easier. Since the domestic linebacker went into boxing, there is nowhere to wait for help.

When the quarterback makes it himself, without any read-opshn, this creates a great advantage blocking at all three levels. The internal linebacker who attacked the passage is simply not able to stop the quarterback from the other side of the box. Just imagine that the internal linebacker did not go to the blitz. In all of these draws, the earned yards can be divided into two. The position of one player on the field significantly changes the balance of power.

Another weak point of protection for Patriots is the principle of reading two passes for linear protection. Belichik is very fond of 3-4, he won three Super Bowls with his best defense, playing 3-4. From year to year, I see how Belichik is trying to build all the same defense, which works perfectly against the removal of the first downs. But last Sunday, the guys did not manage - the linear defense simply does not have the talent to play the reading technique of two passes.

But, no matter how successfully you endure, sooner or later you must pass. Patriots play a lot of man-to-man. Mismatch for defense is a linebacker against ranninbek. Ravens also make life difficult for defending with dashes and play-action. As a result, the linebacker simply does not keep pace with the earlyback through traffic.

The Ravens were ready for a tight man-to-man cover, and the Patriots were beaten with this standard tricks - dashes and tight constructions. In such situations, someone from the defense is mistaken and begins to do their job, as with Boyle’s touchdown, or the defender may simply not be in time for his player through the traffic. Ravens sold five out of ten third downs. A worthy indicator.

Ravens are well prepared for this match, and the Patriots defenses have weaknesses and defeat them to their advantage - ahead of them, they have a strong calendar. Perhaps this game was a rehearsal of a playoff meeting, where both teams are highly likely to meet again, but the stakes will be higher. The most interesting football is ahead.

Whoever says that about incredibly effective pass-through football, the truth remains simple - football begins with a takeaway. If you want to win, then you need to stop the removal of the opponent and successfully make the ball yourself. There is one undefeated team in the NFL - see their statistics on takeaways. In modern football, defenses are greatly “relieved” due to the sharp development of the pass game. And for the removal this opens up new possibilities. No one will refuse to take out if it is as effective as a pass. We are witnessing a new round of football.
Not the best but still good.