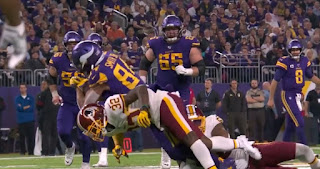 Grayness. Even the burgundy turned gray. This team needs a shake. Need a new head coach. You need a confident, at least in yourself, quarterback. We need an understanding of our future and our players who want or do not want to play here. Are there too many necessities for one year?

Perfect performance with low power consumption and clear instructions. It is this impression that the Vikings made here. Their last drive, which consisted of 16 (!!!) remote rallies in a row and “killed” 8 minutes 16 seconds, can be entered into time management textbooks.

Kliff Kingsbury has two arguing personalities inside. One wants to play creatively, and the other is an evil conservative. In this match, the second came to the fore. The attack of the Cardinals looked dismantled and uncertain. And the defense was eaten by Michael Thomas and Latavius ​​Murray. And then the "Cards" are waiting for two games with the "49ers" ...

The Saints played so impressively in the first half that I wanted to crawl through the screen and yell at them. They did not shake much further, but the pace of the game was crumpled. From the applicant for the Security Council, we would like to see more returns in each match. I think Drew Brees and their attack should get better after the break.

The team is all bad when your quarterback is Joe Flacco, but worse when Joe looks the most adequate at the post-match press conference. Or maybe Joe just did not say that the team began to merge the season ?! But didn’t they tell Vaughn Miller that he had suddenly grown old?

Whatever you say, the Colts are legitimate candidates for missing the first round. Right now, they are in the top 3 teams of the conference. Separately, it is worth praising Jacobi, who had a slurred match, but at the right moment broke free from the clutches of a pensioner and made a great throw, while Vinatieri has not steel eggs, but adamant ones or from vibranium.

You can blame the judges for premature whistles as much as you like, but if your team does not have a quarterback or a running one, nothing will help her. Jamies made the most ridiculous throws in the best traditions of stupid comedies and tried to get into the opponents' defenders throughout the game. Several times even hit.

We are waiting for a note with Dolphins. I think it will be a boxing match from the movie "Sergeant Bilko."

Rams, we have two news for you. One is good and one is bad. First, you won. Second, you beat the Bengals. And that’s why this is bad news: the Bengals looked the whole game no worse. In general, we will see, but for the time being we can’t talk about bright prospects.

Darnold began for health, and finished - as usual. It’s interesting when the management of the team guesses that they have a toxicomaniac coach and his previous team is now draining the season to swim from where the Jags came from.

And they swam out, even in the course of this meeting, swam out. Of course, I don’t know what the coach will do with the fact that Fowles is about to be ready, but it seems that Furnett started to play because of his mustachioed quarterback, and not for another reason.

Well, that’s it. It remains to repair the defense and the “Giants” will return to the playoffs. Too bad not this year. It would be great to see the tears of the Pats fans when their team finished the second perfect season by losing to the Giants in SB. And yes, who is Slayton?

“Detroit” did what they had to do, however, the problem is that this rule works for them somehow selectively and they swing on a rocker from “good football” to “no football”. It’s time for the Pencil to lubricate the mechanism and spin the sun towards stability.

Lucky, what else can I say. In principle, the game of this team and the victory on Sunday is clearly indicated by the fact that after the victory they fired the attack coordinator. Damn, did anyone like Wiesenhant at all? That the "Titans" suffered from impotence, that the "Batteries". The second just has Rivers, who brightened up this sump.

In general, the meme is funny, but the situation is terrible. The team that was supposed to fight this year for reaching the final of the conference is struggling with the crooked legs of people who need to get between two iron sticks. We have a solution to this problem: somewhere on the beaches of LA one Scandinavian god misses Zlatan. Can you imagine what the hype will be like ... ... before the first field goal attempt.

The Eagles exceeded expectations. They were excellent against the cool defense of the Bills and were able to finally show a distinct game in the attack. It remains only to understand whether this phenomenon is constant or periodic.

It is unclear what happened to the Bills this week. Allen was not bad, but the takeaway did not go. Protection missed everything. Not good guys. Well, how could you miss out 218 yards so much? Nowhere good! Well, we got up and put ourselves in order, wiped off the grease, drooling and snot and getting ready for the next game.

During the game, it seemed that Wilson simply did not come to Atlanta and his clone, who could not play, was running around the field. Fortunately, Seattle’s takeaway works like in the good old ones and the defense plays at a decent level, although who played against them ...

... .the team that managed to turn from a member of the Security Council into the worst team of the NFC South division in several seasons, and there is Tampa in this division! Generally looking at their game is boring and painful eyes. Thank God that the owner does not plan to fire the head coach! 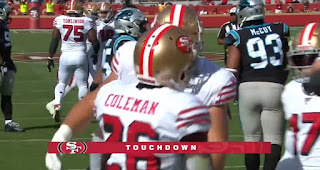 It seemed that Kyle Allen had already entered the field to lose. Even the fans of 49ers did not wait for such a total transformation of the quarterback into a “pumpkin”. Well, on the other hand, Ron Rivera has legitimate reasons to release Cam Newton after the buy-in if he is already healthy and no one will say anything against him.

Well, there are no words other than "brilliant." And in relation to the performance of the entire Niners defense and Nick Bosa in particular, and in relation to all these masterpieces in the attack from Kyle Shenahan. Remote touchdown Dibo Samuel is just the creation of a master. The main challenges for the team are yet to come, but so far it really looks like a contender.

And again, the rivals of the Patriots are stepping on the same rake. But the Browns went even further and turned it into a “streak” - three rallies, three losses. The mind is incomprehensible! And again it is not clear - how to judge them, how to analyze? One thing I see clearly - Kitcheners, at the moment, failed as a head coach.

Jamie Collins burned straight from the Browns. Some, straight, MEGA performance gave out. Although, there the whole front-7 is not amenable to any comparisons and indicators. The Pats defense of 2019 seems to be taking historical steps into the host of the best NFL defenses of all time. However, in 2008 they at least beat really worthy teams - champions and future playoffs.

It’s like Gruden and a tough coach, or it seems like that, but he doesn’t manage to establish discipline in the team. The number of violations has increased even compared to last season and now it is an average of 8-9 fouls per game. This is a lot, and many of them influence the result. The Raiders are an interesting team, but each of us feels that something is missing.


The loss of JJ Watt for the next part of the season is a pain for every football fan. Without it, the Texans defense against removal will become more vulnerable, and rivals will breathe more freely, because Watt was the NFL leader in the number of quarterback hits. But while Watson and Hopkins are on their feet, this team claims to play off to the very end.

Despite all the staffing problems of the Packers in the attack, they found an excellent tool for leveling them - Aaron Jones. Ranninback Green Bay on the way to 1,500 yards from the line of scrimage, minimum. Well, Aaron Rogers, apparently, wants to compete for the title of the MVP and he can do it. He should have been more serious about the line - it would be unacceptable to fail against the Chiefs front like that.

Decent gameplay from Andy Reid, a good game from Moore. There wasn’t quite a bit of reliability in the defense, and it’s difficult to blame, in the absence of Jones, Fuller and Clark. We look forward to the return of Patrick Mahomes, which may take place earlier than planned.

After the first quarter, one would think that the team from Miami decided to win and deprive us of a super game with the Bengals, but then the guys remembered why they came to Pittsburgh and systematically three quarters played as they should.

It seems Rudolph's shock only passed during the game. In the second quarter. Before that, he considered himself James Winston and tried to throw 5 interceptions per quarter. The Steelers defense is in perfect order and continues to generate losses from rivals, putting serious pressure even without Tewitt. And here, it seems, the takeaway also woke up. A game with the Colts next week will show the patient is still alive or it’s time to prepare for the 2020 draft.
Not the best but still good.