What is the statistics about the playing time in the preseason games?

Preseason games are a widely discussed topic. Since the 1978 season, teams almost always play four pre-season matches.
To understand how preseason games have changed over the past ten years, the league analyzed the time spent by players in the starting lineups of the first week of the regular season in these games. So, how often do starters of the first week play in each of them?

The chart below shows the percentage of possible snaps for the first week starters in each pre-season training match, as well as directly in the first week of the regular season. On average for all positions, start players receive 80-85% of snaps in regular matches. This indicator practically does not change, that is, the change in playing time does not depend on the rotation of the composition. 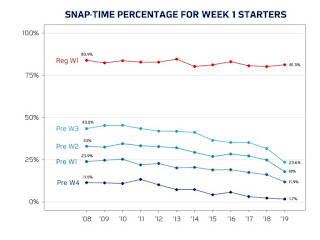 The playing time in presison matches, on the contrary, is unstable, it has been constantly decreasing and has reached a minimum over the past ten years in 2019.
A few noteworthy facts:

- only 1.7% of snaps were played by starters in the fourth week of the preseason of 2019;
Also this year there is the largest drop in the number of snaps in the presison for start players over the observed period;
- In 2019, 85 players in the starting lineups did not receive a single snap in the preseason. On average, from 2008 to 2018, this figure is 24.

To summarize - updating the historical minimum of snaps in presison is one of the reasons for the league to review the season schedule and change the number of official matches.

Material prepared according to operations.nfl.com