Football 101 : Beginners guide to know NFL Glossary terms From A to D and more about american football.

Hi everyone. It took a long time to prepare, but still completed the dictionary of American football terms. First of all, this material is designed for beginners, those who have just started to get hooked on the best game of the earth. In the future, I am ready to supplement the material if there is a demand. Constructive criticism, corrections and additions are welcome.

First of all, from where did the name ‘football’ originate?

Based on its history, it was the Greeks who had first played the football called harpaston. In the United States, it was called foot ball. A blown-up bladder was used in Virginia in the year 1609.

Football in Europe is actually soccer, the sport from which American football evolved.

Football got its name because originally the hands could not be used in the sport. Only the feet were allowed. Then rugby football came into action wherein the hands were allowed to be used. American football had been widely influenced by these sports and is now known throughout the world.

So let's go. Today the letters are AD. 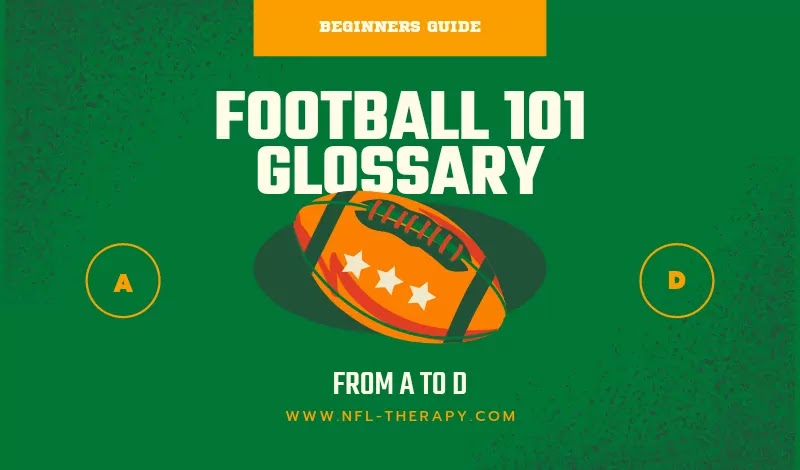 In football, players cannot choose and wear their favorite number. They have the right to wear only those numbers that correspond to their position.

TB - tailback aka RB - running back (back runner) .. Running backs are divided into: FB full back and HB half back. These players perform the same roles BUT the priorities are different. For FB it is Block-Run-Catch, for HB - Run-Catch-Block.

WR is a wide receiver, it is also a receiver.

DB - defensive backs, subdivided into: SV-cornerback S-safety: divided into FS-free safety and SS-strong safety. SS performs approximately the same functions as FS, only it can still play man-to-man cover, blitz, etc. And it is located closer to LOS than FS.

In football diagrams, as a rule, the attacking players are indicated by the O symbol, and the defense players by the V or X. 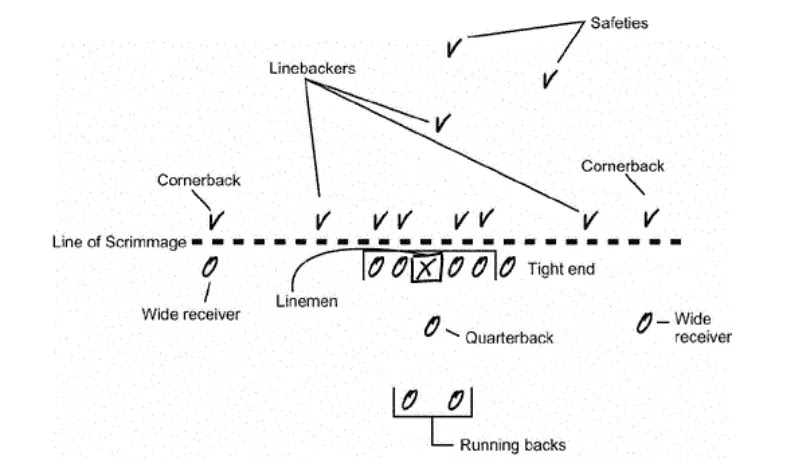 But this is not a dogma, everyone can designate as they like.

Audible  - changing tactics and / or formation already on the line of play, based on the formation of the enemy, QB uses passphrases and signals for this.

Backfield  - offensive players behind the scrimmage line. These are QB, HB and FB

Blitz  is one of the many defense combinations in which LB and / or DB take positions on the field to attack QB. Blitz task: attack and capture QB (make a sack), force him to hurriedly throw the ball (create pressure on the quarter), thereby disrupting the attack combination. In blitz, as a rule, 5 or more defenders take part, which will break through directly to QB.

Blocking - blocking - when a player impedes the movement of another player using his body. The diagrams are depicted as follows: T - run-block, as if showing what we are doing, step forward and block. An inverted T will represent pass block, step back and block. Run-blocks are subdivided into several more. For example :

Trap - block  - a block during removal, when one of the guards is removed from its place and behind the line of attack moves to the other side of the block in order to increase the number of blockers in a certain area.

Reach - block - a block when the lineman from his place cannot reach the defender directly.

Double - team –block two by one. As a rule, it is used against a strong opponent who cannot be held alone. Etc.

Bomb  - Long pass to WR which is about 35-40 yards from the scrimmage line.

Bootleg  is a combination in attack, when QB imitates the HB ball tab and at the same time the whole block goes, for example, to the left, and QB and the player who helps him, if any, to the right. This combination is also called play action. There are two outcomes: either the defense will go for a trick and, most likely, there will be a successful pass or even TD. If the defense responds correctly, the combination will most likely result in a sack. Fig. 4 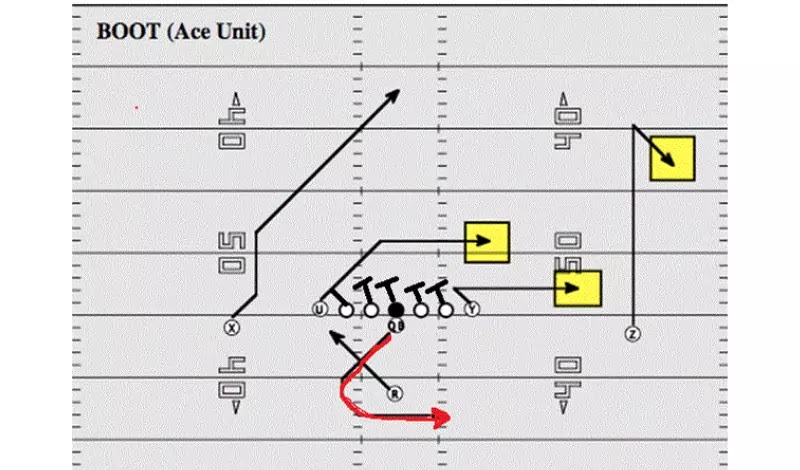 An example of a successful play action:

Box - an area on the side of the defending team, opposite the off-line, about 5 yards, including 8 defenders. This is DL LB and often SS. 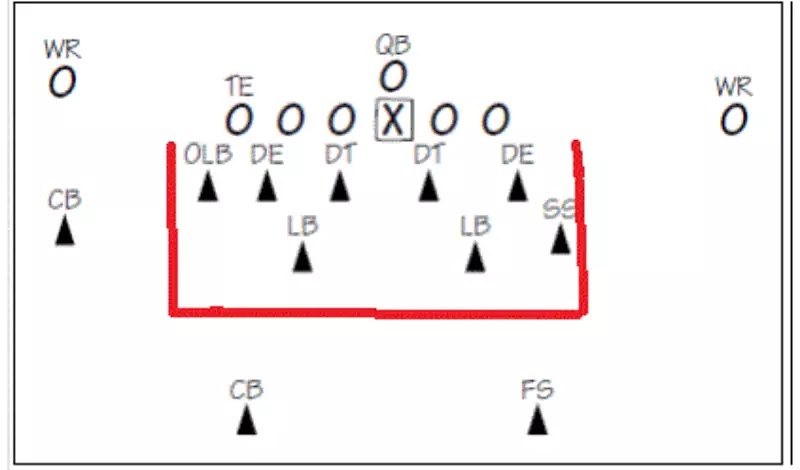 Bump and run  - the technique is performed by DB against WR in order to stop or slow down its movement. DB pushes WR the moment he starts running, and can legally block the receiver for the first 5 yards after starting.

Carry  - Carrying out the ball, moving RB with the ball across the field. In statistics, carry attempts for RB are called carries.

Center  -  C  - the attacking player who passes the ball to QB at the beginning of each combination (makes a snap).

Completion  - caught pass. The requirements for a caught pass are different for students and professionals.

Clipping is an illegal block in which the player is blocked from behind and below the waist. The penalty is 15 yards. Initially clipping was considered any block in the back, but now it is a prohibited block below the belt. Other blocks from behind are penalized with 10 yards.

Contain - task / route for defenders. With an external carry-over, one defender, LB or CB, is assigned to watch the runner in order to guess the combination in time and stop the carry-out in time. If all goes according to plan, the RB carrying the ball will be forced not to go to the outside but will turn into the middle, which gives LB a great chance to stop him.

Cornerback  - CB - Corner back-defensive player, located on a wide part of the field, usually opposite the opponent's receiver. His task is to cover corners, edges of the field, for an even distribution of protection. Cornerbacks belong to the second line of defense (defensivebacks).

Counter is a combination when the running back makes a step to one side just to get the ball from the quarterback, and after receiving the ball he runs in the opposite direction. It is done to temporarily disorient the defense and facilitate the setting of the block to the runner.

Cut (cut back) - a sharp change in movement by a running player.

Cut blocking is a blocking technique for every offensive lineman and other blockers (legal block below the belt, from the front), in an attempt to knock the defender to the ground.

Dead ball is a ball that has been out of play for a long time.

Defensive back -  DB  - defensive back, second line of defense player. The task of these players is to intercept passes and interfere with the reception of the pass. And if the pass is still accepted by the receiver, they must stop it as soon as possible.

Defensive end  - DE - defensive end, a defensive player, is located on one of the edges of the defense line. The objective is to restrain any running attacking player from his edge or stop QB from throwing the ball. In a passing combination, he breaks through to the quarterback.

Defensive line  - defensive players who are located opposite the offensive line players. The line of defense consists of ends, tackles. Objective: destroying the offensive line, plugging holes in the scrimmage line, stopping enemy players, trying to get to the quarterback.

Defensive tackle - DT - defensive tackle, defensive player. The task is to stop running opponents, preferably before or on the line of play, try to break through and tackle (see below) in the backfield, prevent the attacking players from blocking the players of the second line of defense, line backers.

Dime is the 6th DB. It is so called because dime has a value of 2 nickels (nickel is a 5 cent coin, or fifth cornerback). Used against an obviously passing combination, against 4 or more receivers.

Double foul  - a situation in which both teams break the rules on the same down.

Down - down, the period of play from the moment the ball is put into play until the moment the ball becomes dead (dead ball). The attacking team gets 4 attempts to get the ball 10 yards. If this does not happen, the ball goes to the opponent. As a rule, this happens after the pant at 4 down.

Down lineman is a line defender.

Draw - the combination represents a disguised takeaway, initially this combination looks like a pass. Linear attacks move backward, as if to protect the quarterback, who in turn also steps back and passes the ball to the runner instead of a pass. This is HB DRAW.

Drive is all the time during which the team is on the attack, moving towards the opponent's end zone. A drive is the possession of the ball from the moment of receiving the ball (kickoff, interception, fumble), until the moment when the team loses the ball (loses or gains points).