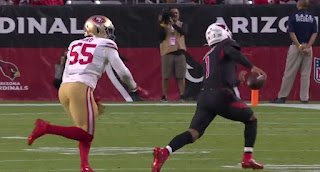 But what if 49ers are really ready to go further than we might expect? Here, the defense did not enter, but the attack and Jimmy soloed the whole game. The signing of Sanders earned another bold plus sign.

What if Kyler Murray can do more? Especially when your own trainer will stop putting sticks in the wheels, and not just attack. Timeouts and Kingsberry are the most difficult relationships this fall.

But what if DeShaun Watson deserves the profit center? He can see the touchdown with one eye, gaining 5.5 yards for an attempt to carry out, and indeed - he is a quarterback in the team of Bill Obraien. Give the guy at least milk for the harm! And when the team also has a takeaway, DeShaun is practically unstoppable. Just a week of rest and we will see their most interesting matches of the season.

What if Nick Foles played all season? Jaguars, please give us a chance to compare. Maybe it wasn't Minshew who made the team better, but the team Minshew? You have nothing to lose. Release a kraken backup.

But what if the Titans have no problem with quarterbacks at all? And is this some kind of brown infection from Ohio spreading to the south of the USA ?! Georgia and Florida, too, weren’t hooked ... It's time to evacuate people on ships, and send special forces and Brad Pitt to Cleveland in search of a null patient.

But what if the 49ers broke Kyle Allen and he became just a typical backup? And he will throw with 50% accuracy, and even interceptions? Fortunately, the Panthers are still working Chris McCaffrey, ready to drag the touchdowns to the right and left. The guy has only one game out of nine without effective action, and even that was with Cam.

But what if the Redskins think that Arizona succeeded? And staking out the top 2 pick draft will again take the quarterback. You say - nonsense? And I will say - Bruce Allen. This may not start looking for a coach in the offseason.

What if a year ago the Bills chose Lamar? Well, after all, they now have the whole attack breathing directly with these carry fluids. Why did Allen buy them then? Hand gun? Is this the one that now hangs on the wall and shoots once a year? 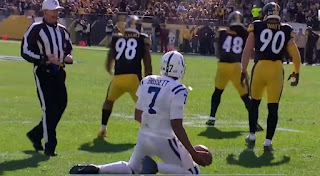 But what if Jacobi Brissett misses a few weeks? “Not Hoyer!” A groan comes from the west coast. “Not Hoyer!” Comes from Massachusetts. “Put it, put it, it's cool!” - a sly whisper from Ohio is heard. But Houston doesn’t give a damn, especially until the Colts players watch Ace Ventura.

What if the Steelers make it to the playoffs? How appropriate, in this case, is a collective letter demanding to be pulled along the street, for example, by Freddie Kitchens or Anthony Lynn, tied to a donkey cart. Well, or with a request for an indicative flogging of half of AFC coaches for the public shame of the conference? I am not saying that the Pittsburgh is not worthy - their protection is magnificent and clearly underestimated. But seriously - will you let Mason Rudolph into the playoffs?

But what if Mitch Trubisky is Blake Bortles, and that guy at Rams is Mitch? Where is the Scooby-Doo team there to take off their masks? Chicago defense was on the field for 40 minutes. Pseudo Mitch managed to watch two new episodes of "It's Always Sunny in Philadelphia."

And what if they left you know who? Interestingly, the question about Wentz and Fawles will be as eternal as about the chicken and the egg, or will it appear only after the defeat of the Eagles? Let's live the present. Release Nick from your hearts already.

But what if Adam Hayes planted the whole team on his dope? How else can you lose the Dolphins? Sam watched half of the match on the tablet at Chich and Chong and dreamed of a big burger and his own drum kit, and hays had Bob Marley in his headphones. The romance of the green team! #fireGease

But what if the Dolphins themselves ruined everything? Or even worse - they really didn’t tank, but just played before that ?! No ... it seemed. I think they just did not bother to warn the Jets, and they just are not interested in football.

But what if Kirk Cousins ​​played worse than Matt Moore? Ahhh, damn it! So it happened! Kirk threw the whole match a meter higher than the hosts and only huge tight end-outs got out of this situation in positive territory. As it does not sound surprisingly, the Vikings deservedly lost the Chiefs without the Mahomes ...

But what if the Chiefs defense accelerates to the playoffs? Aren't you scared yet? And it's still a defense without three key players. Chris Jones came back, and the line of the opponent immediately flew problems. Andy Reid, thanks to his resourcefulness, pulled one match out of two - an excellent result. 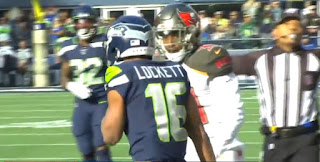 What if the Bucks left Winston? Like a "bridge", for two years. I doubt that something will come of this, but now he is not even the main problem of Tampa. This defense, except that legs in front of Wilson did not spread. A disgrace.

But what if Tyler Locket is an elite host, but nobody just wrote about it? The guy just has a total discontinuous season. And this is after 10 touchdowns and 16.9 yards per reception last year. Eat pound! And yes - give someone to the profit center already to Russell Wilson right now to calm down. And then the match is here soon ...

But what if Matthew Stafford is finally bored? Like Megatron! Well, as much as you can! Far from the worst quarterback playing 10 seasons, has 28 comebacks and 34 winning drives (for Brady, a minute, 35/44 for 19 years) and only twice his team was awarded a double-digit number of wins. The defense I praised against the removal of the Lions turned into a laughing stock.

But what if John Gruden understands that takeaway also controls time? And that this is the key to victories over many teams whose drag is an attack. Jacobs is too good to be neglected, and it's cool that the coach already understands this. This coming Thursday, much more is being decided than we might think.

But what if holograms are already being used in the USA and we are still looking at a regular screen? There, the Packers sent graphic copies to LA instead of themselves. True, it’s still buggy. The copies for some reason interacted with real things and even brought one touchdown.

What if Shane Steichen? The Chargers coaches thought, flipping through the telephone directory in search of a new attack coordinator. ABOUT! This guy also trains with us, it turns out. It fits exactly! Maybe with him, at least Melvin Gordon will play.

But what if the Browns plump before the game? No, but how can I explain this all? I no longer have versions. It was the worst moment with the Mystekles in front of the touchdown I've seen in my life. And this tells you the man who watched all the 49ers games that season. #fireKitchen

But what if another mustachioed quarterback from the 6th round plays? Also at Elvey, estimate! The guy did not throw an interception in his first match and made two touchdowns - the start is already better than Mayfield. Well, Cortland Sutton showed why Sanders was so easily traded.

But what if the main rivals of the Pats in the playoffs are not Chefs with Mahomes, but teams with a powerful takeaway? For example, Texans. Or, think - Raiders? Ahahah, I’ve joked well. “Patriots” are going to rest at the right time, because even without looking at the statistics, I can confidently say that the BB team does not lose twice in a row after a bayvik, and all that.

But what if we underestimated the Ravens defense? Against the removal, they play no worse than the Tampa, and Marcus Peters, having got out of the marshes of Los Angeles (are there such people there?) Is clearly in a good mood and is ready to make their pass defense better. Baltimore will make some noise for the time being. 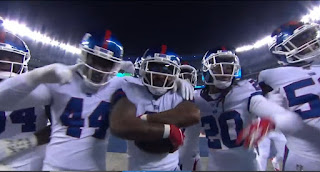 What if Jason Garrett doesn't have a cat at home? Well, no, it wasn’t before this match. He must take this black ranninbek to himself. And I'm not talking about Zeke right now. Well, the Cowboys defense is frightening - Bennett went to court, Sean Lee seemed younger, and Xavier Woods is having the best season.

But what if the Giants fire Pat Shurmur? This is his third approach to the main one and will be the third unsuccessful. Curtain. But the truth is that as a coordinator he is an order of magnitude better. And now the Giants have a regressive Barkley, turnover Jones, and brainless Baker. You can come up with the fourth musketeer yourself.
Not the best but still good.