The Super Bowl 2023 will take place on the night of February 12-13 at State Farm Stadium in Glendale, Arizona. The game begins at 6:30 P.M. ET.
Home
Houston Texans
NFL

Arian Foster, One of the best Running backs in Houston Texans and NFL History

Houston Texans and Philadelphia Dolphins Running back Arian Foster, voted four times to the Pro Bowl and ranked in the top 100 players in NFL. 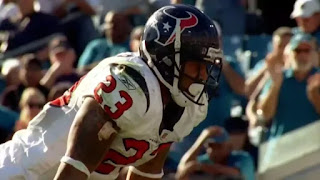 Arian Foster, who recently played for Houston, was one of the league's most productive running backs and was voted four times to the Pro Bowl.

Arian Isa Foster was born on August 24, 1986 in Albuquerque. He was one of four children in the family of Carl Foster, formerly a promising receiver from the University of New Mexico. Carl tried his hand at the Denver Broncos, but couldn't play in the NFL. Arian started playing football at the age of seven, supported by his mother, while his father was against such an early introduction of children to sports. Another hobby in those years was playing in the school theater. His parents divorced in 2000 and Foster graduated from high school in San Diego. At first he played as a linebacker, but then retrained as a runningback and became one of the stars of school football in the city. In 2003, the San Diego Union Tribune named Arian the Player of the Year.

Recruits from the University of Tennessee were the most agile in the fight for a promising running back, and in 2004 Foster went to the Volunteer State, famous for country music and corn whiskey. After spending his first season in college, he became a starting lineup player in 2005. In the first two years of his college career, Arian was a runner who played at a good level, but was not ranked high in terms of draft pick. The breakthrough came in 2007 when Foster scored 1,193 yards with 12 touchdowns. Predictions sent him to the second round, he was thinking about leaving college, but Tennessee head coach Phillip Fulmer talked him out. Arian later regretted this decision. Before the start of the 2008 season, the team changed the runningback coach and the offensive coordinator, the game system changed, he got less playing time and only scored 849 yards. To this was added a knee injury, negative reviews about the player's character and his problems off the field (in 2006 he was arrested for a fight in a nightclub), poor performance on the combine. As a result, Foster was left undrafted and signed with Houston as a free agent. 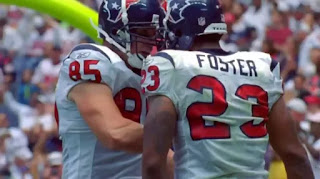 After completing pre-season training at Texans, Arian was expelled and re-signed to the club's training roster in early September 2009. He was promoted to the main championship in mid-November and managed to take part in six regular season games, scoring three touchdowns. Foster's career began to pick up steam. He started the next season with Houston's main running back and scored 231 yards in his first game. Only OJ Simpson could do more on the opening day of the season. Arian ended the championship as the NFL leader in clearance yards (1616) and touchdowns (16). He was also invited to ProBowl for the first time and included in the first All-Pro team, and in the ranking of the top 100 players in the league he took 25th place. In 2011, Foster's performance declined slightly, but he played in the playoffs for the first time, where he scored two touchdowns in the wild card round and another in the divisional round.

Then a series of injuries fell on Foster. Back problems led to the fact that out of the next three championships, he more or less fully spent only one. He left Houston in March 2016. His 6,472 yards and 54 takeaway touchdowns remain franchise records. In the summer, Arian signed a contract with Miami, but managed to play only four games for the club, injured his back again and ended his career in October. In addition to several Texans records, he is also the first-ever NFL player to score over 100 yards in his first three playoff games.

Erian's post-football life is all about popular culture. While still a Houston player, he guest-starred on Hawaii 5.0 and co-starred in Draft Day. Since 2017, he has been hosting his own podcast, where he talks with guests on various topics. In 2018, Foster took part in one of the MTV reality shows. In the spring of that year, he released his debut rap album on LeBron James's Uninterrupted Records.
Not the best but still good.