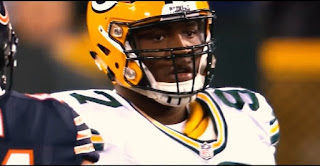 Pro Bowl Kenny Clark signed a 4-year extension for $70 million, $25M signing bonus,with avg./year at 17.5 M, a little more expensive than the contracts of Grady Jarrett and Fletcher Cox.
We have to wait for the next ones, especially Bakhtiari's.

Green Bay Packers make him the highest paid nose tackle in NFL history and the 12th highest paid defensive player in the NFL. The first extension report was by ESPN

Kenny Clark played alot the last season, he had 62 combined tackles, 1 forced fumble and 6 sacks. During the season clark ranked number two in the NFL with 49 QB pressures and 43 disruptions.

The Packers now have Za'Darius Smith and Preston Smith on contract for the next 3 seasons and Kenny Clark until 2024.

The #Packers are signing NT Kenny Clark to a four-year, $70 million extension that includes a $25M signing bonus and will pay him $37M over the first two years, per source.