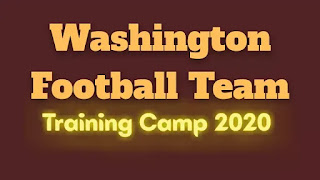 OT Saahdiq Charles does not train for three days in a row, continuing his recovery from injury.

-
TE Chase Young does not participate in team or individual coaching. The team is careful with him - Young has a thigh muscle injury.

-
RB Adrian Peterson and LB Thomas Davis are back from yesterday's weekend. RT Morgan Moses and OT Geron Christian are resting today. TE Thaddeus Moss went to training without a helmet - most likely he did not participate in the training.

-
The attack line of the first team was slightly different today, with Cornelius Lucas as LT and Timon Parris as RT. The role of LG is still Wes Martin.

-
LB Ryan Anderson was involved in the first team in an 11-on-11 game and in the final draw used his power in the red zone and provoked a fumble.

-
Greg Stroman had a good day - in addition to scoring a few goals, he earned an interception.

-
RB Antonio Gibson did two great races. At least one of them ended with a touchdown.

-
FS Jeremy Reaves intercepted a pass from Kyle Allen, who made a terrible shot.

-
Dwayne Haskins JR's QB has a touchdown after passing to Terry McLaurin while in the red zone. The movement towards Sims created a corridor that the young quarterback took advantage of.

-
QB Alex Smith looked good, but his legs seem to be limp so far. The real test of Smith's capabilities will be when he is allowed to enter into contact with him.

-
Haskins was not very confident in 11-on-11, when both starting tackles were missing in the offensive line, which caused several Haskins passes to be knocked down on the scrimmage line. The line of defense was clearly dominant. Obviously, the Washington Football teams' defensive line is much better than the offensive line.

-
The attack line as a whole looked bad today.