Willie Lanier, one of the best players in the history of the Kansas City Chiefs, winner of Super Bowl IV, and a member of the College Football Halls of Fame. 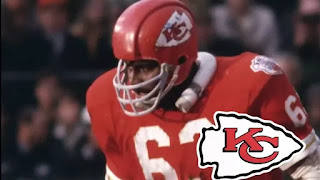 Willie Edward Lanier was born on August 21, 1945 in Clover, Virginia. After graduation, he entered Morgan State College in Baltimore. Under him, the team won the CIAA championship twice, Lanier himself was recognized as MVP of Tangerine Bowl and also twice entered the national team of stars of small colleges.

In the 1967 NFL Draft, he was picked number 50 by the Kansas City Chiefs. Lanier missed two weeks of the team's pre-season training camp, but confidently won the fight for the starting center linebacker spot. Together with Garland Boyette of the Oilers, they became the first black middle linebackers in professional football. At the same time, his career could have ended before it began. In one of the games of the debut season, he received a knee blow to the head. Despite having a concussion, he continued to train and passed out the following week. On the way to the hospital, the doctors lost his pulse three times. After that, he slightly changed his style of play, although Willie only learned the details of this story after leaving football. In the 1969 season, he and the team won Super Bowl IV.

On his account in that game there were seven grabs and interceptions, and Minnesota, which was considered the favorite, was able to score only seven points. Lanier has been in the Chiefs' starting lineup for eleven seasons, each with a minimum of two interceptions except the first and last. Six times he was selected to participate in Pro bowl, eight times included in the first All-Pro team. In 1972, Willie was named Person of the Year.

In April 1978, when injuries and age no longer allowed him to play at a high level, Lanier was traded to the Baltimore Colts. He spent three months in training camp, and then decided to retire and remain a player of the same team. The KC Chiefs later elected him to the Franchise Hall of Fame and removed Willie's No. 63 from circulation. The league included him on the 75th and 100th NFL teams. He has been inducted into the Professional Football Hall of Fame since 1986, and was elected to the College Football Hall of Fame in 2000.

After completing his career, Lanier entered the University of Missouri, and after graduation he began working in an investment company, served as its vice president.