Madden NFL series. Gamers are, figuratively speaking, trying to make it clear to EA that they have dropped the ball. 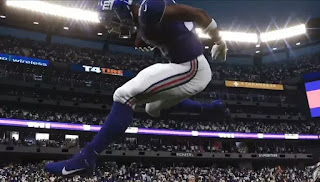 It's about the recently released another installment in the Madden NFL series. Gamers are, figuratively speaking, trying to make it clear to EA that they have dropped the ball.

The hashtag #EndMaddenMonopoly began to circulate on Twitter on Thursday. This is the second wave of discontent from fans of the game. Previously, they also promoted another hashtag on social networks - #NFLDropEA.
Read More : Brady and Mahomes share cover of Madden 22

Recall that the game was released on August 28 and was received extremely coldly by critics. Its average score on the Metacritic aggregator is only 63 points. These are reviews of gaming publications. The fans were even more critical of EA's brainchild - 0.3 points out of 10! This is the worst indicator in the history of the game.
Basically, the claims boil down to the fact that the developers have released a roster update, for which they ask for $ 60. In addition, according to players, EA has not done enough to develop the franchise mode, focusing on additional game monetization and microtransactions in The Yard and Madden Ultimate Team modes. On top of this, glitches and bugs, quite traditional for new games, were superimposed.

EA has responded to fan criticism and announced three updates focused on improving the franchise mode. They will be released in the coming months. The company also thanked fans for their "passion for the game and their feedback."
For the past sixteen years, EA Sports has held exclusive rights to NFL club logos, player names and images. Fans of the series reproach the company for laziness and complacency. The last competitors in this market for the developers were back in 2004, when Sega Sports and Visual Concepts released the game NFL 2K5, which is still considered by many to be one of the best football simulations in history. By the way, it cost 10 dollars less than the EA product.

However, gamers have little hope for a change. Although the league and EA Sports recently extended their contract to 2025, 2K has reached an agreement with the NFL Players Association that will allow their names and characters to be used in the new game. It is expected to be an arcade game, slated for release in 2021.

Listen i may not be old enough to be from the days of NFL blitz or 2k5 but I do know I love football and if I can play a game that SIMULATES that for me then great but @EAMaddenNFL hasn’t done that for YEARS @NFL u do know this is poorly representing ur brand#endmaddenmonopoly
— Erwin RileyV (@ErwinRileyv) September 4, 2020

I don't even play #madden but they need to #EndMaddenMonopoly end #EndEaMonopoly the same things that I'm seeing in this game just doesn't make sense. @NFL y'all need to do something about this.
— SickHumorTV #PS5 FTW (@SickHumorTV) September 4, 2020