Merlin Olsen career history as a defensive tackle in Utah State and Los Angeles Rams. One of the best Defense players in NFL History.

September 15, 1940, was the opening match of the American Football League. It was the third-ever organization with this name, and the fourth most successful, which eventually merged with the NFL. At the same time, the league lasted only two years, and then the United States entered World War II and the number of players decreased significantly. Well, on that day, at home in Ohio, the future winners of the Columbus Bullies lost 2-14 to the Milwaukee Chiefs. 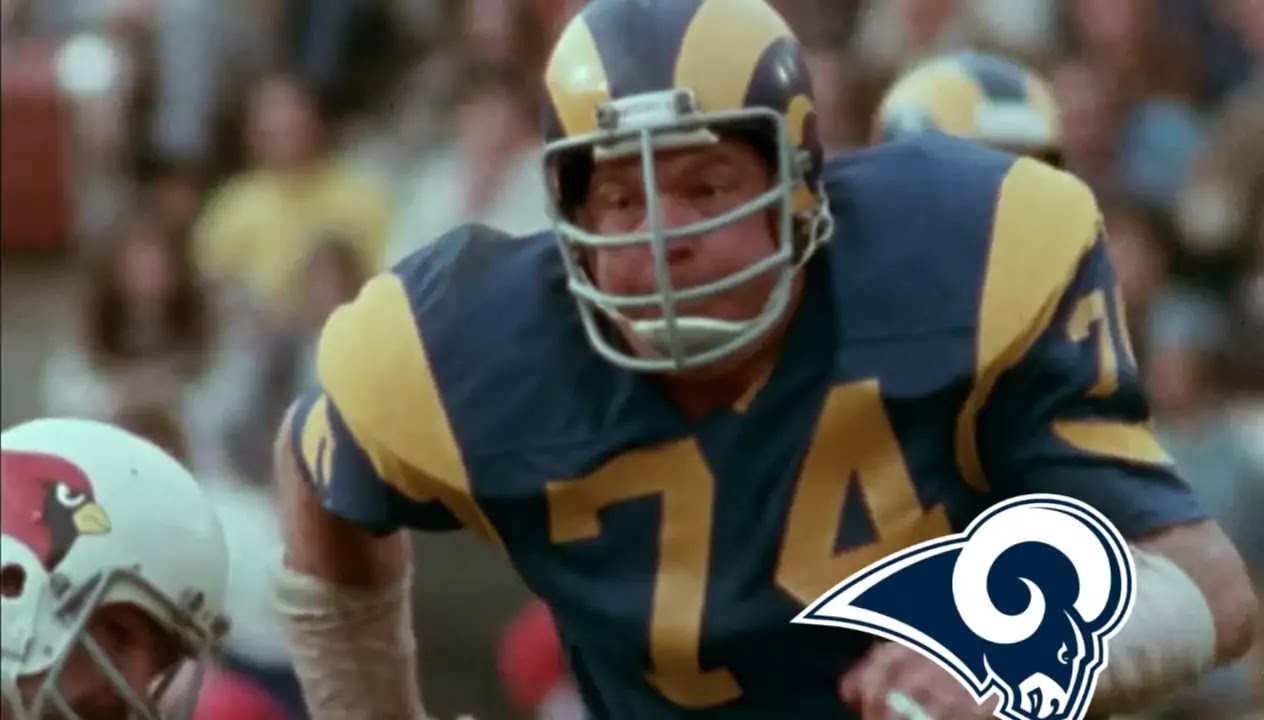 In 1975, for the first time in history, which is even a bit surprising, the teams of Notre Dame and Boston College played against each other. The confrontation between the two Catholic universities has received the nickname Holy War, as has the much older rivalry of Brigham Young and Utah. The first match was played at Foxborough Stadium and ended in a 17-3 victory for the Irish. They also have a clear advantage in this duel as a whole.

Merlin Olsen, a distinguished Los Angeles Rams defender and member of the College and Professional Football Hall of Fame, as well as an equally famous commentator.
Merlin Jay Olsen was born on September 15, 1940 in Logan, Utah. His father was a university professor, his mother was an elementary school teacher. He was the second of nine children in the family, and his two younger brothers, Phil and Orrin, later also played in the NFL. At school, Merlin dreamed of a basketball career, but in the ninth grade, the coach expelled him from the team, saying that Olsen needed to do art, not sports. Despite this, he was later offered an athletic scholarship to the University of Utah, where he concentrated on football.

Olsen played three years for Utah State in the defense tackle position, was twice included in the national team of stars of the season, and in 1961 was awarded the Outland Trophy as the best domestic linear student football. In addition, Merlin studied successfully, was an active member of one of the student fraternities. He later entered the University Sports Hall of Fame, the football field at Utah State Stadium was named after him, and in that same fraternity, Merlin Olsen Day is annually held. There is a monument to him in front of the entrance to Maverick Stadium on the campus.

In 1962, Olsen was drafted in both professional leagues, becoming the first Utah State representative to be drawn in the first round. In the NFL, the Rams did it in third overall, in the AFL Broncos in second. Merlin made a choice in favor of Los Angeles, fearing that the new league would not stand up to competition and curtail its activities. He stayed with the Rams throughout his career, earning a reputation as one of the main defense stars of the 1960s.

Olsen has missed just two games in fifteen league seasons and has been invited to Probowl fourteen times. He was included in the All-Pro first team five times. In 1962, he received the NFL Rookie of the Year award. Rams' four line defense terrified rivals, but this was not enough to win the title. During Merlin's career, the team won the division six times, but could not go beyond the final of the conference. The last game of his career was the 1976 NFC final against Minnesota. In 1982, Olsen was elected to the Professional Football Hall of Fame the first time, and he was two years earlier in student football. His No. 74 in Rams was taken out of circulation.

After completing his career, Olsen became a famous commentator, worked on five Super Bowls and nine Rose Bowls, was one of the most recognizable experts on NBC. In addition, he continued to develop his acting career: Merlin began acting when he was a player. Most notable was his role in the series "Little House on the Prairie", one of the most popular in the United States at the turn of the 1970s and 1980s. Together with his wife Susan, he raised three children.

Olsen was diagnosed with cancer in 2009. He underwent three courses of chemotherapy, but the body could not cope with the disease. He died on March 11, 2010 at the age of 69.