ESPN's Adam schefter announced on his Twitter account that Miami Dolphins has released QB Josh Rosen In an expected move. 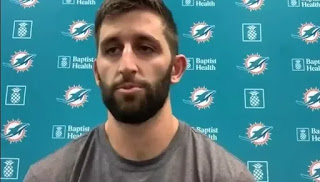 In an expected move, the Miami Dolphins are disposing QB Josh Rosen rather than making a trade for him.

This is the second time a team has abandoned Rosen in the past 17 months and put an end to an unsuccessful period in Miami.

The Dolphins admit, through a mistake from Rosen's deal, that they abandoned him after a year, and it also gives Rose a fresh start and a rare third chance to save his career in American football.

The Dolphins preferred Tua Tagovaiola and Ryan Fitzpatrick as their QBs in the NFL 2020 season. In training camp Rosen failed to hold off Tagovailoa who had shown great improvement in this season.

It's weird that the Dolphins gives up Rosen with his cheap $ 750,000 salary - but they have clearly seen enough of Rosen to decide to gives him up.
Rosen, who is 23 years old, enters American football for the third time with a third team.

A summary of Friday’s QB news: