Deep Passes Are Twice as Effective As Short Passes

I use the term “adjusted” because this calculation takes into account a bunch of factors. The defense might commit a penalty giving the offense yardage even without a completion, the offense might commit a penalty moving them backwards, the pass might be incomplete resulting in zero yards, or the pass might be complete and the receiver gains yards for the offense. Taking all of these outcomes into account, the results show that quarterbacks can double the expected yards of a play by throwing it deep.


But this analysis highlights an example of when NFL statistics can’t fully explain the picture of what goes on in the game. Imagine two games in a casino. One pays $12.30 on average for a bet for $3.33 and the other pays $6.10 on average for a bet of $3.33. Who would ever play the second game? In the NFL, every down is sort of like betting 3.33 yards since you have three tries to get 10 yards. A deep pass yield double the yards for the same bet compared to short passes. 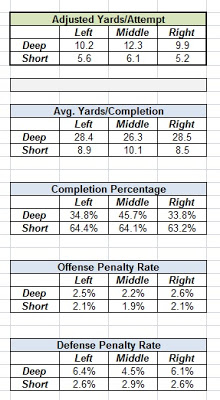 So, then why shouldn’t quarterbacks throw deep every pass? The answer is pretty obvious. Everything changes if deep passes become the norm instead of the exception. The whole reason for success downfield is that it is a rare occurrence with the power to catch the defense by surprise. Since 2006, deep passes account for only about 20% of all throws. Teams obviously recognize that deep passes don’t work as well when they are overused.

This brings us to a final point. What is the optimal balance between deep and short passes? If deep passes should be used sparingly to stay effective, how do we define sparingly? Is the NFL’s current balance of 80/20 the most optimal? Would quarterbacks increase their yards per attempt if they slightly increased their number of deep balls? I’ll crunch the numbers and figure it out with another post.
Covers everything about NFL, NFL Draft, NFL News and Rumors, Super Bowl, best NFL players in history, best NFL players, NFL Mock draft and more. YouTube TV NFL.