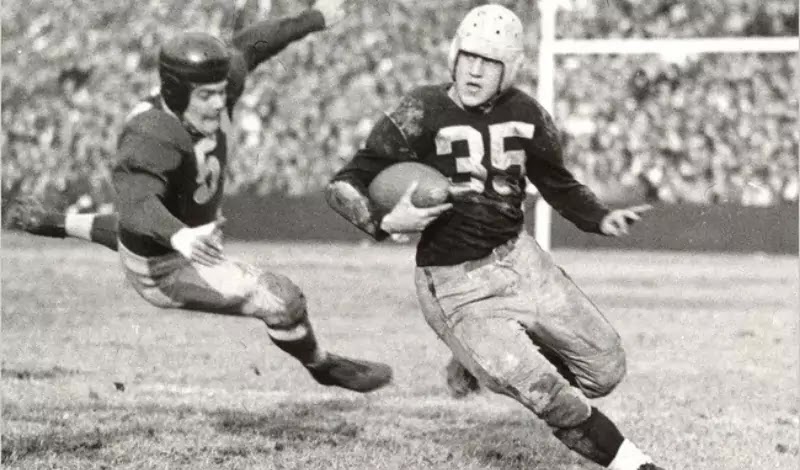 William McGarvey Dudley was born December 24, 1921, in Virginia. He graduated from Bluefield High School and at the age of sixteen was offered an athletic scholarship from the University of Virginia. It was then $500 to cover tuition, room and books. He was invited to join the team as a punter and kicker, but then Bill changed his role to halfback. True, for the first two years he was only the fifth player in that position. In 1941, Dudley took over at the base and became the Southern Conference leader in total offensive yards by season's end. He became the first recipient of the Maxwell Award for Best Player in College Football in college history. Bill later played on the college all-star team in an exhibition game against the Chicago Bears. He was elected to the College Football Hall of Fame in 1956.

In the 1942 draft, he was selected at number one overall by the Steelers. In his first career game, Dudley first scored a 55-yard touchdown on a carry and then another on a kickoff return. By year's end, he was the NFL's all-time leader in rushing yards and was named to the first All-Pro team. In 1943, he was drafted into the Army. Bill was in the air force, trained in Florida and Texas, while also playing football for his unit's team. Toward the end of the war he was in the Pacific theater. At the end of 1945 he returned home and managed to play in four Pittsburgh games. The following season, Dudley again led the league in rushing yards and interceptions and yards on punt returns. He was named NFL MVP and became the first athlete in history to win the award at the college, military and professional levels.

From 1947 to 1949, Bill played for the Detroit Lions, was the team's most productive player, and was named to the All-Pro team twice more. He was then traded to Washington, where he also spent three seasons and was also the offensive leader. Already as a player for the Redskins, Dudley made it to the Pro Bowl twice. In all, he gained 3,057 yards on takeaways, 1,383 yards on receptions, 1,515 yards on punt returns and 1,743 yards on kickoff returns in his nine-year professional career. He totaled 44 touchdowns, 121 extra-points and 33 field goals. He was elected to the Pro Football Hall of Fame in 1966. Bill was named to the 1940s All-Star team, the Pittsburgh Steelers' Team of Legends and the Washington Redskins' Ring of Honor.

After his career ended, Dudley worked as a scout for the Steelers and Lions and was in the insurance business. He was then elected four times to the Virginia State Legislature, proving himself to be an outstanding politician. Bill Dudley died February 4, 2010, at his home from the effects of a massive heart attack. He was 88 years old.