10 NFL Players Sold Their Super Bowl Rings in a weird Stories. SB rings are not easy to win,, so you'd think that anyone who got one would hold on it

Super Bowl rings are not easy to win,, so you'd think that anyone who got one would hold on to it for dear life.

well, that's not always the case, several Super Bowl rings have hit the market over the years, and in many of those instances the reason for their sales have been pretty ridiculous. Here are 10 of the craziest! 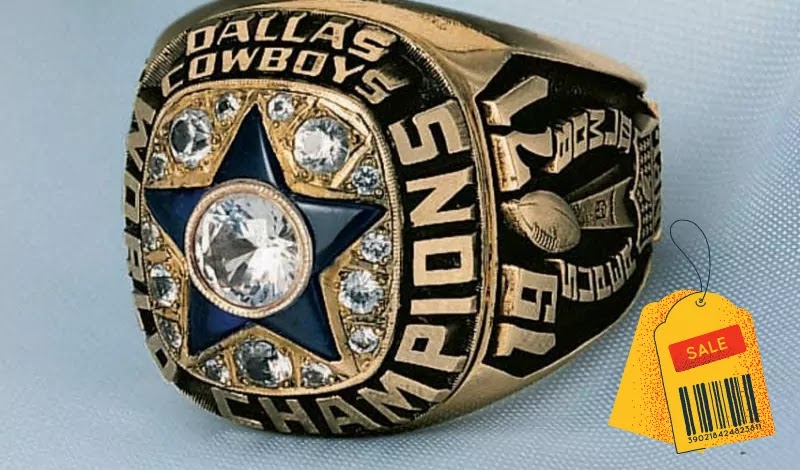 Guy is often regarded as the greatest punter ever. A three-time Super Bowl Champion with the Oakland Raiders. Guy earned seven pro bowl selections, along with six first team and two second team all pro nods. On top of that, Guy won the 1975 golden toe award, and he was named to the NFL's 1970s all decade team and the 75th and 100th anniversary teams. Guy was a prime example of why kickers are indeed athletes too, if you disagree just ask the Pro Football Hall of Fame where guy is enshrined!.

Sadly Guy experienced financial woes after his playing career, he filed for bankruptcy and a judge ordered Guy to put all three of his Super Bowl rings up for auction as a way of paying off the debts. The three championship rings from the 1976, 1980 and 1983 seasons all sold at the auction for a reported price of 96216 dollars, it was a sad story, afterwards, Guy acknowledged that you have to do what you have to do regardless of his ordeal off the field guy's place in the Hall Of Fame is set, nothing can change that.

Gilliam spent four seasons with the Pittsburgh Steelers as Terry Bradshaw's backup, he won Super Bowl rings with the Steelers curtain dynasty in the 1974 and 1975 seasons, sadly Gilliam's going to fail career was derailed by drug and alcohol addiction, he was on the New Orleans Saints roster briefly in 1976 and 1977, but Gilliam never wound up playing a game for them, he briefly played in the USFL but was out of the league by 1984.

Gilliam's drug addiction prompted him to pawn his two Super Bowl rings, eventually, his friends and fans were able to purchase the rings, and they were returned to his father, sadly, Gilliam passed away at the age of 49 on Christmas day in 2000, it was believed to be a drug overdose.

Rocky Bleier the Notre Dame star was drafted in the 16th round 417th overall by the Pittsburgh Steelers in 1968, and he turned out to be quite the steal having spent his entire career with the Steelers, get it well anyway Bleier became a key component on the 70s steel curtain dynasty forming a potent offense with Terry Bradshaw Franco Harris and Lynn Swann.

Bleier and Harris were one of the most unstoppable rushing duos ever seen at the time,

Bleier was a member of all four Steelers Super Bowl championship teams in the 70s. Unfortunately he would have to give up the rings long after his playing career according to a January 1997 story from the Pittsburgh post gazette Bleier filed from bankruptcy following a divorce he reportedly owed his ex-wife nine hundred thousand dollars as a part of an agreement, Bleier claimed to have sold his four championship rings for $40 thousand to meet tax payments.

After things were straightened out, Bleier was able to buy back his four precious Super Bowl ring in 2004. He told police in Charlotte North Carolina that three of his rings had been stolen, he offered a 500 reward for return of the items. The rings presumably found their way back to Bleier, a November 2019 Pittsburgh tribune review article claimed that Bleier's four kids will each inherit one Super Bowl ring after he passes.

Henderson played for the Dallas Cowboys, San Francisco 49ers, Houston Oilers and Miami Dolphins. The standout linebacker earned a 1978 Pro Bowl selection and won his lone Super Bowl ring with the Cowboys in the 1977 season, sadly Henderson's career was marred by a drug addiction that forced the Cowboys and later the 49ers to release him after undergoing rehab Henderson returned to football and played for the Dolphins in 1981 only to suffer a career-ending neck injury.

Henderson unfortunately ran into legal troubles after his playing career that led to two years and four months in prison time owing $156,088 to the IRS.

Henderson's Super Bowl ring was auctioned off, and it was sold for 11 000, but this sad story had a happy ending, he won a $28 million Texas lottery in 2000 and was able to overcome his drug and alcohol addictions.  Henderson no longer drinks, and he now works as a motivational speaker.

Thurston was a key part of the Green Bay Packers 1960s dynasty led by Vince Lombardi and Bart Starr. Thurston won six total NFL championships, one for the Baltimore colts in 1958 and five with the Packers, the all-pro guard also helped the packers win Super Bowl one and Super Bowl 2 against the Kansas City Chiefs in Oakland Raiders respectively. Sadly, Thurston experienced financial problems long after his playing career in 1984, Thurston was ordered to pay a fee of 190 thousand dollars after he and his restaurant business partners withheld employees salary income taxes, the fee was increased to more than $1.7 million over time because of interest, in 2011, he was forced to sell a Super Bowl two rings on top of other memorabilia because of the hefty semi-odd. Thurston's ring wound up selling for $50,788 at an auction. The packers' legend passed away at the age of 80 in december 2014.

Grantham was a superstar linebacker for the New York jets from 1960 to 72. Their five-time AFL all-star led the jets to an AFL championship in 1968 into a massive upset over the heavily favored Baltimore colts in Super Bowl 3. Sadly 40 years after that Super Bowl victory, Grantham a recovering alcoholic had to put up his ring for sale to pay off his medical bills, he was suffering from throat cancer and the cost of treatment was through the roof, Grantham reluctantly decided to auction off his ring, however a treatment center in New Jersey called freedom house raised $18 thousand to help Grantham win his ring back and when the auction house heard his story, they took the ring off the block returned it free of charge to Grantham and the money that was raised by freedom house was used to help the former jet pay off his medical bills. It was a classic case of what goes around comes around. Grantham helped raise $1.3 million for the freedom house, they repaid him by giving him his ring and the money he needed to pay for his treatment.

Crutcher was a hulking six-foot three 229 pound linebacker for the Green Bay Packers during their aforementioned 60s dynasty, Crutcher was a part of the Super Bowl one and Super Bowl 2 championship teams, retiring after the 1972 season with two rings back. In 1987 bob green of the Chicago Tribune detailed a hilarious story involving one of Crutcher's Super Bowl rings, Green came across a newspaper rat regarding a Super Bowl ring for sale, the seller named bill left a p.o box address in Fort Collins Colorado. Green got in contact with bill, who shared the tale. Bill said he bought the ring off a man who discovered it on the floor of a bar in Green Bay. Bill zetty purchased the ring for the parking price of 75, and he knew it belonged to Crutcher as his name was engraved on it.

Bill said he was offered $18,000 for it, but he was waiting for higher offers, Green then got in contact with Crutcher who reluctantly told the story, he met with three ladies one evening at a motel and when he woke up the next day the ring was gone.

Crutcher decided to buy a replica ring for $700 without telling the story to anyone before finally revealing it to greed.

The five-time pro bowl cornerback spent his entire career with the Raiders, which banned from 1977 to 1986. Hayes was a part of the Raiders Super Bowl winning teams in the 1980 and 83 seasons, helping them achieve dynasty status, named to the NFL's 1980 all decade team. Hayes took home the 1980 defensive player of the year award, he earned one first team and five second team all pro selections, sadly, Hayes entered a gambling addiction and experienced serious financial problems after his playing career.

He claimed to have lost the money in a charles Barkley kind of bet following an autographed signing event.

Hayes experienced serious mouth pain and went to see a dentist only then did Hayes realize that his wallet was at home, which was a several hour commute he's found a local pawn shop and decided to punt his Super Bowl ring receiving an 800 loan. The deal was that he could get the ring back within four months with a 10 interest rate each month.

Sadly, health problems prevented Hayes from making the trip back to the pawn shop to get a Super Bowl Ring. Some time later Hayes was informed that his Super Bowl ring was now up for sale on ebay he and Mark Davis got in contact with the seller with Hayes even offering to pay her $16500 it was all to no avail.

When it comes to selling a championship ring of any kind, it's hard to find a much more heartwarming story than that of Je'Rod Cherry, the former safety played with the New England patriots from 2001 to 2004 earning Super Bowl rings with their 2001, 2003 and 2000 championship teams.

Cherry retired after winning the third ring, ESPN's Ian O'Connor detailed this beautiful story in january 2017. Back in 2008 Cherry went to a religious youth conference a group of teenagers is hoping to raise enough funds to help build an orphanage for 24 children in Thailand, they needed $20 thousand more to reach the goal and a staff member teased Cherry about possibly selling one of his Super Bowl rings. Though it was apparently a friendly joke.

Cherry actually thought it over and decided to run a raffle for a Super Bowl 36 ring, the raffle brought in over $200,000 to help the ages hope Boston for Africa and feed my starving children charities and thanks to cherry's generosity those teenagers reached their goal of building the orphanage for the 24 kids all it took was one little joke from a staff member to have Cherry change the lives of dozens of kids.

New England patriots owner Robert Kraft has celebrated six Super Bowl championships this century but the powerful NFL owner only holds four of those rings in may 2020, he auctioned off his Super Bowl 51 ring which sold for a whopping $1.025 million it's worth noting that the bidding started at $75,000, so he sold off one of the six rings why does he still only have 4 and not 5 remaining because his Super Bowl 39 ring was handed to Russian president Vladimir Putin.

Many of you have heard the tale, the one where Kraft showed Putin the ring during a trip to Russia in 2005.

Jeff Benedict's 2020 book called the dynasty stated that Kraft received a phone call from the White House during which the bush administration suggested that he let Putin keep the ring as a gift.

Kraft ultimately agreed okay, so we didn't actually sell the ring, but it was certainly an intriguing story to the point where it had to be included on the list you usually don't hear stories of a Super Bowl winning owner handing a ring over to a president.