Everything You Need To Know About Pepper Johnson

Pepper Johnson a successful player and coach in football league, his great History with New York Giants and Patriots made him a legend in NFL.
On July 29, 1986, the jury ruled on the claim of the United States Football League against the NFL. The essence of the accusations boiled down to a violation of antitrust laws, representatives of the USFL stated that competitors, through blackmail, forced television to refuse to broadcast the league games. The complainants  demanded either to annul the existing contracts and prohibit the NFL from concluding new ones with more than two TV channels, or even to split the organization into two independent leagues. On the issue of antitrust violations, the jury pleaded guilty to the NFL, but the rest of the claim was dismissed, and the USFL awarded compensation in the amount of one dollar. The victory was Pyrrhic. Four days later, the league announced the cancellation of the season, and then completely closed. Over the course of four years, several appeals were filed against this decision, which led to nothing.

Pepper Johnson, a player and coach who holds five championship rings. He won the Super Bowl twice as a New York Giants player and three times as the New England Patriots coach. 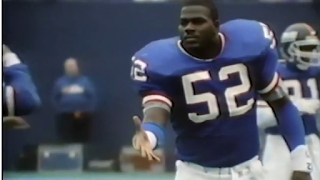 Thomas Johnson was born on July 29, 1964, in Detroit. Pepper's nickname stuck to him as a child: so his aunt called him for the habit of pouring ground black pepper into cornflakes. After graduating from high school, Johnson went to the Ohio State program, then coached by Earle Bruce, one of the finest coaches in college history. For four seasons Pepper was the best player, the team captain. He was twice recognized as the best defender of the Ohio State, in 1985 he entered the team of stars of the season.

In the 1986 draft, the Giants picked Johnson in the second round. The head coach of the team was then Bill Parcells, and the defense was coordinated by the not so great and terrible Bill Belichick. Already in his debut season, Pepper, together with the team, won the championship title, the first for New Yorkers in a long time: Denver Broncos was beaten in Super Bowl XXI with a score of 39-20. The success was repeated in the 1990 season: Super Bowl XXV Giants beat Buffalo 20-19. By that time, Johnson had turned from a rookie into one of the leaders of the club. That season, he was first invited to Pro Bowl and was selected to the All-Pro first team.

In 1993, Pepper left New York and went to Cleveland, where he was reunited with Belichick. He played three seasons for the Browns, played again in Pro Bowl and generally showed good efficiency, but the team did not shine, and in 1995 he left for Baltimore Ravens altogether. Johnson played one season for Detroit, and then ended up in the New York Jets, where Bill Parcells was the head coach and Bill Belichick was coordinating the defense. Pepper's career circle has closed. He played two more seasons and retired in 1999.

Before the beginning of 2000, all the same Belichick headed the New England Patriots and called Johnson to his headquarters. The first year he worked as one of the assistants, and then was appointed coach of inside linebackers. From 2004 to 2011, Pepper worked with the line of defense, then again with the linebackers. He spent fourteen seasons with the Patriots, contributing to Super Bowl victories XXXVI, XXXVIII and XXXIX. Along the way, Johnson co-authored a book about the 2001 championship season.

In 2014, Pepper worked with the line of defense in Buffalo Bills, then held a similar position in the Jets for two seasons. After that, there was a slight pause in his career. Johnson returned to coaching after starting the Alliance of American Football, where he worked with linebackers for Mike Singletary at the Memphis Express. This spring, Pepper briefly served as Los Angeles Wildcats Defense Coordinator for the XFL.

Pepper's son, Dionte Johnson, tried to follow in his father's footsteps. He played fullback for the Ohio State and was also the team captain. In 2008, he signed with Arizona but was expelled due to a leg injury. Dionte is now in business.
Read Also : Everything You Need To Know About Bo Jackson
Covers everything about NFL, NFL Draft, NFL News and Rumors, Super Bowl, best NFL players in history, best NFL players, NFL Mock draft and more. YouTube TV NFL.