The last day of July celebrates the birthday of Jonathan Ogden, the brilliant offensive tackle of Baltimore Ravens, winner of Super Bowl XXXV, and a member of the College and Professional Football Halls of Fame. He turns forty-six years old.
In 1997, the NCAA established a two-year probationary period for the Grambling State program for violations of association rules in recruiting players. The same verdict was issued against the team coach Eddie Robinson, one of the best specialists in the history of college football. In the same year, Robinson retired from his coaching career and was inducted into the College Football Hall of Fame. 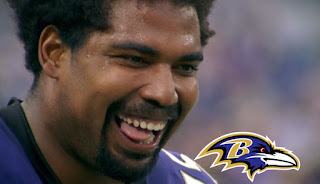 The last day of July celebrates the birthday of Jonathan Ogden, the brilliant offensive tackle of Baltimore Ravens, winner of Super Bowl XXXV, and a member of the College and Professional Football Halls of Fame. He turns forty-six years old.

Jonathan Phillip Ogden was born on July 31, 1974, in Washington, DC. At school, he not only played football, but also showed himself well in track and field — shot put and discus throw. When he entered college, Ogden chose UCLA over Florida precisely because in California he was promised the opportunity to participate in athletics competitions. The college representatives did not regret it: in 1996, Jonathan won the NCAA Division I shot out tournament with a score of 19.42 m. Such figures are not always shown even by participants in the Olympic Games. He looked no less brilliant on the football field. For four years, Ogden was the UCLA Bruins' starting left tackle. In 1993, he and the team won the Rose Bowl, and at the end of the 1995 season, he reaped a rich harvest of individual awards, including a linear year.

In the 1996 Draft, Jonathan was selected by Baltimore under the overall fourth pick. He became the first drafted player in the franchise's history. Much credit for this went to Ravens General Manager Ozzy Newsome, who convinced the club owner Art Modell. He wanted to see Lawrence Phillips running in Baltimore. Time has confirmed Newsome's case: Phillips spent only three seasons in the NFL, played in Europe and Canada, ended up in prison in 2008, and committed suicide in 2016 after being accused of murdering a cellmate.

Ogden, from the first game, became the main tackle of Ravens, the leader of the team not only on the field, but also in the locker room. In total, he played twelve seasons in the NFL, in eleven of which he received an invitation to Pro bowl. In the regular season, Jonathan played 177 games. In the 2001 season, he and his team won Super Bowl XXXV. In addition to his direct responsibility for protecting the quarterback, he picked up ten fumbles, made ten grabs and two touchdowns on the reception. Four times he was included in the first All-Pro team. In the 2002 season, Ogden was voted Offensive lineman of the Year. The league later included him on the 2000s All-Star Team and the NFL Centenary Team. Jonathan retired in 2008 but was named Ravens Honorary Captain in Super Bowl XLVII, the franchise's second win. In 2012, he was elected to the Student Hall of Fame,

After completing his career, Ogden was engaged in the car sales business in Maryland, starring in commercials. Now he and his wife live permanently in Las Vegas, where he runs a charitable foundation that supports local schools and student athletes.
Not the best but still good.