The Super Bowl 2023 will take place on the night of February 12-13 at State Farm Stadium in Glendale, Arizona. The game begins at 6:30 P.M. ET.
Home
Las Vegas Raiders
NFL

Daryle Pasquale Lamonica was born July 17, 1941 in Californian Fresno in an Irish-Italian family. Already at school, he showed himself as an excellent athlete, played for teams in four sports, was considered one of the best quarterbacks in California. After leaving school, he was offered a contract by the baseball Chicago Cubs, but Lamonica chose football and entered the University of Notre Dame.
Seventy-nine years old today marks Daryle Lamonica, former Buffalo and Oakland quarterback, three-time AFL champion and two-time League MVP. For his tendency to throw long passes in most game situations, Lamonica earned the nickname "The Mad Bomber". 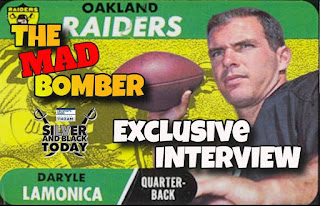 Daryle Pasquale Lamonica was born July 17, 1941 in Californian Fresno in an Irish-Italian family. Already at school, he showed himself as an excellent athlete, played for teams in four sports, was considered one of the best quarterbacks in California. After leaving school, he was offered a contract by the baseball Chicago Cubs, but Lamonica chose football and entered the University of Notre Dame.

From 1960 to 1962, Daryle was the starting quarterback for the Irish. He spent thirty matches for the team, scored 1363 yards with eight touchdowns and sixteen interceptions. In 1963, he was drafted in two leagues at once. In the NFL, Lamonica was selected under 168 number (12 round) Green Bay Packers, and in the NFL under 188 number (24 round) Buffalo Bills. He opted for the latter, deciding that in the Bills he would have more opportunities to prove himself. However, things turned out differently. For four seasons, Daryle was Jack Kemp's understudy, only appearing on the pitch in the event of an injury or a very depressing starting quarterback. During this time, he had only four starting games and 2,499 yards. Bills reached the AFL finals three times during that period and won two Championship titles, but he himself had only one pass in those games.

In the spring of 1967, Lamonica was traded to the Oakland Raiders. In the new team, he unexpectedly opened up for many and in the season sketched 3,228 yards with thirty touchdowns and twenty interceptions. The Raiders went through the regular season with one defeat, won the division, and beat the Houston Oilers 40-7 in the final. For Oakland, the league victory was the first in history, and Daryle received the AFP MVP award. Then there was the first Super Bowl for the team, in which the Raiders lost to the Packers. Oakland made the AFL final in the next two seasons. In 1969, Lamonica shared the Most Valuable League Player Award with Joe Namath. Leaders Raiders recognized as the best UPI and Sporting News, and AP preferred Broadway Joe. In the same year, Daryle became the first player in professional football history to make six passing touchdowns in the first half. The victim of this record was his former team, the Buffalo Bills. Then the nickname "Mad Bomber" stuck to him. He threw often and far, because of which the average transmission accuracy fluctuated around 50%.


One of Daryle's first big sports thrill was he played in the Little League World Series in Hershey Park PA. After high school, he turned down a professional baseball contract with the Chicago Cubs.


Beginning in 1970, Lamonica's performance began to decline. In 1973, he gave up the starting quarterback to Ken Stabler, who didn’t have such a strong hand, but had a better defense read and passed more accurately. Three years later, Stabler will lead the Raiders to victory in the Super Bowl. Lamonica will have completed his career by that time. After the end of the 1974 season, he left Oakland Raiders , and in 1975 played a bit in the World Football League for Southern California Sun. In addition to three league titles and two MVPs in the AFL, Daryle also had three All-Star Games and two Pro Bowls. In twelve seasons, he averaged 19,154 yards and 164 touchdowns on 138 interceptions.He was also efficient during the 1968 season, including the Raiders' win in the Heidi Game.

After the end of his career, Lamonica retired from football affairs and became a TV presenter. For a long time he worked on the Fox Sports channel, where he hosted the fishing show "Outdoors with the Pros". Now Daryle is retired, today he is 79 years old.


Daryle Lamonica went 66-16-4 as a starter, good for a 78.4% winning percentage, second best in NFL history (Otto Graham is the highest at 81.0%). In the American Football League, Lamonica's winning percentage as a starter was 90.0%, on 40 wins, 4 losses and 1 tie in 45 games, the best ever in the AFL.Check out this youtube video of Daryle
References
Not the best but still good.