The Super Bowl 2023 will take place on the night of February 12-13 at State Farm Stadium in Glendale, Arizona. The game begins at 6:30 P.M. ET.
Home
Dallas Cowboys
NFL

Mr. Cowboy Bob Lilly, One of the best players in dallas and the league history

Mr. Cowboy Bob Lilly, one of the best players in Dallas and the league history, a member of the Professional and College Football Halls of Fame.


Eighty-one years old today marks Mr. Cowboy Bob Lilly, one of the best players in Dallas and the league history, a member of the Professional and College Football Halls of Fame. 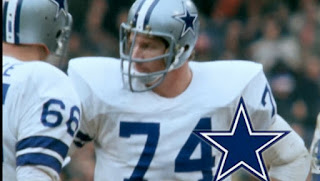 Robert Lewis Lilly was born on July 26, 1939 in Olney, Texas. His grandfather and father were both farmers, but several years of drought in the 1950s forced the family to move. Bob graduated from school in Oregon. There he was one of the leaders of the football and basketball teams, was the state champion in javelin throw. After high school, Lilly entered the Texas Christian University. As part of the team, he twice won the Southwest Conference tournament, and her defense was one of the best in the country. In the 1960 season, the THU team conceded on average only eight points per game.

In the 1961 NFL Draft, Dallas Cowboys was selected as the 13th overall pick. He became the first drafted player in the franchise's history. Bob began his professional career as a de-end, but after a couple of years he started playing tackle. Dallas Doomsday Defense, formed by the mid-1960s, became one of the best in history, and Lilly was an integral part of it. In the 1970 season, the Cowboys reached the Super Bowl for the first time, where they lost to Baltimore. A year later, the team won the title, beating Miami in Super Bowl VI. Lilly sacked Bob Griese in that game, costing the Dolphins 29 yards. This episode became one of the brightest in his career.

In total, Lilly spent fourteen seasons with Dallas, playing in 196 regular season games. He was invited to Pro Bowl eleven times, and was selected to the All-Pro first team seven times. During this time, he missed only one Cowboys match - the 1973 NFC final against Minnesota due to a leg injury.

In 1975, Bob became the first player in the Dallas Cowboys Ring of Honor. Since then, not a single ceremony of introducing new players there is complete without his participation. In 1980, Lilly was inducted into the Professional Football Hall of Fame, where he also became the first Cowboys player. A year later, he was inducted into the College Football Hall of Fame. There are no officially retired numbers in Dallas, but Bob's # 74 has not been used by anyone since. The NFL included Lilly on the All-Star Teams of the 1960s and 1970s, 75th and 100th Anniversary teams.

As a player, Bob carried his camera with him everywhere. He did not leave this hobby even after the end of his career. In 1983, Lilly, in collaboration with journalist Sam Blair, released an album of his work. For five years he lived in Las Cruzas, New Mexico, where he opened his photo gallery. He also owned a beer business for some time. Now Bob Lilly and his wife live permanently in a small town in Texas.