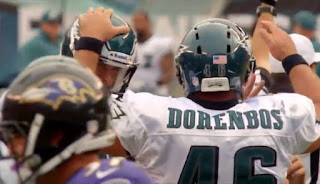 Jonathan Paul Dorenbos was born on July 21, 1980 in the town of Humble, one of the suburbs of Houston. He spent his childhood in Washington state. It was there, when John was twelve years old, that his father killed his wife. Programmer Alan Dorenbos was sentenced to more than thirteen years in prison, and John was sent to a foster family. Later, his uncle and aunt received custody rights. He moved to California, where he graduated from high school and became interested in magic tricks.

Dorenbos played for the school's hockey, basketball, baseball and soccer teams. In the last two sports, he has achieved notable success. After high school, he entered Golden West Community College, but a year later followed his friend to the University of Texas at El Paso. There Jon changed his linebacker and fullback roles to the long snapper.

Before the 2003 NFL Draft, in open training at Dorenbos University, Dorenbos was able to impress the scouts with an average of 0.62 seconds per snap, which was noticeably less than the league. Rams' special team coach Bobby April named him one of the best players of all time. In the draft, John, as expected, was not chosen, but immediately after him he signed a contract with Buffalo. With the Bills, he played a season and a half, missing a significant time with a knee injury. In September 2005 he was expelled. After that, Dorenbos did not play for long for Titans.
Jon got into his team in November 2006, having signed a contract with Philadelphia. There he became one of the key players in the special teams and a year later received a long-term contract. In the 2009 and 2014 seasons, Dorenbos was part of Pro Bowl. In eleven years with the Eagles, he played in 162 matches, in addition to fulfilling his direct duties, making 23 tackles. In the summer of 2017, he was traded to the Saints for the peak of the seventh round of the 2019 draft, but he never played for the team from New Orleans. In September, Jon was diagnosed with aortic aneurysm, underwent open-heart surgery and retired. In February 2018, the Philadelphia Eagles won the Super Bowl LII. By the decision of the owner of the club Jeffrey Lurie. Dorenbos also received the champion's ring.
After finishing playing, Jon devoted most of his time to his childhood passion - card tricks. He became a professional in this area, and performed in Las Vegas and Hollywood. In 2016 and 2019, Dorenbos took part in America's Got Talent show. He also regularly serves as a motivational speaker, is engaged in business and charity. For a while, Jon was a presenter on the club channel Eagles.