Campbell returned to his studies, but several other experienced players got their day off, namely Ronnie Stanley, Pernell McPhee, D. Wolfe, Boyle. 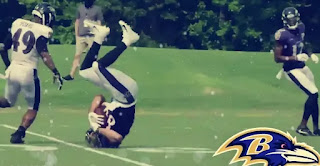 - Campbell returned to his studies, but several other experienced players got their day off, namely Ronnie Stanley, Pernell McPhee, D. Wolfe, Boyle, J. Smith.
No changes for the injured.

- J. Scott tries, works, but he is unlucky. He mainly works with the 2nd and 3rd line-ups, so there are usually heavy transmissions from young and not very accurate quarters in his direction (Huntley, McSorley). Either they throw him over, or he almost gets it himself. After another failed ball, he threw his helmet into a nearby forest in frustration. Oddly enough, our new starting safety D. Elliott calmed him down. At the end of the training session, Scott did catch TD in Peters' cover. Again, the reception was heavy in the fall, but at the same time Jaleel received a blow to the ribs and could not get up immediately. But it seems to be nothing serious.

- Joint training sessions in the off-season between Proche and WG3 make themselves felt. They both work with the 2nd team and Proche catches everything that flies in his direction. It also shows itself well in 1v1 classes. It also beats starters, including Thomas in previous trainings.

- LB Chris Board performed well today. He seems to have been forgotten after picking 2 LB Draft, but last season Chris was given the opportunity to prove himself at the start of the regular season. He did not succeed in the end, but he is still a young player and continues to progress. Harbo praises him.

- The day finally won the Attack after the "victorious" TD from Boykin. The attack was celebrating, the Defense made a "friendly trash-talk", but everything was friendly and peaceful. In the middle of the entire movement, there was Tavon Young, who did a very strong training session and played excellent cover several times, including against Brown.