Barret Robbins, The turn of the century heart of Raiders Offensive line

Barrett Robbins, the turn-of-the-century heart of the Oakland Raiders' offensive line, who played with the team in Super Bowl XXXVII. 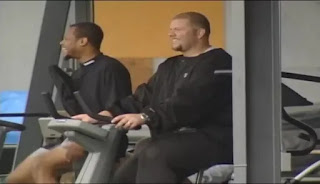 Barrett Robbins, the turn-of-the-century heart of the Oakland Raiders' offensive line, who played with the team in Super Bowl XXXVII and then fell to his own demons.

Barrett Glenn Robbins was born on August 26, 1973 in Houston. He grew up in the Sharpstown metropolitan area, once a model of urban planning, and graduated from high school there. Without any special problems and merit, he overcame the next step on the way to the NFL - Texas Christian University. In 1995, the Raiders drafted Robbins in the second round.

After spending a season behind seasoned Dan Turk, Barrett became Oakland's starting center in 1996 - just the fifth in nearly forty years of franchise history. Even then, the first signs of impending problems appeared: before the match with Denver, Robbins wandered around the hotel in a state of prostration, found it difficult to navigate in space and was hospitalized. However, from 1996 to 2000, he played 78 matches in the Raiders' starting lineup.

In 2000, Oakland had an excellent regular season, won the AFC Western Division and confidently passed Miami in the first round of the playoffs. Largely due to the excellent play of the offensive line led by Robbins, the team's attack ranked third in the league in terms of performance. Ahead was the conference final against Ravens, when another bell rang: a week before the match, Barrett disappeared. They could not find him, he appeared at the club's location a day before the kick-off and even entered the field. The Raiders lost 3-16 in that game, stopping just a step away from the Super Bowl. A year later, the team reached the playoffs again, but lost to the Patriots 13-16 in the divisional round. The New England Patriots team then won their first trophy, beginning the Tom Brady and Bill Belichick dynasty. The match itself was remembered for the episode with the failed fumble of the Patriots quarterback,

In 2002, Oakland finally covered the entire distance to the decisive match: 11-5 in the regular season, victories over the Jets and Titans in the playoffs. Buccaneers became the rival in the decisive match. The day before the game, Robbins disappeared again and only appeared at night, while hardly knowing where he was. Raiders owner Al Davis pushed for Barrett to play, but head coach Bill Callahan decided not to put his main center in the lineup. Adam Treu went to the match. The final ended for Oakland with a 21-48 defeat. Robbins' wife later revealed that he skipped his medication and left for Mexico the day before the Super Bowl to celebrate because he thought the Raiders had already won the trophy. Barrett was hospitalized, he spent about a month in the clinic, where he was diagnosed with bipolar disorder. In 2003 he was able to return to the squad and played in nine matches. In the off-season, Robbins' surname surfaced in connection with an investigation into the activities of the BALCO laboratory. In the summer of 2004, he was expelled after testing positive for steroids.

After football ended in his life, Barrett's problems worsened. On Christmas Day in 2004, he got into a fight at a hotel in San Francisco, and in January of the following year he got into a fight with police officers in Miami Beach. He was sentenced to five years of probation and compulsory treatment. Robbins spent the next several years in various rehabilitation centers, struggling with alcohol and drug addiction. He himself, in an interview with HBO, said that when he was a player, he tried to deal with mood swings with the help of cocaine, marijuana, steroids and alcohol.

In 2010, he was arrested in Dallas after drugs were found in his car. Robbins was sentenced to five years in prison, of which he served one and a half. Later, he was again sent to compulsory treatment, which did not bring results. In December 2018, Barrett was detained while driving a car with stolen license plates and cocaine in the cabin and was again behind bars. Robbins' story has led to a rethinking of the psychological problems of players in many clubs in the league. Unfortunately, he himself did not receive help when he needed it ...