On August 14, 1959, a meeting of the founders of the new football league, a little later called the American one, took place. As a result, it was decided that the first teams of the organization would be based in New York, Dallas, Los Angeles, Minneapolis, Denver and Houston.
Roy Williams, formerly Dallas Cowboys and Cincinnati Bengals safety, five-time Pro Bowl member, All-Pro team member following the results of the 2003 season, winner of the student national championship with Oklahoma. 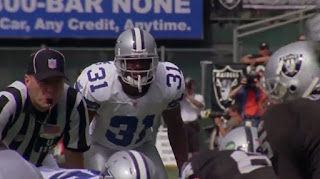 Roy Lee Williams was born on August 14, 1980 in Redwood City, a city in the north of the San Francisco Bay Area. He graduated from James Logan High School, where he played as quarterback, receiver and d-back. Roy's further path lay in Oklahoma, to one of the best college football coaches of the early 2000s, Bob Stoops.

With Sooners Williams played three seasons, from 1999 to 2001. He was one of the key players in the 2000 championship team: then Oklahoma passed the season unbeaten, beat Kansas State in the Big-12 conference finals, and was stronger than Florida State in the decisive game of the season. Roy set a d-back program record that season with twelve tackles with a loss of yards. No less bright, he spent his last season for the team.

In 2001, Williams won the Bronco Nagurski Trophy for Defender and the Jim Thorpe Award for Best College Football D-Back. One of the highlights of his career was the episode at the end of the Shootout on the Red River on October 6, 2001: with the score of 7-3 in favor of Oklahoma, the Longhorns started the drive from their five yards, Roy attacked Texas quarterback Chris Simms, the ball flew into the hands of linebacker Sooners Teddy Lehman, who cemented his team's victory. In memory of this rally, a commemorative plaque was installed on one of the buildings of the sports complex of the University of Oklahoma.

In the 2002 Draft, Williams was picked by Dallas as a joint eighth overall pick. Formally, he held a free safety position, but often changed positions with his partner Darren Woodson, played nickelback and dimbek. Roy became one of the league's most notable debutants in his first season, finishing second in the rookie of the year poll. In 2003, he received the first of five consecutive invitations to Pro Bowl and made a notable contribution to Dallas's first playoff in several years.

Williams was distinguished by his tough game. In 2004, after meeting him, four opposing players went on sick leave, and the league imposed a ban on grabs by the collar - a rule named after Roy Williams. He himself continued to use this technique from time to time, for which he was criticized by cowboys partners Terrell Owens and Patrick Creighton, and was also disqualified. At the same time, Roy remained one of the brightest and most effective defenders in the league. His Dallas career ended in 2008 when he broke the same arm twice during the championship. He was expelled from the team at his own request. Williams spent two more years in Cincinnati, having also missed a significant portion of matches due to injury.

Roy announced his retirement in August 2011. He spent nine years in the league, played 114 games, made 596 tackles and 20 steals. Almost immediately after that, he began working as a commentator at the Oklahoma games, he was often seen with a microphone at the edge of the field.

Williams has his own charitable foundation dedicated to supporting single mothers. He is also in business: Roy is the founder and co-owner of a company providing services for the safety of oil and gas production.