Daniel Jones will play his second NFL season 2020 with New York Giants, Jones show a great per performance in training camp as a quarterback and his team mates expect alot from him this season 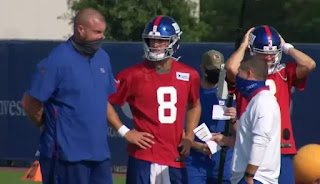 Daniel Jones will soon be at the stadium for his second NFL season. He's gotten bigger, he's stronger, and by all accounts he will improve in all aspects of the game this season.

These words sound like music to Giants fans. Jones in all its glory is what the team needs to meet after six unsuccessful seasons of the last seven.

Jones, 23, had a good rookie season, throwing 3,027 yards and 24 touchdowns in 12 games at the start. But this is not enough to enter the playoffs. Jones is the leader in the league in terms of the number of fumbles - 18 (11 led to a loss), so Jones needs to work on mistakes. The team needs him to move from a "good starting quarterback" to a "winning quarterback"

That's why Jones has been active this offseason, despite the restrictions due to the coronavirus pandemic, building muscle and working on deficiencies in his game.

"Obviously he's the kind of guy who wasted no time during the pandemic," said Giants head coach Joe Judge. "He made the most of his time and worked as efficiently as possible using the resources available under the constraints."

The changes in Jones' physical condition are hard to miss, even judging by the photos from the team's first training sessions. Of course, no one will confuse Jones with Saquon Barkley, but judging by the photo in which the quarterback froze after throwing his left foot forward, he was working on the leg muscles that cannot be ignored.

“From an athletic point of view, the changes are visible,” said Jason Benguche, one of the Jet Performance Labs executives who trained Jones for 10 weeks during the pandemic. “His legs are definitely bigger, stronger. And at the same time, it became faster and explosive. "

“He's accurate. He shaped his body, ”said Anthony Boone, a QB Country North Carolina mentor who worked with Jones this spring. Boone later added, "I think he will shock the league and play an important role this year for the Giants."

Work began a few weeks after the end of the 2019 season. Jones trained with quarterback coach David Morris and then with his former college coach David Cutcliffe. Jones even brought some of the Giants teammates to the field in Duke for training just days after the SuperBowl LIV in Miami.

This was just the beginning. Jones spent time working with Mickey Brueckner of QB Country New Jersey and throwing the ball to teammates, including receiver Sterling Shepard and running back Barkley, until things came to a standstill due to the pandemic. But even that couldn't slow down the pace that the 6th overroll of the 2019 draft picked for itself. Jones continued to work from home in Charlotte, North Carolina when everything in the country was closed. The league rookie, receiving a seven-figure salary, returned to life in his childhood home and trained at the same intensity as before the pandemic, trying to rise to a higher level in the QB rankings. He worked there until the restrictions of the pandemic eased and it was possible to move around the country.

After Jones worked in the field up to four days a week, mostly with a group that included his college mates PJ Walker (now with the Panthers) and Quentin Harris and Reciver Maurice Harris (formerly Saints), Sam Mobley of XFL and also former high school teammate Melvin and recent South Carolina retired Jalen Brooks. A temporary training camp was built on this, which was intentionally kept small for safety reasons during the pandemic. Jones also worked in the gym up to four days a week with a group that regularly included Olsen and A.J. Klein of Buffalo Bills.

Not only has he been building muscle this summer, he has also paid particular attention to continuing to work on fixing bugs, not just for Jones, but for the entire Giants team. Judge said he will put a lot of effort and resources into every workout to strengthen the off-line. Despite the fact that in 2020 there will be no familiar training camp.

“You cannot focus on anything if you don’t devote resources to it,” Judge said. "In football practice, your resource is time."

Holding the ball was also a priority for Jones. That's why he dedicated his most valuable resource this offseason to make sure he comes back this year better than he did last.
Not the best but still good.