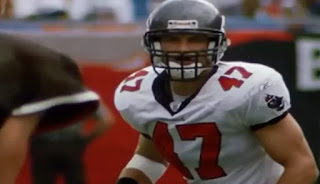 John Terrence Lynch was born on September 25, 1971 in Hinsdale, a western suburb of Chicago. His father, John Sr., was once drafted by Pittsburgh Steelers, never played professionally due to a knee injury, but made a successful radio career and is now president of the San Diego broadcaster.

Lynch also graduated from school in San Diego, then entered Stanford University. He was the star of the college baseball team, drafted by the Miami Marlins in 1992 and John was seriously considering leaving. Stanford's new head coach, Bill Walsh, dissuaded him. However, he still played two seasons at the Marlins farm club. Lynch began his football career as a reserve quarterback, and in the third year he retrained in safety.

John was selected by Tampa Bay Buccaneers in the 1993 NFL Draft. He began his career in the NFL as a member of special teams, from time to time replacing the more experienced Marty Carter. Strong safety Lynch was the starting point for the 1995 season. He was particularly successful against Minnesota Vikings, in which he made eleven grabs, knocked two passes and intercepted Warren Moon's two passes. In the 1997 season, he played for the first time in the playoffs, and in 1999 he received his first invitation to Pro Bowl in his career. In the 2002 season, John made it to Super Bowl XXXVII with Buccaneers and won it. He left Tampa Bay in the spring of 2004: the club was clearing a place under the salary cap, Lynch himself proposed to review his contract and reduce the amount, but the front office rejected this option.

He signed with Denver Broncos and played 60 regular season matches in four seasons. In 2006 and 2007, Lynch was one of the captains of the Broncos. He was also invited to Probowl in each of these four seasons, bringing his career total to nine. John left Broncos in July 2008. Before the start of the new championship, he signed a one-year contract with the Patriots, but was expelled before the start. Lynch remained a free agent for almost three months and decided to retire in November. In total, he spent fifteen seasons in the league. John is now a member of the Tampa Bay Buccaneers Ring of Honor and the Denver Broncos Ring of Fame.

In November 2008, Lynch joined the Fox Sports commentator team and has been in the industry for nearly a decade. In January 2017, he was named general manager of San Francisco 49ers. Already with him, head coach Kyle Shanahan and quarterback Jimmy Garoppolo came to the team. For the 2019 season, 49ers made it to the Super Bowl, and John Lynch received the Football Journalists Association of America's Function of the Year award.