The Super Bowl 2023 will take place on the night of February 12-13 at State Farm Stadium in Glendale, Arizona. The game begins at 6:30 P.M. ET.
Home
Denver Broncos
NFL

Denver Broncos OLB Von Miller suffered ankle injury that will prevent him from playing this season. 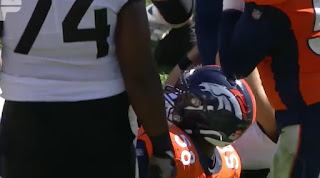 On Tuesday Broncos practice, von miller suffered ankle injury, per sources, NFL Network. They are fearing that this injury may be season ending for miller. They called it "a freak" injury and his team still evaluating MRI now.

Obviously a huge blow to the denver broncos and nfl as a whole, obviously von Miller is one of the best players in the entire league and to lose a player in his caliber would be a massive lose.

Denver Broncos OLB Von Miller  is expected to need surgery that is likely to end his season.

Broncos were practicing indoors today due to the blizzard in Colorado; they weren’t even in pads, they were practicing in shells. And near the end of practice Von Miller suffered the injury that now threatens to end his season. https://t.co/1gf8DEhK0e
— Adam Schefter (@AdamSchefter) September 9, 2020


He injured a tendon in his ankle on the last play of practice on Tuesday.

Broncos’ OLB Von Miller injured a tendon in his ankle on the last play of practice today, and he is expected to need surgery that is likely to end his season, league source tells ESPN.
— Adam Schefter (@AdamSchefter) September 9, 2020


Denver indicates that Miller will seek a second opinion before undergoing surgery, and the doctor he will seek is Robert Anderson, who has his office in Green Bay.


The Broncos, above all, do not know if they can count on Bradley Chubb for the game on Monday Night, as he continues to recover from the rupture of the anterior cruciate ligament suffered the previous year.

Given the imminent absence of Von Miller, it must be remembered that his alternates are Malik Reed and Jeremiah Attaochu.
Not the best but still good.