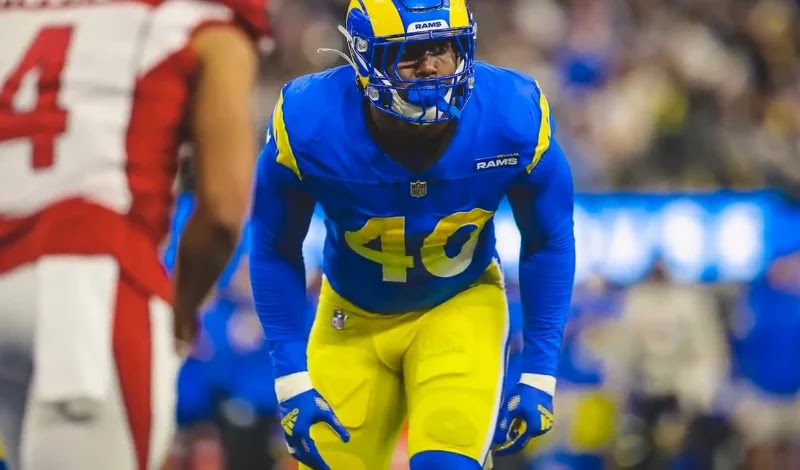 Los Angeles Rams outside linebacker Vonnie B'Vsean Miller Jr. was selected second overall in the 2011 NFL Draft by the Denver Broncos. Here's the 10 Facts You Didn't Know About Von Miller.

10. Miller was born in Dallas, Texas, to parents Von and Gloria Miller.

His parents, who were both athletes in high school and college, own a power supply business. He has a younger brother named Vinsynzie “Vins.”

In track and field, Miller competed in events such as the 110m hurdles, triple jump, and javelin throw.

9. He was considered a four-star recruit, and he was ranked as the 15th-best weakside defensive end in the nation in 2007.

He chose Texas A&M over offers from Florida, Ole Miss, Oklahoma, and Texas Tech. He played for the Texas A&M Aggies football team from 2007 to 2010. He weighed 220 pounds during his freshman year.

8. In the spring of 2008, newly hired head coach Mike Sherman was discouraged by Miller's habits of skipping class and failing to produce during practice.

Sherman decided to suspend Miller for that spring. Miller was disappointed, and he considered transferring, but upon his father’s insistence, he stayed. Miller then adopted a more serious attitude.

7. As a junior in 2009, he adopted the role of the jack position, a defensive end/linebacker hybrid, which allowed him to utilize his pass-rushing abilities.

He enjoyed a breakout season for the Aggies, leading the nation in sacks with 17 and ranking fourth in the nation with 21 tackles for loss.

He became the first Aggie to be named a first-team All-American since Jason Webster in 1999. Then-Aggies defensive coordinator Joe Kines compared Miller to the late Derrick Thomas. Miller then studied and watched film of Thomas to familiarize himself with his game.

As a senior, he won the Butkus Award as the nation’s top linebacker. He graduated with a degree in poultry science and today, he operates his own farm, raising chickens in his spare time.

6. Miller, who likely would have been a second-round pick in the 2010 NFL Draft had he passed on his senior season, entered the 2011 NFL Draft regarded as one of the best 3-4 outside linebackers available.

He was projected to be a top-5 pick by notable draft evaluators. At the 2011 Senior Bowl, he was the Defensive MVP. He was named the Super Bowl 50 MVP with Denver Broncos.

On July 28, 2011, Miller officially signed with the Denver Broncos. He wears No. 58 in honor of Derrick Thomas, his favorite football player.

4. On March 8, 2016, Miller was announced as one of the celebrities who would compete on season 22 of “Dancing with the Stars.”

He was partnered with professional dancer Witney Carson. On May 2, 2016, during a double elimination, Miller and Carson were eliminated, and they finished the competition in eighth place.

3. In July 2013, ESPN reported that he had been suspended six games for violating league policy, pending appeal.

He tweeted that he did “nothing wrong.” In August 2013, he lost the appeal and was suspended for six games.

The six-game suspension arose after the NFL learned that he attempted to cheat a drug test.

In August 2013, he was arrested on a failure to appear warrant for driving-related charges in October 2012.

In September 2013, he was cited for speeding and driving with a suspended license in Arapahoe County, Colorado.

2. In June 2016, Miller made a sex tape with Elizabeth Ruiz, an aspiring model/actress, while vacationing in Cancun.

He was aware that Ruiz was filming the moment, but he asked her to keep it private. At a later date, he asked her to delete it to which she replied with “Gotcha.” He said Ruiz attempted to extort him for $2.5 million to stop her from releasing the tape.

In September 2016, Miller’s representatives were contacted, and they were told that Ruiz wanted to distribute the sex tape and become “the next Kim Kardashian.”

Miller filed a suit with a Los Angeles County Superior Court to block the video from being released, and Ruiz was later ordered to hand over the tape.

1. In 2012, he teamed up with Ubisoft, makers of the video game, “The Hip Hop Dance Experience”, to create his very own sack celebration dance called “The DeSoto Shuffle” that was inspired by the video game.

Each time he performed the dance during a game, Ubisoft made a charitable donation to his foundation, Von’s Vision, which is devoted to providing eye care and glasses to underprivileged children.

That’s all 10 Facts You Didn't Know About Von Miller, tell us if you think Von Miller is a better defensive player than J.J. Watt!