The Super Bowl 2023 will take place on the night of February 12-13 at State Farm Stadium in Glendale, Arizona. The game begins at 6:30 P.M. ET.
Home
NFL
Seattle Seahawks

Today we celebrate birthday of the Seahawks retired receiver Doug Baldwin, Super Bowl Winner, left behind him a great History in NFL. 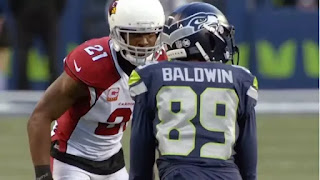 In 1980, New York Jets quarterback Richard Todd set a league record with 42 assists in a single match. This achievement remained the most significant in the career of an Alabama graduate, and the record itself was later updated several times and now belongs to Drew Bledsoe and Jared Goff (45 accurate passes in one game).

On 21 September 1982, a players' strike began, the main demand of which was the introduction of a pay scale based on league earnings. The union sought to ensure that 55% of the profits went to the players. The players went on strike for 57 days. The TV gap was filled with reruns of old matches, CBS began broadcasting NCAA Division III games, and NBC broadcast the Canadian League, which had terrible ratings. The strike ended with the fact that the players themselves began to conflict with the leadership of the union, and its leader Ed Garvey resigned. The regular season was reduced to nine matches, and the playoffs were expanded to 16 teams. Under the new collective bargaining agreement, players were given a salary increase for the offseason, and severance pay and bonuses were introduced based on the number of years they spent in the NFL.

Douglas Dewayne Baldwin was born on September 21, 1988 in Gulf Breeze, Florida. As a child, one of his teammates was Alfred Morris, the future Washington and Dallas running back. Doug also successfully went in for track and field athletics, participated in competitions in long and high jump. After high school, he entered Stanford University, where he played for four years under the direction of Jim Harbaugh. In college, Baldwin took the lead only last season, becoming the best on the team with 857 receiving yards.

He was not picked by any of the teams in the 2011 Draft and later ended up in Seattle, signing as an undrafted free agent. Doug made his first touchdown in the NFL in his first week against San Francisco 49ers, which was by then led by Jim Harbaugh, who knew him well. In his debut season, Baldwin became the Seahawks' best wide receiver in terms of receptions and yards. For the first time since 1970, when the AFL and NFL merged, an undrafted rookie was the leader of his team on those two metrics. In the 2013 season, Doug won Super Bowl XLVIII with the team: in the decisive game against Denver, he scored 66 yards with a touchdown, becoming the most productive receiver of the Seahawks. A year later, the team was close to the second consecutive title, but lost to the Patriots. Doug scored a touchdown in this game as well.

The last in his career was the 2018 season. Baldwin played in thirteen regular season games, but suffered several injuries from which he could not recover. In early May 2019, Seahawks was expelled from the player. Three days later, Doug announced the end of the performances. He now lives in Seattle, owns an investment firm, and acts as a financial advisor. Baldwin also sits on the board of directors of Valor Worldwide. Another area of ​​his activities is the organization 'Players Coalition', which advocates reforms in the field of education and criminal law.