Why WFT not trade Smith before it's too late?

Alex Smith starting QB at Pro Bowl, eventually. Washington Football team could save $ 13.6 million in 2021 simply by dropping him after this season. 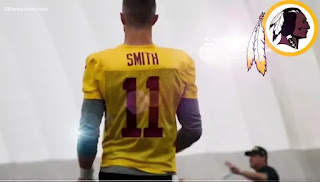 Obviously WFT is Dwayne Haskins Jr team. As the Redskins National Assembly knows, Ron Rivera loves competition, so if he can foresee something, he will. Rivera named Haskins QB # 1 for the team, but when asked about the opportunity to pitch Alex Smith's QB as the starter for the first week against Philadelphia, he said, "Yes, if need be. I'll feel very comfortable with him."

Plus, if Smith is in good shape, chances are someone will be interested in his availability for the 2021 season. He's a proven playoff fighter, starting QB at Pro Bowl, eventually. Washington Football team could save roughly $ 13.6 million in 2021 simply by dropping Alex from the squad after this season, but the club will still have to pay him nearly $ 16 million in the 2021-2022 season. Why not trade Smith before it's too late?

Without pre-season games, he was seen on the field in the current closed camp in Washington. Ron Rivera is certainly an authority, but hardly anyone will change their quarterback only after the words "I will be comfortable with him." Two years outside of football, and even with such a contract. It is unlikely that you will exchange it for something more expensive than for Thank you.

Lets talk Alex Smith. Can confirm Washington is keeping the QB on its initial 53-man roster - and plans on leaving him there. No IR, according to a source familiar with the situation. This allows him to practice with the team. Unreal.
— Ben Standig (@BenStandig) September 5, 2020