Atlanta Falcons offensive line looks good overall, but the defense, which concedes 34.5 points per game on average, is ranked second to last in NFL.

The Falcons started at 0-4 and are desperate for fresh blood. The season is almost buried now, and Dan Quinn is choosing the right words to convince Falcons owner Arthur Blank to give him another chance. Quinn who served as a defensive coordinator in Seattle managed to keep his job last year, after 1-7 in the first half of the regular season. 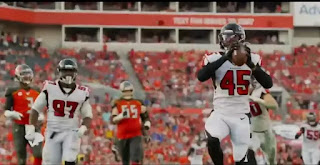 Atlanta Falcons offensive line looks good overall, but the defense, which concedes 34.5 points per game on average, is ranked second to last in the league, beating only Dallas. Perhaps the reason is that the Falcons played against the three highest scoring teams in the NFL: Cowboys, Seahawks and Green Bay Packers. Perhaps this defense requires replenishment of talented youth, although there are those around whom you can build a unit. The problem is that Atlanta Falcons defensive leaders are injury-prone players, and the depth of the squad is not enough to maintain a consistent level throughout the season.

Even setting aside a possible change in coach or even general manager, the Falcons will find themselves in a tough spot for the foreseeable future. QB Matt Ryan with his contract will definitely spend the next season at the club. WR Julio Jones in 2021 will cost 23 million, and according to forecasts at the moment, Atlanta exceeds the salary ceiling by 25 million. The 6 best players together will eat 136 million! Obviously, the bet was made to win here and now, but it did not play.

In the meantime, it can be stated that the next Falcons Draft would be wise to devote to solving the problems of defense, getting the most out of every possible pick.

If Atlanta really goes into a deep restructuring, then the bet should be placed on the players with the maximum potential. Our forecast is based on the fact that Falcons will be selected in the top 10, since after the start of 0-4 in the last 15 years, only one team has won more than half of the matches (out of 46 possible).

Rousseau fully fits these conditions. He is tall, physically powerful, and perfectly built for his position. Gregory is capable of destroying an opponent's envelope and showed it in 2019, making 15.5 sacks in his first full season. His potential is obvious and it's hard to imagine that he will drop below the 10th pick in the draft.

We can say with confidence that he is a raw player, and besides, he refused to perform in 2020 due to COVID-19. In fact, Rousseau did not even play 600 snaps in his Miami career. However, we emphasize again, this is an extremely talented pass rusher, although at school he entered the field as a quarterback and receiver. If the Falcons choose him and give him time to develop, the team will eventually get a star like Jason Pierre-Paul in his best shape.

While Atlanta invested money in Dante Fowler, Charles Harris, who moved from the Dolphins, also shows himself well. Nevertheless, it would be wrong to ignore the need for a pass rush, and DE Takkarist McKinley's contract expires and is unlikely to be extended - the Falcons have already refused the 5th year option. Another argument: since 2018, Atlanta has ranked in the second half of the league teams in terms of the number of sacks, pressure and hits on the quarterback.

Safety contracts for Keanu Neil, Damontae Kazee and Ricardo Allen are expiring, all of them have suffered injuries of varying severity. It is highly likely that at least one of them will leave Atlanta.

The Falcons' defensive scheme looks suitable for secondary playmakers, as indirectly confirmed by 14 interceptions in the last 20 games. Why not choose a safety, one of the best college football players in this situation?

Cisco is not without drawbacks, first of all, these are mistakes during grabs, but he has a natural instinct that cannot be trained. In 24 appearances for Syracuse, he made 13 interceptions and no other college football defensive back can match him in productivity. André has no problems with athleticism, even despite not the most noticeable dimensions. On the combine before the draft, he will be among the best safety.

He's now in his third college season and hasn't been a redshert yet, but he's determined to get into the draft at the earliest opportunity. Preseason mock drafts sent Cisco into the second or third round, so our conditional "mid draft" here is somewhat wider.

In his face, the Falcons can get an aggressive defender who compensates for several mistakes with other qualities. Technique can be worked out, but natural instinct is not.

Atlanta traded their 7th round pick for Harris, which looks fully justified, but the team is expected to receive three compensation picks on Day 3 of the draft. It would be wise here to focus on picking the most talented of the remaining players rather than positioning.

But suppose the office decides to add even more power to the inside of the defense front, in company with the Defense tackle Grady Jarrett. Tyeler Davison and John Cominsky, who do not look like starting line-ups, are getting a lot of snaps now. Rookie Marlon Davidson is just adapting in the league. So let's put on a big and powerful nose-tackle that can attack the middle passes and support his linemates.

Quinton Bohanna meets all these requirements. For Kentucky, he had some great games and could have entered the draft in the spring, but realizing that he was unlikely to be selected before the third day, he decided to stay in college for another season. It can be taken in the 5th round. Bohanna is not a player who will play 50-60 Snaps per match or become an important factor in defense against the pass. But in the early downs, due to his strength, he is able to untie Jarrett's hands so that he can act more productively.