We talk about the Titans vs Steelers and immediately remember the running back Derrick Henry, who terrifies the entire League.

COVID-19 makes significant changes in the lives of many throughout the year and the NFL is no exception. This week we are going to see a game that should have been played in week 4. Perhaps this happened even for the better, since the delay made it clear that these teams deservedly have the status of invincible at the moment. But before the game of the fourth week it was not so obvious, because Tennessee Titans, although they went without defeat, but all these victories were “valid”, with the advantage of only a field-year and over not the strongest opponents (“Denver Broncos”, Jacksonville Jaguars “and” Minnesota Vikings”). The same could be safely said about Pittsburgh Steelers. But after a forced week of rest, the teams managed to show that they can easily defeat opponents claiming high positions in the current championship (Buffalo Bills and Cleveland Browns). 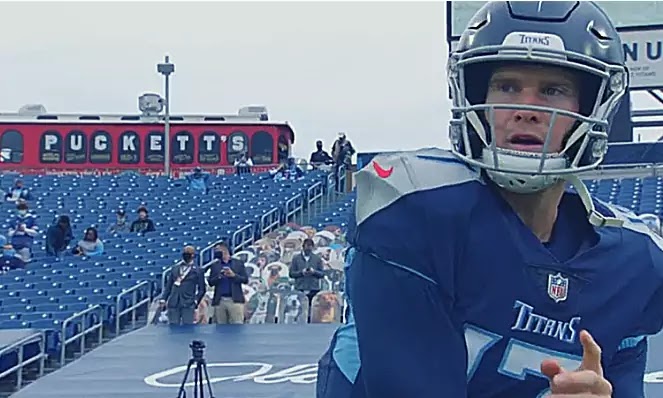 We talk about the Titans and immediately remember the running back Derrick Henry, who terrifies the entire League. For all his physical capabilities and the speed that he shows, this is a real bulldozer, on which the engine from “Ferrari” was installed (last year, of course; this year's engine was clearly stuck to the “Jets”)! He easily breaks through the defensive orders of his rivals, and then runs away from them at full speed. Occasionally, as part of his races, King Henry competes in defensive back throwing competitions, where he deservedly is the champion (everyone remembers the recent achievement in the form of throwing Bills corner back Josh Norman over 3 yards). As a result, for the second year in a row, he is the best running back in the League (in 5 games this season, he has already managed to make 588 yards, of which 365 were recruited after contact).

How to cope with such a “monster” will be the main headache for the defense of Pittsburgh Steelers. Basically, in the last round, they already showed that they can cope with such tasks successfully when they allowed the previously unstoppable Cleveland Browns to gain only 75 yards.

In order to successfully pass the test this week, the Steelers' defense must clearly and timely close the gaps on the scrimmage line so as not to give direct passes to Henry. This will force him to change direction (which, given Derrick's size, is not a strong point), and this, in turn, will deprive him of his most formidable weapon — speed.

To facilitate the implementation of this plan should not be the most pleasant news from the camp of “Titans”, which came this week. Their core is the left tackle, who has already been selected to the Pro Bowl three times, Taylor Lewan tore the crosses and will now miss the rest of the season. He should be replaced by veteran Ty Sambrailo, who was signed from the Atlanta Falcons literally this off season, and in his 6 years in the League has already played in three positions in the offensive line (left and right tackles and right guard).

But whoever came out in the offensive line from the left, this will definitely have an effect on the game, because when Lewan was in the ranks, it was in his direction for the most part that the removal was directed (almost 40% of all attempts) and the effectiveness of this removal was the greatest (when moving to the left, the number of yards per attempt is 3.9 more harmful, while when moving to the right it is only 2.9).

All this prompts the idea that the effectiveness of the Titans' end-game may be significantly reduced and the main burden will fall on the shoulders of their quarterback Ryan Tannehill and the passing offense. Which I think they can handle.

After all, Ryan knows how to make decisions quickly and efficiently and accurately send the ball to the chosen receiver. And there is a feeling that the calendar specially prepared the Titans and their quarterback for the confrontation with Blitzburg.

Over the past three weeks, opponents (Vikings, Bills and Houston Texans) have actively tried to blitz Tennehill (40% of all passing attempts), but the quality of the quarterback's play has not dropped at all (70% of his passes found their target !!!) ... Yes, it can be argued that the Steelers are the MOST aggressive team in the League in terms of blitz, that the quality of their players is much higher, but I think that Ryan will be able to handle this load much better than Baker Mayfield tried to do in the last match.

Another factor that plays positively for Titans is the unpredictability of their passing Offense. They do not have a clear tie for one receiver, closing which, you completely break the game plan. In every game of the current championship, someone new came to the fore: tight-end Anthony Firsker in the last match, receiver A.J. Brown in week five, receiver Caliph Raymond against Vikings, etc. Maybe in this match the main load will fall on tight-end John Smith and receiver Corey Davis, who will terrorize the Steelers' center of defense weakened by blitz. We'll see ...

But what might a guest game plan look like? Given the Titans' problems versus the clearance, this could be the main bet on the match. James Connor can not only effectively bring in yards to his team, but also keep his counterpart Derrick Henry starved on the sidelines. It will also allow the guests to avoid losses in the offense, in which Titans's defense is strong (in the first 5 weeks, it issued 6 interceptions and forced 5 fumbles).

On the pass, I expect, finally, a breakthrough in the game of JuJu Smith-Schuster, who will be opposed for the slot by the first year from LSU Kristian Fulton, and which he should easily cope with. And let's not forget, of course, about Mapletron Chase Claypool, who has already legitimately become an important link in the Steelers' offense, and is the leader in reception yards in his team (335 yards). If in his first year a guy deserves such recognition, then he will have a very bright future in the League. 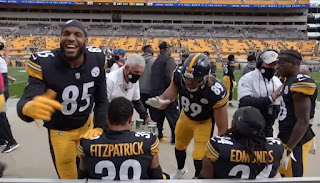 As a summary, we are facing a very exciting confrontation between truly equal rivals. Nevertheless, I am inclined to believe that the Titans will be able to be the first to stop the Blitzburg. This team seems very balanced to me! The most important thing for the receiver is to take the game into their own hands from the start of the match, to keep the lead, otherwise they will have to leave their favorite end-to-end game to pass. Oh yeah, well, so that Stephen Gostkowski was accurate, and not played like in the first week.