Denver thanks Ja'Wuan James, who was released with an uncertain future in the NFL. 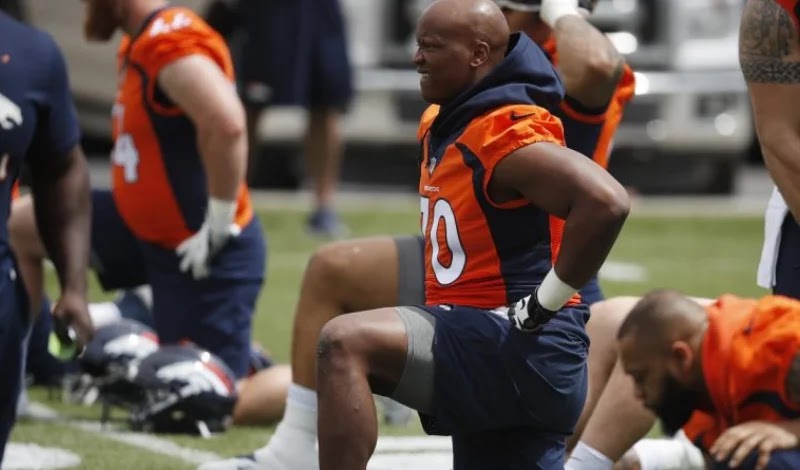 Denver thanks Ja'Wuan James, who was released with an uncertain future in the NFL.


The Denver Broncos decided to terminate their contractual relationship with the offensive lineman after signing two players, Cameron Fleming and Bobby Massie, to add depth to that unit.


James faces a complicated process, as he injured his Achilles tendon, which has already been repaired through surgery, while working on his physical conditioning outside the Broncos' facilities, a situation for which he was placed on the list of players with injuries not related to the practice of sports, which releases the team from the responsibility of covering the player's salary, as it is established in the collective bargaining agreement.


Denver thanks James after playing little with the team after signing for 4 years in 2019.


James was set to receive $10.58 million this season, a salary that will be fought by his agent, albeit a portion, now that the Broncos have thanked him.


James' stay with the Broncos was less than pleasant after signing a four-season, $51 million contract prior to the 2019 season. A knee injury limited him to participating in only three games in 2019 and in 2020 he opted out of the season for fear of COVID-19.


James will have to wait to see if he recovers to receive another opportunity in the NFL, something that looks complicated after a prolonged absence between opting out and this injury, which ended with Denver thanking him and a possible contract dispute looming.

Another case in Denver

The news of James' release comes on the same day that WR DaeSean Hamilton was confirmed to have suffered a hamstring injury, also from working out of the Broncos' facilities, which also leaves him in dangerous territory.


Hamilton was close to leaving the team in a trade, which was cut short by the injury.


Hamilton was considered to be traded to another team these days, but now his future is up in the air.


Because he suffered the injury while working out of the Broncos' facility, the team is not obligated to pay his salary, although his case and James' will be reviewed.
Covers everything about NFL, NFL Draft, NFL News and Rumors, Super Bowl, best NFL players in history, best NFL players, NFL Mock draft and more. YouTube TV NFL.