Etienne works as a receiver

Travis Etienne works with the receivers at the Jacksonville Jaguars' rookie minicamp. 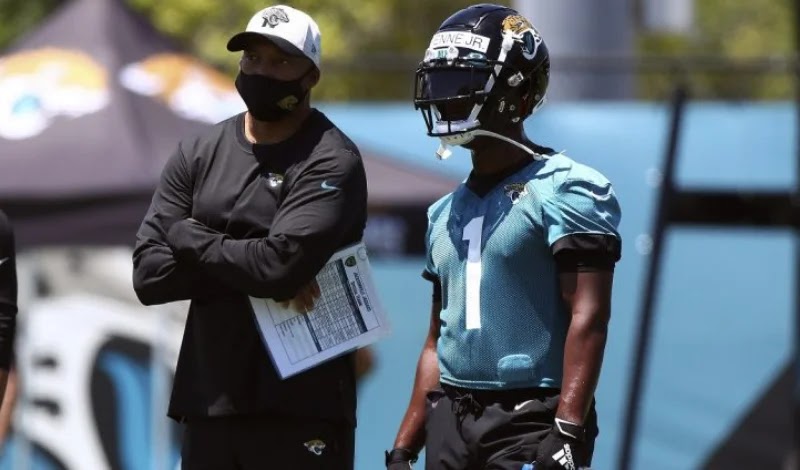 Urban Meyer approached him with the idea from the first day he arrived at the Jaguars' facility, and Etienne is comfortable in that position.


Travis Etienne works with the receivers at the Jacksonville Jaguars' rookie minicamp.


Etienne is not surprised by what is happening and is willing to work wherever he is put, as he knew of Urban Meyer's intentions from the first day he spoke with him after selecting him 25th overall in the 2021 Draft.


For the Jaguars, in a worst-case scenario, Etienne could only line up as a running back in obvious passing situations or third-down opportunities, or they could have him on the field at all times, lining him up from different positions.


"When I came in he took me into a meeting room and asked me how I felt about it, and I feel great. I feel like he's going to help me maximize my opportunities, maximize my skills. I think coach knows what he's doing," Etienne said at a press conference after the second day of the Jaguars' rookie camp.


For Etienne, working out of the receiver position could help him exploit his ability and outplay whoever is going to tag him one-on-one.


"I feel like I can create problems outside for the linebackers. We're just trying to get the best matchups to go out there and make plays and do what's best for the team."


This is Etienne's first approach to the Jaguars offense and the following preseason work will have to be closely watched to establish if this weekend was a matter of developing Etienne's skills to work on his receiving technique.


Meanwhile, the first overall selection in the 2021 Draft, quarterback Trevor Lawrence was already able to work with his teammates and is looking pretty good with his left shoulder, which he underwent surgery on a few weeks ago.
Covers everything about NFL, NFL Draft, NFL News and Rumors, Super Bowl, best NFL players in history, best NFL players, NFL Mock draft and more. YouTube TV NFL.