Jimmy Garoppolo is one of the best quarterbacks in the NFL, he played with Patriots and 49ers, 2 times Super Bowl championship.Here's The Top 10 Facts

Jimmy Garoppolo is one of the best quarterbacks in the NFL, he played with Patriots and 49ers, 2 times Super Bowl championship. Here's “The Top 10 Facts You Didn’t Know About Jimmy Garoppolo!” 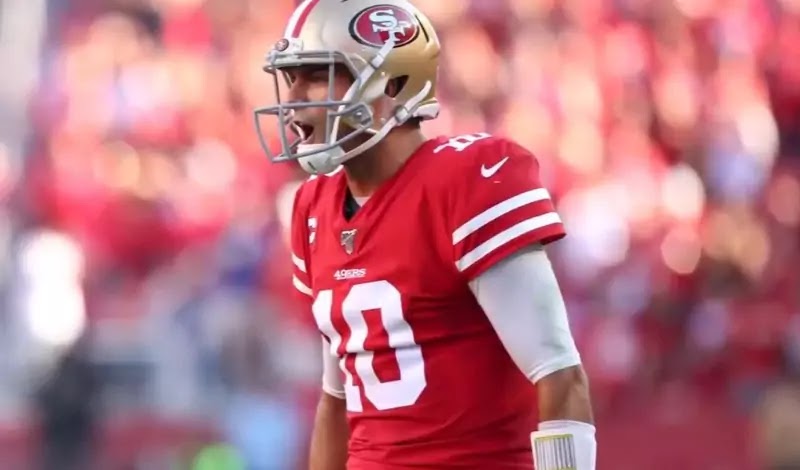 10. Jimmy Garoppolo has been a backup at every level of football.

He became famous as a backup for the legendary Tom Brady, one of his heroes, performing well on the occasions when Brady was suspended or otherwise unable to play. The life of a backup can be difficult, but Garoppolo was able to succeed because he has played backup at every level of football.

In junior high, he was not a starter from day one and was, in fact, a running back. His coaches had taken note of his arm and eventually gave him a chance when one of his teammates got injured. He excelled in the game and went on to play 19 games as quarterback during his junior and senior seasons.

Jimmy G was in the same position in college and in the NFL, getting one of his chances after the infamous ‘Deflategate’ scandal that left Tom Brady, his team’s starting quarterback, suspended.

9. Jimmy Garoppolo’s family had never been to New York before the draft.

It was an amazing and a surreal experience for the whole family, visiting the city for the first time and getting to meet some of the biggest names in the game.

He was not always a football player in his younger years. Growing up in the Chicago suburbs of Arlington Heights, he played soccer, basketball, and baseball. Despite his participation in baseball and soccer, he was always interested in football, a sport his parents forbade him from playing.

In his competitive and rebellious nature, he still found a way to play and push the boundaries. He would, for instance, bring a football to his soccer practice to play with.

When he played baseball in high school, he soon grew tired of being a pitcher, but still wanted to throw a ball. His passion for football eventually led him to the sport.

7. Jimmy Garoppolo chose to play for Eastern Illinois because of Bob Spoo.

When it came to making his final college decision, he had offers from different camps, including scholarships from Illinois State and Montana State. He ended up giving a verbal commitment to the Eastern Illinois University Panthers during his weekend recruiting visit after being impressed by head coach Bob Spoo and offensive coordinator Roy Wittke.

QB Jimmy Garoppolo has in the past been linked with Boston model Alexandra King, which he denied, despite photos showing them getting cozy with each other. After he allegedly broke up with King she made headlines when she seemed to celebrate his season-ending ACL injury in 2018 with a cryptic post with the word ‘Karma’ on her now deleted Instagram account.

Jimmy Garoppolo was the second player from Eastern Illinois University to ever win the award after Tony Romo, who won it in 2002 and went on to star in the NFL for the Dallas Cowboys.

4. Jimmy Garoppolo has struggled to shake off the injury-prone tag.

Even though he has only had two notable injuries, they have been big enough to warrant the injury-prone tag. In 2016, he suffered a torn ligament in his throwing shoulder in his second NFL start. In his 10th career start, he suffered a torn ACL in his left knee that ended his season.

These two injuries have had analysts place him under the injury-prone category, an association he has refuted several times in interviews.

He has had a rapid rise in the NFL, from being scouted as an underdog and being a backup for several years, to one of the highest-profile players in the league now. When he signed the record-breaking deal with the 49ers in 2018, many would have forgiven him for tooting his own horn, something that is not too uncommon in the NFL. He has however remained pretty low-key, thanks to his upbringing. Growing up as part of a middle-class Italian family in Chicago, his parents and brothers always kept him grounded and humble. He has carried this mentality all the way through high school, college, and into the NFL.

2. Jimmy Garoppolo has largely modeled his style of play after Tom Brady.

He might have been Brady’s understudy for several years, but it is no coincidence that he was signed to be his replacement. Garoppolo has always admired Brady’s style of play and modeled his style on the legendary quarterback’s moves. Jeff Christensen, one of his coaches as a teenager in high school, would always tell him to ‘be like Brady’. Christensen would bring a laptop full of Brady’s highlight videos to workouts and have Garoppolo try to imitate his moves.

That’s all “The Top 10 Facts You Didn’t Know About Jimmy Garoppolo!”, tell us who you think is currently playing better, Jimmy Garoppolo or Tom Brady?