Here's the top 10 Facts You Didn't Know About the Los Angeles Chargers Wide Receiver Keenan Allen, his years at college & NFL, his wife and family.

Keenan Allen is an American football player at the position of wide receiver for the Los Angeles Chargers. He was born on March 17, 1992 in Greensboro, North Carolina. Here's the 10 Facts You Didn't Know About Keenan Allen. 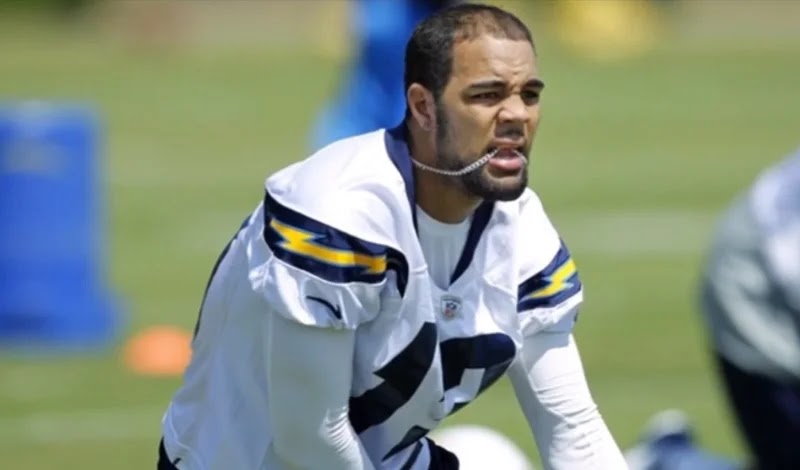 10. Allen isn’t the only member of his family to play football for the Cal Golden Bears.

His older half-brother, Zach Maynard, played for the Golden Bears from 2010 to 2012. Maynard was the team’s quarterback and starred for the team for two seasons. He threw 29 touchdowns over the course of two years and for more than 5,200 yards. Thanks  to Maynard playing at Cal, Allen joined the team to play as a wide receiver. After going undrafted in the NFL, Maynard played in the German Football League for the Hamburg Blue Devils. Maynard now  works for design company “Depth” in Los Angeles.

9. The 2021 season has seen the NFL step up its crack down on taunting.

This season has already seen Allen fined $10,300 for taunting the Dallas Cowboys. Prior to the NFL leveeing a fine against Allen, his taunting of the Cowboys led to a 15-yard penalty and the Chargers ended up losing the game. The good news for Allen is that he is in the second season of an $80 million-plus contract extension which was signed in 2020.

Allen now writes his own music. Piano is just one of Allen’s hobbies off the gridiron. His other hobbies include singing, golfing, playing basketball, bowling, playing cards, rollerblading, playing video games, cooking, and playing paintball.

After a stellar high school football career, Allen committed to the University of California, Berkeley, in 2010. At the time, Allen was the No. 10 college football recruit in 2010 in the United States. Although Allen is a wide receiver, he was the No. 1 safety recruit in the state  of North Carolina. Former Northern Guilford High School coach John Roscoe claims Allen was the best defensive back he has ever coached.

6. The Chargers player believes that fatherhood has made him a better wide receiver.

Allen cites maturity and accountability as  two attributes he learned from being a dad. Allen’s former teammates Philip Rivers and Antonio Gates helped the wide receiver adjust to family life. The wide receiver used to go out to clubs and casinos during the early stages of his career.

As he got older, Allen took up new hobbies  such as playing golf rather than going out to clubs or to gamble, which has helped keep his feet grounded and family together.

5. Keenan Allen entered the NFL Draft after playing three years at the University of California.

The wide receiver is Cal's all-time leader in catches with 205 receptions. He ranks third in the school's history with 2,570 receiving  yards, and is seventh with 17 touchdown catches. In 2011, he earned all-Pac-12 honors. Allen was one of Cal’s highest-profile players for some time and will be long remembered for his exploits in Berkeley.

Upon arrival in Indianapolis for the NFL Combine, Allen was red  flagged by the NFL’s drug test. High levels of water were detected in the wide receiver. It was  believed Allen had high levels of water in his system to cloud drug use. His draft status took  a hit due to the drug test which is likely one reason the Chargers were able to land him in the  third round. Although the drug test may have had some impact on Allen’s draft status, even before  the NFL Combine, some draft experts believed Allen would drop out of the first round due to  an old PCL injury and poor 40-yard dash time.

3. Allen has been in a committed relationship with Ciandra Monique since December of 2012.

The couple got engaged in May of 2017 by  their swimming pool as the wide receiver got down on one knee. Allen posted the video of the proposal on social media for the world to see. Ciandra is the mother of Allen’s two girls and a boy, Kaliyah, Kamari, and Kado.

2. Allen loves jewelry and routinely shows it off on social media.

Early in his NFL career, Allen got a custom grill  made featuring 300 diamonds. The gold-based grill features 3 karats worth of diamonds. Allen  paid around $10,000 for the custom mouthpiece. The grill was made by “A Image Jewelry.”

1. The Chargers plucked Keenan Allen out of the bargain bin of the 2013 NFL Draft.

Allen  was selected in the third round and the No. 76 draft pick overall. Before making a reception for the Chargers, Allen considered quitting the team and going back to school. Training camp  was difficult for Allen during his rookie season.

The Chargers had several top receivers already,  including Malcolm Floyd, Ronnie Brown, Danario Alexander, and Eddie Royal. Tight end Antonio Gates and running back Ryan Mathews were also already on the team. Allen struggled to break into  the team’s wide receiver rotation. He didn’t play a snap in the Chargers’ first game of 2013 and  was ready to quit the team and return to college.

Remarkably, the next week, Malcolm Floyd suffered a season-ending injury. It allowed Allen a chance to play. He hasn’t looked back since. In 2021,  Allen reached a new milestone by catching his 623rd career pass while playing in his 99th game.

Allen passed Antonio Brown’s 622 receptions in 100 games for the most catches by a player in NFL  history in their first 100 games. His LA Chargers jersey and receiver gloves were donated to the Pro Football Hall of Fame after he achieved this feat.

That’s all 10 Facts You Didn't Know About Keenan Allen, tell us who you think is the better route runner,  Keenan Allen or Davante Adams?