The Super Bowl 2023 will take place on the night of February 12-13 at State Farm Stadium in Glendale, Arizona. The game begins at 6:30 P.M. ET.
Home
Facts
Las Vegas Raiders

Darren Waller is an American Football Tight End, played college football at Georgia Tech and played with Las Vegas Raiders in the NFL. Here's the Top 10 Facts You Didn't Know About Darren Waller. 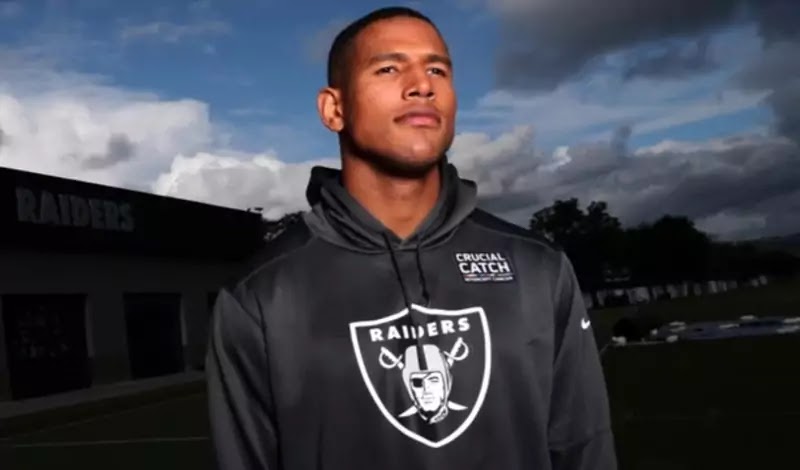 10. Waller had a long-term drug addiction that started at the age of 15 due to not fitting in at school.

The Raiders tight end was addicted to OxyContin and just a year after getting hooked on the deadly drug, began drinking alcohol. As Waller got older, he began using more drugs. He would spend $100 a day on pills and snort cocaine to get high.

His drug addiction didn’t stop him from graduating from Georgia Tech or being drafted by the Baltimore Ravens in 2015 in the sixth round. However, once the drug abuse was known by the league, he was banned for the first four games of the 2016 season after violating the NFL’s substance abuse policy. Next, Waller was suspended for a full year without pay for violating the NFL’s substance abuse policy for a second time in 2017. Waller then had his “come-to-Jesus moment” by overdosing in his car. A 34-day stint in rehab followed, allowing Waller to get clean and sober for the first time in about a decade.

The tight end earned his way back into the NFL as the Raiders signed him from the Ravens practice squad. The rest is history.

According to the latest reports, Waller is not in a relationship and remains tight lipped over any romantic relationships he has or has had previously.

Some fans and pundits allege Waller is gay and has not come out of the closet. Raiders teammate Carl Nassib came out as the first homosexual NFL player. Waller has been extremely supportive of Nassib and fan speculation alleges the tight end could be gay as well; but not ready to let the world know.

He is a rather memorable individual, but Raiders head coach Jon Gruden has a new nickname for the tight end nearly every week. Gruden loves nicknames and comes up with new monikers for all of his players. Some of the coach’s popular nicknames for Waller are “Big Drink”, “The Wall-Eye", and “Wally Baby”. Many of the nicknames are just random and don’t stick around from week to week. Waller is considered a prize signing by Gruden after joining from the Ravens practice squad in 2018.

He started the foundation to help young people avoid the same issues he experienced. The foundation’s mission statement is: “to equip youth to avoid and overcome addiction to drugs and alcohol and support youth and their families during their recovery and treatment journey.”

6. In 2022, Waller plans to fund drug and alcohol treatment for families who cannot afford it.

Waller plans to pay for the treatment himself. The Raiders player wants to use some of his wealth to give back to people suffering from addiction and co-occurring disorders. Waller is currently under contract with the Raiders making over $30 million for four years. With his experience with drugs and alcohol, there is a very good chance Waller will have a post-football career working with people to end addiction.

5. Waller was a high school standout as a safety and wide receiver.

In his senior season at North Cobb High School in Kennesaw, Georgia, he tallied 122 tackles playing as a defensive back. It looked likely he could become a defensive player rather than an offensive one in college, but he played wide receiver in college thanks to his height. At Georgia Tech, the Yellow Jackets played a three-carrier option system, which limited the number of receptions Waller made. He had just 26 receptions for 442 yards and six touchdowns in his final year of college. Still, he impressed NFL coaches and scouts. At the time, Waller was a wide receiver for the Yellow Jackets and didn’t convert into a tight end until later in his career.

4. Coming out of North Cobb High School, Waller was a three-star recruit in football.

3. According to Waller, he should have been kicked out of Georgia Tech due to his drug and alcohol abuse.

The college did not see it fit to kick him out, instead allowing him to remain on the football team and graduate. The Raiders tight end has been arrested on three occasions, but it wasn’t until he overdosed that he finally got the help he needed to kick his drug habit.

2. Music is near and dear to Waller’s heart.

It is music that helped him get over addiction after rehab and thrive in the NFL with the Raiders. The football player turned music producer has produced two music albums, “Better Call Wall” in 2017 and “Wall Street” in 2019. He goes by the name “D-Wall” when producing music. Waller’s love of music runs in the family. Jazz legend “Fats” Waller is the tight end’s great-grandfather.

1. During Waller’s NFL suspension, he had no way of making money from football.

To make ends meet, Waller got a job stocking shelves at a Sprouts Farmers Market in Smyrna, Georgia. Despite having a bachelor’s degree from Georgia Tech, he took on the humbling job at the supermarket hoping to get another chance in football. It was a long fall from where Waller had been and was about to go in the future.

In August of 2018, Waller rejoined the Ravens to play on the team’s practice squad. The Raiders signed Waller two months later and he ended up signing a big contract extension with the team in 2019.

That’s all 10 Facts You Didn't Know About Darren Waller, tell us who you think is better, Darren Waller or Travis Kelce?