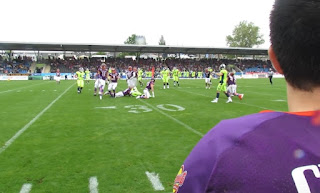 The meeting ended with a press conference at which it was announced that the European league teams will be based in Barcelona (Almogavares), Istanbul (Conquerors), Munich (Lions), Rome (Gladiators), Vienna (Lippizaners) and Berlin (Bears). The league was to consist of two divisions of three teams. Most likely, one of them would be representatives of the FRG and Austria, and the other would bring together representatives of the south of Europe. In the regular season, each of the clubs had to play two games with rivals from its division - at home and away. In the final, the division winners would meet. Unlike the NFL, the winner of the championship was to be determined by the results of two matches between the finalists.

According to information published at that time, the lineups could be replenished in three ways. First, each team was “tied” to one of the six NFL divisions, from which it could receive newcomers or reservists. For example, Barcelona was associated with the AFC West Division (looking ahead, it was in the capital of Catalonia in 1991 that an exhibition match between the Broncos and the Raiders took place).

Secondly, the owners of European teams could reach an agreement with individual players with whom local fans could identify themselves. There is information in the Italian Football League archive that the Gladiators had agreements with Italian-American football players: quarterback Dante Pastorini (Oilers), linebackers Nick Buoniconti (Dolphins) and Doug Buffon (Bears), center Tom Deleone (Browns) and guard Joe Sambi )

Thirdly, teams could sign contracts with European football players, which would serve as kickers and panthers. Adalbert Wetzel planned to attract one of the players of his team in Munich-1860, Bruno Beneck had good connections with Lazio. Also, each team received the right to sign the players of one of the colleges. According to archival documents, the Romans went to Notre Dame.

A copy of the contract concluded between the league and Bruno Benek, was preserved by the historian Fausto Batella. The league's official place of registration was Dallas. Its president was Bob Cap, and Texas lawyer Paul Thorpe was secretary general.

The charter of the league said: “The goal of the Intercontinental Football League is the introduction and development of American football as a sports and business industry in countries where there are currently no competitions. The league will initially operate on the territory of continental Europe and Asian Istanbul, hence the name - Intercontinental. ”

“The League intends to keep the game in its American form and add to it the rich traditions of those countries, the teams from which it is a part. To this end, the following paragraph was introduced into the Charter: official rules should be the same as in the United States with such changes that may be deemed appropriate for educating the fans, ”wrote Bob Cap.

Cap had some experience adapting socker rules to North American realities during his time at NASL. Now one can only guess what he meant by “expedient changes”. In all countries where the teams were to play, the metric system was used. Could they face a 4-centimeter situation? Could the rules of American football have generally adapted to an audience that grew up on a completely different game?

Of course, the possibility of free kicks was not considered. It is likely that the playing time would not be stopped, since football was criticized in Europe for its "slowness." In 1992, in Berlin, the Dolphins and the Broncos played the shortest match in history for precisely this reason. In addition, the European viewer is accustomed to the clock, counting the time from 00:00 to 90:00. In 1983, when one of the first NFL games took place in Europe, a countdown scoreboard was sent specially to London.

“The rules should definitely use American terminology. The midfielder in no way should have become a "halbspiler" or "median". Each game was supposed to begin with the national anthems of the competing teams. The owner of the field was responsible for placing the flags next to the banner of the Intercontinental Football League. The responsibilities of the host also included the organization of the show for the audience during a long break.

Income from each match was divided between the hosts and guests in a ratio of 60/40. Each of the teams had to pay 8% commission to the league. Before the start of the season, clubs made a "safety" contribution of $ 15 thousand. The league also received 15% of the amount of sponsorship agreements (Pan American was one of the sponsors) and 20% of the sale of broadcast rights. The remaining amounts were divided equally between the participants.

However, with the approach of 1975, the success of this concept raised more doubts ...

idea was buried by conflicts and economics
The next meeting of the NFL team owners took place on October 31, 1974. Tex Scar and Andy Robustelli of Giants presented their thoughts on possible spring games in Europe. The minutes of the meeting say that specific decisions were postponed until the "discussion of the project by the NFL Commissioner and US government officials"

Under normal circumstances, no discussion of course would have happened. But the NFL was determined to go beyond North America, despite the unstable situation in Europe. The State Department had reasons for concern. In the summer of 1974, a conflict broke out between Turkey and Greece over control of Cyprus. The US ambassador on the island was killed, arms deliveries to Turkey were banned. In many countries where the teams were supposed to be located, the level of the terrorist threat grew. The Red Brigades in Italy and the Baader-Meinhof group in Germany were engaged in kidnapping.

In Spain, the Basque separatists killed the prime minister. There were fresh memories of the terrorist attack during the Olympics in Munich. The prospect of kidnapping Joe Neymit with the aim of obtaining a ransom did not look very far-fetched. Other problems were high inflation, a recession in the economy, and a shortage of energy resources.

Difficulties were also on the European side. Bruno Beneck recalled that Cap had attracted Pan American sponsorship. The airline was supposed to provide flights for teams in exchange for advertising. “When they came out of the agreement, the airline was accused of breaking up the league,” Beneck said. However, by that time many economic and political problems had accumulated that hindered the implementation of the project.

The final word on this issue was made at a meeting of NFL club owners on March 21, 1975 in Honolulu. Pete Rosell said that "the state of the US and European economies is currently making the project unfeasible."
Read more : Germany will have NFL
Not the best but still good.