On August 2, 1961, an exhibition match took place between the St. Louis Cardinals and the Toronto Argonauts. They played on the field of the Canadian team and according to the rules of Canadian football: twelve people on the field, other sizes of the field. However, this did not become a big problem for the experienced St. Louis players who won 36-7. It is worth noting that the then coaching of the Cardinals Pop Ivy had previously worked with the Edmonton Eskimo for four seasons and won the CFL's main trophy, the Grey Cup, three times. 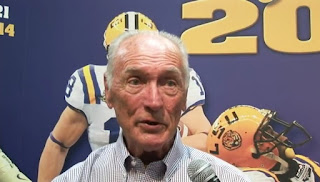 In 1967, the New Orleans Saints played the first preseason match in their history. In front of 26,000 spectators at Anaheim Stadium, the team lost to the Los Angeles Rams 7-16. Preseason then consisted of six games and Saints won the remaining five. In the regular season, things were not so rosy, with a result of 3-11 New Orleans finished last in the division.

Today would be eighty-three years old Billy Cannon, the outstanding running back and tight end, College Football Hall of Fame, and the first NFL draft pick in 1960.

William Abb Cannon was born on August 2, 1937, in the modest town of Philadelphia, Mississippi. Later, his family moved to Baton Rouge, which was one of the industrial centers of the United States during the Second World War. There, Cannon became the star of the school, leading his team to victory in the state championship, as well as setting Louisiana records in 100 yards and shot put. There, he first faced the law, receiving a 90-day suspended sentence for extortion.

Despite this background, many colleges showed interest in Billy. The Florida and All Miss programs were considered favorites, but he himself chose LSU: there he was guaranteed a job at a local car dealership during the holidays. In addition, this way he could study and play closer to home. Cannon began his student career in 1957, playing running back, d-back and panther. Almost immediately, he became a star here: in the second game of the season, the Tigers beat Alabama dry (Billy scored 140 yards with a clearance), and in the third they won against the Texas Tech 19-14 (Cannon had 36 yards on the lead, 59-yard touchdown on the reception, 31 yards pass, five antlers averaging 40 yards and a touchdown kick-off return). In the second year, he was already the recognized leader of the LSU, who won the national championship. At the end of the season, Billy made the NCAA All-Star Team having received three different versions of the Player of the Year awards and the SEC MVP prize. In 1959, he took the last missing trophy in the collection — the Heisman Prize. Cannon became the first in the history of the LSU and only the second in the history of the SEC conference. The prize was presented to him by the future President of the United States, Richard Nixon. The most memorable moment of that season was Billy Cannon's Halloween race — an 89-yard return of the pant to the scoring zone, which brought JOB a 7-3 victory over All Miss.

In the 1960 NFL Draft, Billy was the No. 1 Los Angeles Rams. The club's general manager, Pete Rozelle, signed a three-year contract with him with a salary of $30,000 and a bonus of $10,000. Two months later, Cannon signed another contract: with the AFL Houston Oilers, where he was offered 3,000 more a year and a Cadillac for his father. Rams was sued, rightly believing that Billy had no right to sign a second contract, but the judge ruled in the player's favor and annulled both agreements, believing that Rozelle was taking advantage of Cannon's naivety. The victory in this dispute actually went to the Oilers and the AFL. After the trial, the club signed a new contract with Billy, who became the first ever footballer to earn $100,000 a year.

In Houston, Cannon had four challenging seasons. Quite often, the rivals deliberately played roughly against the highest paid football player, he also clashed with coach Lou Rymkus. In 1960 and 1961, Billy led the Oilers to victory in the AFL championship, both times being recognized as the final MVP. Then injuries began to haunt him and for two years he was just a shadow of himself. As a result, in 1964, Cannon was traded to Oakland. Raiders head coach Al Davis had been looking for a place on the pitch for a talented newcomer for a long time, eventually putting him in the tight end position. This required a change in the team's offensive system, but the work paid off: in 1967, Billy became the AFL's most productive tight end, helping the team win the league championship and advance to Super Bowl II. He played for Oakland until the end of the 1969 championship, and spent the last season of his career with the Kansas City Chiefs. In total, Cannon spent eleven years in professional football, gaining 2,455 yards in clearance and 3,656 yards in reception. Twice he took part in the AFL All-Star Game and was included in the All-Star League team.

His further fate was not easy. On the one hand, Billy had a strong family: he met his future wife at school, they had five children. His son, Billy Jr., played in the NFL for Dallas in 1984. In addition to Louisiana State University, Cannon also completed graduate studies at the University of Tennessee and received a degree from Loyola University in Chicago. In his native Baton Rouge, he opened his own dental practice. On the other hand, due to bad investments and passion for gambling, Billy almost went bankrupt in the mid-1980s. He contacted the counterfeiters, was arrested and sentenced to five years in prison, served half the term. After his release, he managed to regain his dentist license. Ironically, in 1995, Cannon got a job in a Louisiana prison.

Billy lived the rest of his life in the town of St. Francisville. He died in his sleep at his home on May 20, 2018. Despite all the problems with the law, Cannon was and remains an idol for the entire state of Louisiana. A monument to him was erected in front of Tiger Stadium, where the LSU team plays. He was elected to the College Football Hall of Fame, and his number 20 was retired at the university.
Not the best but still good.