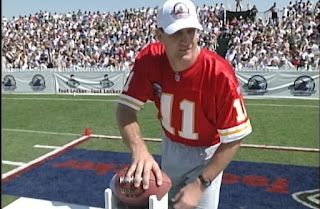 Elvis Grbac was born on August 13, 1970 in Cleveland. Three years earlier, his parents had emigrated to the United States from Croatia. During his school years he played basketball and football, one of his teammates was the future Heisman Trophy winner Desmond Howard. After graduation, Elvis planned to continue his career in the Ohio State, but after changing the coach of the program, he also changed his mind and went to Michigan. He played for the Wolverins from 1989 to 1992, won with the Gator Bowl team and two Rose Bowls. He left college with a record for passing attempts, completes, yards and touchdowns. They all lasted more than ten years.

Grbac was drafted by the Niners in the 1993 NFL Draft - he was drafted in the eighth round with a total of 219. In San Francisco, he found himself behind Steve Young, spending the first stage of his career backing up. In three years on the team, Elvis has a little over 3,000 passing yards with 18 touchdowns. In the 1994 league season, he played in eleven regular season games and two playoff games, including the Super Bowl.

In 1997 Grbac signed with the KC Chiefs. His rival for a spot on the squad was Rich Gannon, who had a slightly worse shot but was the leader in the locker room. Both quarterbacks have had a good season. The Chiefs won the AFC West Division and for the first time in club history finished on a winning streak of six matches. Before the playoffs, head coach Marty Schottenheimer opted for Elvis, while Gannon later left Kansas City. Grbac played for the team for four years, but was never able to take the team to the playoffs at least once again. His most successful season was 2000, in which Elvis passed 4169 yards with 28 touchdowns and was invited to Pro Bowl.

However, he left his mark on the history of the franchise - since 2000, Grbac has held the Chiefs' records for the number of compliments and scored yards per game: 39 and 504, respectively.

Prior to the 2001 season, Elvis signed a five-year, $ 30 million deal with the current Super Bowl winner Baltimore Ravens. He could not strengthen the composition.

Grbac has passed 3,033 yards and has thrown 15 touchdowns on 18 interceptions in the regular season, overall outperforming Trent Dilfer, who played for the Ravens a year earlier. Over the course of the season, he lost a starting spot to Randall Cunningham, then helped the team beat Miami Dolphins in the wild card round, but failed the divisional game against Pittsburgh Steelers. After the end of the season, the Baltimore management offered Grbac to revise the terms of the contract, and after refusing to expel him. After that, Denver invited Elvis to the place of the backup, but he chose to end his career.

A funny non-football story is connected with the name of Grbac. In 1998, he appeared on the cover of People magazine as "Sexiest Athlete of the Year." Later it turned out that this had happened by mistake. The editors of the magazine gave this title to Rich Gannon, and the photographer, who was tasked with "photographing the Chiefs quarterback", simply confused the players.

Grbac now lives in Chagrin Falls, a suburb of Cleveland. He and his wife Laurie have three children. Since 2019, he has been the sporting director and coach of the football team of his home school.