The Super Bowl 2023 will take place on the night of February 12-13 at State Farm Stadium in Glendale, Arizona. The game begins at 6:30 P.M. ET.
Home
New York Jets
NFL


Matt Snell, a New York Jets running back between the 1960s and 1970s, Super Bowl III winner and 1964 American Football League Rookie of the Year. 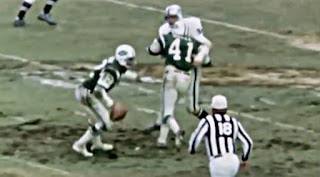 Matt Snell was born on August 18, 1941 in Garfield, Georgia, but grew up and graduated from high school on the western side of Long Island, New York. During his studies, he was the star of the school team and in 1959 was named Nassau County Player of the Year by Newsday newspaper. The talent did not go unnoticed by the leading college football programs, and Snell's further path lay in the Ohio State.

In the starting lineup of Buckeyes, Matt played three seasons. In the first of them, he came out in the place of the right midfielder, then played as a de-end and, finally, a fullback. The team ended the 1961 season with eight wins and one draw, and the Football Journalists Association of America recognized Buckeyes as champions (according to AP, the title went to Alabama). In 1963, he was recognized as the most valuable player in the Ohio State. Despite the fact that Snell made his further career as a runner, in 2000 he was included in the national team of the century Buckeyes precisely by the de-end.

In 1964, Matt entered the draft. In the AFL, he was chosen as the third overall number by the New York Jets and later it became clear that this was one of the most successful decisions of the club owner Sonny Werblin. In the NFL, he was ignored until the fourth round: the Giants picked Snell at number 49. The conditions offered by the Jets were also much better and he went to play in the AFL without hesitation.

Debuting with the Jets, Matt immediately set a club record with 180 yards against the Houston Oilers. In total, he earned 945 yards in his first year as a clearance and was voted the League's Rookie of the Year, also playing in the All-Star. Despite his merits as a runner, Snell also played an important role in the team's passing game with a confident block. Towards the end of his career, defending quarterback Joe Namath became his main focus and Matt was actually one of the first running backs to specialize in third downs. He played an important role in the victory of the Jets in Super Bowl III: in the second quarter, Snell scored the team's only touchdown in this game, opening the score. In that match, he had 121 yards in clearance, a Super Bowl record. In total, Matt played nine seasons with the team. A number of injuries have influenced the length of his career: in different years, he received injuries to his knee, tore Achilles, received many bruises. The most serious injury occurred in 1972 - in a match against Miami, after a hard joint, he suffered a ruptured spleen. An operation followed to remove part of it, and in March 1973 Snell officially retired.

The rest of Matt's life was connected with business. When he was a player, he owned a restaurant in Manhattan, but sold it after retiring from the sport. In the 1970s, he co-founded an investment company, then switched to construction. Snell later returned to the restaurant business. He now resides in New Rochelle, north of Manhattan.