Top 10 Candidates for NFL Offensive Rookie of the Year Award

Top 10 Candidates for NFL Offensive Rookie of the Year Award in 2020 season, Kyler Murray win it in 2019 season and who is next? 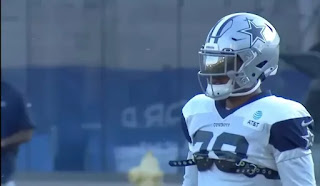 Cardinals quarterback Kyler Murray took the Rookie Of The Year Award to his home last year, ahead of Raiders Running back, Josh Jacobs. This 2020 season, history may repeat itself, as number one Joe Burrow has already got his hands on the keys to the Bengals offense. So, let's take a closer look at the favorite and see who will compete with him?

Unlike Los Angeles Rams and Miami Dolphins, Bengals has no battle for a starting quarterback. This place has already been given to Joe Burrow, he was well received by the team, also thanks to his comments on current topics in social networks. Joe is expected to return Bengals to the playoffs. Joe Mixon, A.J. Green, Tyler Boyd and another debutant, T. Higgins, should help the newcomer in this.
Burrow will start playing from the first week and this gives him some advantage over the competitors. Plus, with a good performance, quarterbacks always look preferable to other players. Running back Josh Jacobs had an excellent season last year but was unable to take the award away from Kyler Murray. For Burrow, in this context, an acceptable result will be the progress of Bengals' results compared to last season, this task does not seem overwhelming.

Andy Reid spent his first round pick on a runner and Clyde would have gotten enough snaps anyway. Now he is playing into the hands of his refusal to perform this season by Damien Williams. The LSU graduate is well knocked down and confidently stands on his feet, he is good both at the take-off and at the reception. Patrick Mahomes can trust him as a blocker. Some have suggested that the Chiefs coaching staff will try to keep the newcomer under pressure, but he finally won the national championship not long ago!

Other running backs who could qualify for the prize find themselves in a situation where time on the field will have to be shared with the veterans. It's about D'andre Swift from Detroit Lions and Jonathan Taylor from the Colts. They are unlikely to touch the ball so often that they have a chance of repeating Jacobs's relative success.

According to many experts, CeeDee Lamb was the best receiver in the latest draft. He is great after taking the ball, he has great body control. The only circumstance that can prevent him from showing himself is a large number of bright attacking players in the Dallas roster. Cowboys fans have the opportunity to watch arguably the best passing offense in the NFC.

The Denver office has seriously improved the receiver corps, besides Jeudy, taking on KJ Hamler. The lineup also includes tight-end Noah Fant, running-backs Melvin Gordon and Phillip Lindsay. The next step in development is expected from quarterback Drew Lock. Recent seasons have shown us that beginners are pretty quick to hit the league. With this aspect of the game, Jeudy is fine and if he gets the ball, his impact on the Broncos will quickly become noticeable.

During his student career, Shenault worked most successfully near the scrimmage line, that is, after contact with the defender. In good health, he was one of the most effective hosts in the NCAA. Jacksonville's offense is not rich in talent, and in these conditions Laviska has every chance of becoming a favorite target for Gardner Minshew.

In the offensive line, the Vikings Jefferson will follow Adam Thielen. His forte is slot-based play, and it shouldn't be difficult for an experienced Gary Kubiak to integrate him into offensive schemes and create the right conditions for achieving goals. Jefferson could become a very important player for Minnesota, and if he can fully replace the departed Stefon Diggs, then he will be a full contender for the Rookie of the Year Award.

Now Raegor is injured and this complicates his task. The reality is that the selection of hosts in Philadelphia leaves a lot to be desired. Chosen in the first round, Jaylen could be their secret weapon. If he fully recovers, the fans of the team will have fewer reasons for worry.

Like Raegor, Aiyuk is now healing his injury. In the meantime, you can fantasize about how he can be involved in the offense of Kyle Shanahan. Here, the newcomer can be compared to Deebo Samuel. Both players are distinguished by their versatility, and the lack of size is compensated for by speed and flexibility. Also Aiyuk can be very useful as a returns specialist.

The Colts offense has become too straightforward since Ty Hilton's injury last year. For a team going to the Super Bowl, this dependence on one player is unacceptable. In the offseason, the club's general manager did some serious work on the depth of the squad, spending four of the first five picks on offensive players: running back Jonathan Taylor, quarterback Jacob Eason, line Danny Pinter and host Michael Pittman. The last of them has every chance of becoming one of the discoveries of the season.

Mims is another of the league's rookies starting the season on the injured list. On paper, the Jets look like one of the poorest in talent. The team is not expected to have outstanding results, but rather to “fight” for the first pick in the 2021 draft. The range of goals for quarterback Sam Darnold is limited and in these conditions Mims gets more opportunities. If he solves his health problems, he is potentially able to attract significant attention to his person.