Nate Washington, two times super bowl winner with Steelers, one of the best nfl wide receivers, Nate has a great football seasons with Titans and Texans 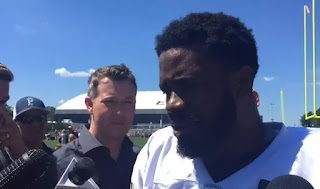 Nate Washington's , from an undrafted free agent from a humble program to a two-time Super Bowl winner with the Pittsburgh Steelers.

Nate Washington was born on August 28, 1983 in Toledo, one of the largest cities in Ohio. He grew up without a father, during his school years he found an outlet for himself in sports. Nate was included in the national team of stars of the city and state, but did not receive any serious proposals from the programs of the first division. During the holidays, Washington worked as a lifeguard on the beach in a city park. After graduating from high school, he entered Tiffin University, whose team is called the Dragons and plays in the second division of the NCAA.

For Tiffin, Washington has become a legend. He spent four years in the team and left it as the owner of eight individual records. In particular, he owns the best program achievements in terms of the number of yards scored per game, season and career. Several times Nate was included in the national teams of the stars of the II division. Naturally, there was no talk of any invitations to the harvester or increased interest from the NFL team scouts. No one picked him in the 2005 draft, but after Washington signed a contract with Pittsburgh as a free agent. For Tiffin, this achievement was more significant than all his records - for the first time in the modern era, a college graduate became an NFL player. Prior to that, its representatives managed to play only in alternative leagues and Canada. Five years later, Nate's path will be followed by running back Chris Ivory.

In the first regular season for itself, Washington appeared on the field as a receiver in only one match. The rest of the time, his work was limited to training and special teams. However, he had a chance to play in the playoffs. In the conference finals, Nate chalked up the first ball in his career. He also entered the field in the winning Super Bowl XL for the Steelers. The following season, he became the team's main slot receiver, replaced Hynes Ward several times in the starting lineup and even became the best in the league in terms of average number of yards per reception. He remained an equally useful player for Pittsburgh in 2007 and 2008. In his last season with the team, Nate won his second championship ring.

In March 2009, Washington signed a $ 27 million six-year contract with Tennessee Titans. As part of the Titans, he has become a more prominent figure and player in the starting lineup. In 2011, Nate scored over 1000 yards on reception for the first time in his career and made a record seven touchdowns. In 2013, he was chosen as one of the team captains. After Titans, Washington played for Houston Texans for another season, and ended his career at the Patriots training camp before the start of the 2016 season. In total, during his league appearances, Nate scored 6,954 yards on reception. This figure is among the top ten among non-drafted players.

Now Nate lives in his native Toledo, has two daughters. His main occupation is working in several charities and running an annual football camp for children.