Brad Johnson, the winner of Super Bowl XXXVII with the Buccaneers and a two-time Pro Bowl

Brad Johnson, the winner of Super Bowl XXXVII with the Buccaneers and a two-time Pro Bowl. 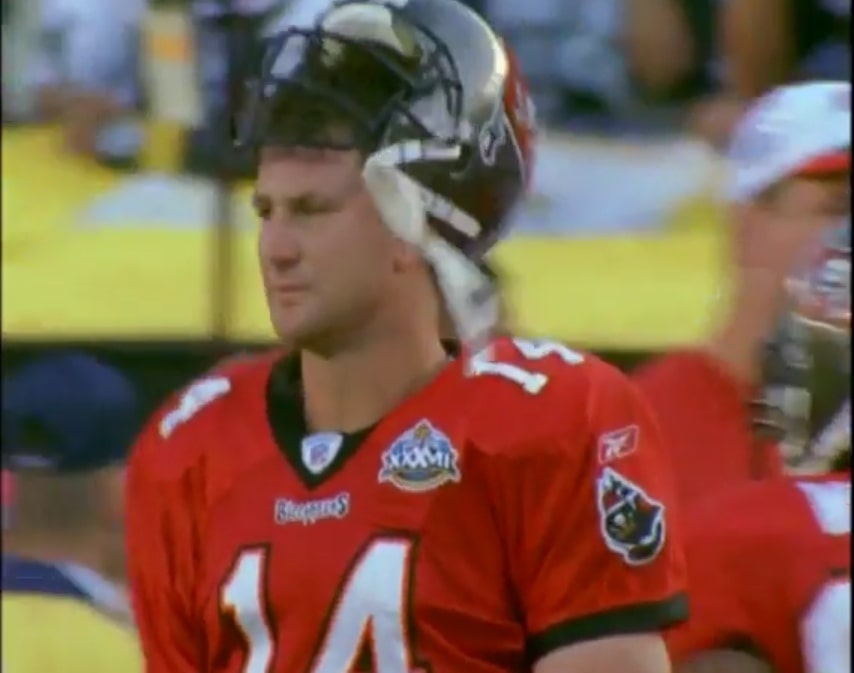 September 13, 1987 The Tampa Bay Buccaneers beat the Atlanta Falcons 48-10, while quarterback Steve Deberg made five passing touchdowns, setting a franchise record. So far, other quarterbacks on the team have only managed to repeat it.

Brad Johnson, the winner of Super Bowl XXXVII with the Buccaneers and a two-time Pro Bowl.

James Bradley Johnson was born on September 13, 1968 in Marietta, Georgia. At school, he played as a quarterback and was considered one of the country's greatest talents, although he was more successful on the floor. He received a Florida State athletic scholarship as a basketball player and from 1987 to 1989 was one of the main players on the varsity team. He joined football only in 1988, most of the time entering the field as a holder. In the starting lineup of the Seminole, Brad has played only seven games and has only 1746 passing yards in his career. However, in the 1992 NFL Draft, Minnesota Vikings picked him in the ninth round at number 227.

Johnson spent his first two years in the NFL as the team's third quarterback, sitting behind Rich Gannon and Sean Salisbury. It wasn't until 1994 that he advanced to the second position in the team's roster and finally made his league debut. In the spring of 1995, looking for an opportunity to prove himself, Brad went to play in Europe. As part of the London Monarchs, he played a season in the World Football League and became its best quarterback in terms of the number of compliments. A year later, Johnson waited in the wings and entered the Vikings' starting lineup for the first time, replacing the injured Warren Moon. Twice in the 1996 regular season, he was named NFC Player of the Week, but that was just a flash. However, it was as a Minnesota player that he made history: On October 12, 1997, in a match with Carolina, Brad caught a shot thrown by him and carried it three yards to the end zone. Thus, he became the first in league history to score a pass to himself. At the ESPY Sports Awards, the moment was voted the NFL's Draw of the Year. However, now the uniqueness of this achievement has faded somewhat: in 2018 the same thing, but in the playoffs, was done by Marcus Mariota from Tennessee Titans.

After the Vikings, he had two successful seasons with the Washington Redskins. As a Redskin player, Johnson first received a Probowl invite, hitting 4,005 yards in 1999 and setting the franchise record for the most compliments. He then moved to Tampa Bay Buccaneers, with which he reached Super Bowl XXXVII in 2002 and won it. At the same time, Brad got to Probowl for the second time, where he won the Quarterback Challenge competition. After a triumphant season, the Buccaneers were in trouble. Johnson, despite his good statistics, lost and ended up on the bench. Finally, in 2005, he was expelled, he agreed to return to the role of backup in Vikings.
Brad had a good first season since his return, returning to the field after Daunte Culpepper's injury. Nevertheless, age made itself felt. In 2006, he was the oldest quarterback in the NFL. His cautious playing style, which earned him the nickname "Charlie Checkdown", caused the displeasure of Vikings fans. He retired from the club in 2007 and replaced Tony Romo in Dallas Cowboys for another two years before retiring. During his long and certainly worthy career, Brad Johnson has played 178 regular season games, gaining over 29,000 yards.

Now Brad lives in Georgia with his family, organizing football training camps. His son Max, naturally a quarterback, started his career this year with LSU.