Mike Evans is an American football WR for the Tampa Bay Buccaneers. Texas A&M Star had been Drafted 7th overall by the Buccaneers in 2014 NFL draft. He's not only one of the best NFL wide receivers ever, he's also a Super Bowl winner, Pro Bowler, and in his way to the NFL Hall of Fame. Here's the 10 Facts You Didn't Know About Mike Evans. 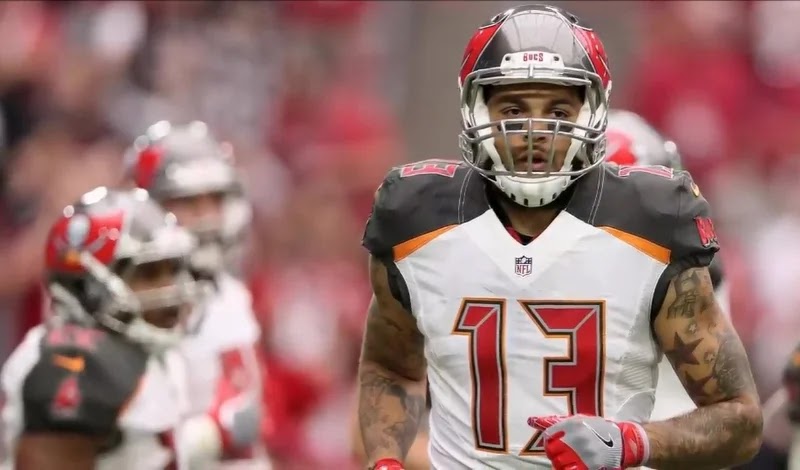 10. He was a three-sport star in high school.

Like many stars in the NFL, Evans also ran track for the Galveston Ball High School team, the Tors. He, however, stood out more for playing basketball than running track.

In track and field, he competed mostly in the jumping events, excelling in the triple and long jumps. In basketball, he averaged about 18.3 points, 5.2 assists, and 8.4 rebounds per game.

He still loves basketball, and is particularly a fan of Dwayne Wade, who has in the past spoken about their shared admiration for each other.

He is one of the most talented wide receivers in the NFL, and holds several NFL and Buccaneer records.

He also holds more than 10 franchise records for the Buccaneers. Read Also : 10 Facts You Didn't Know About Tom Brady.

8. He had a rough childhood.

Many star athletes experience hardship growing up. In fact, in most cases, it is this hardship that eventually drives them to the particular heights they later hit in life.

For Evans, things were tough growing up. His mother apparently had him when she was just 14 years old, and people would often think she was his big sister when she dropped him off at school.

He lost his father quite young, and his family was forced out of their home when a hurricane hit the coastal city of Tampa. They moved from one hotel to the next, finally settling into a meat market that had been converted into apartments.

7. Evans’ father and daughter are his biggest inspiration.

When he found out that he had been drafted 7th overall by the Buccaneers in 2014, he cried because it meant he could finally provide a good life for his daughter.

Having grown up in hardship, he knew the value of giving his daughter the life he never had. He lives for his family, with his daughter and late father being his biggest sources of inspiration.

He has tattoos of both, one on his left arm spelling out his daughter’s name, and one on his right that reads “Rest In Peace Mickey”, the nickname of his father, Mike Evans Jr.

His father always wanted him to play sports, and is part of the reason why he wanted to excel in every sport he played. He wanted to make his father proud.

6. His father was murdered when he was 9 years old.

Evans had a particularly tragic childhood. When he was just 9 years old, his father, Mickey, was killed by his uncle after Mickey had reportedly subjected Mike Evans’ mother to physical abuse.

This was in 2002, and he admittedly was angry about this for a long time. However, in the years that followed, he admits he was eventually able to forgive his uncle after visiting him in prison.

5. Evans only played football during his senior year of high school.

He loved basketball so much that many would have been forgiven for thinking that would have been the sport he pursued. He was a star on the court, and particularly loved dunk contests.

At his high school, he was known for his windmill dunks. In fact, he actually got away from football to concentrate on basketball in high school for a while, only coming back to play during his senior year.

He once confessed that he had such big dreams that he wanted to play in both the NFL and the NBA.

4. He is good friends with Johnny Manziel.

Manziel has not had the kind of career that Evans has had. One would say he has been on somewhat of a downward spiral in the past few years. He, however, maintains a strong friendship that goes all the way back to their college days.

They would play pickup games at the Aggie student recreation center at A&M. They are such good friends that Manziel was not only one of the groomsmen in his wedding, but also gave a heartfelt speech to the guests.

3. Evans has a reputation for helping people.

Given his past, it is little wonder that he is so committed to helping people out. Throughout his career, he has come out strongly to support individuals in need. He, for instance, donated $10,000 to the GoFundMe account for a former classmate, Devyn Holmes, who had been accidentally shot in 2017.

In 2018, he also donated to the family of Gregory Hill, who had been killed by a St. Lucie County Sherriff’s Deputy in 2014. This case became infamous after the jury reportedly awarded $4 for the family in the ensuing wrongful death suit after ruling that he had been 99% responsible for his death.

He also famously faced the Madden 18 champion in a match to raise money for the families of those lost and injured during the Jacksonville Landing shooting.

2. He married his long-time girlfriend Ashli Dotson in 2016.

He has been in a long-term relationship with Dotson and proposed to her in 2014. Together, they have a daughter, Ariah Lynn Evans, who was born in 2016. Little is known about Dotson’s life, apart from the fact that she is a Texas native.

1. Evans is a huge fan of Harry Potter.

He has always been a huge fan of Harry Potter, with tweets from his past showing just how keenly he followed the books and movies growing up.

He, however, took it a step further at his wedding with a huge multilayered Harry Potter themed cake. The groom’s cake, which had 4 layers representing the four houses at Hogwarts, created a lot of social media buzz, including some light-hearted ribbing from friends and acquaintances.

That’s all 10 Facts You Didn't Know About Mike Evans, tell us if you think Mike Evans will be in the NFL Hall of Fame.!